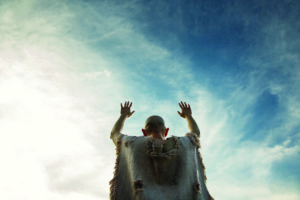 I have been a prayer warrior for GES since its foundation. The promise of eternal life, made possible by the blood of Christ (Acts 20:28), is the only gospel that can provide redemption for the sinner who trusts Christ alone for salvation from eternal condemnation. I have served as a Free Grace pastor for fifty years with my beloved wife, Susan, by my side as a partner in ministry. During many of those years, I served as a Bible college instructor and as a secular university professor. I have served on mission boards, in Bible youth camps, radio programs, and as a Lt. Colonel chaplain in the U.S.A.F. auxiliary. My favorite thing is winning souls to Christ and preaching the Word of God.

This was all disrupted when I began to have unpredictable seizures—in the pulpit and elsewhere—which necessitated my regretful retirement from the pastorate.

I have counseled hundreds of Christians to analyze why negative things like this happen to born-again saints. Now it is my turn to analyze why and to trust God with what is happening in my life.

The following are some things that should be considered.

Though none of us are worthy of our salvation (Rom 3:10, 23), we should hope our current demise is an example set by Job. Jehovah asked Satan if he had considered His servant, Job—his upright fear of God and his shunning of evil (Job 1:8). Satan argued that this was true because Jehovah was so good to Job. So God told Satan that he could touch anything Job had, but not Job himself. Job went so far as to express that even if he were slain, he would trust God (Job 13:15). What a testimony! We should ask God to give us a similar strength of faith to trust Him in our affliction.

Furthermore, I have counseled afflicted saints that their difficulties do not mean that God did not forgive them when they took their sins to His throne of grace in sincere confession. Sometimes saints have to learn hard lessons that can also serve as a warning to other believers.

For example, Israel left Egypt eternally redeemed after the first Passover (Heb 11:29). However, when they rebelled against God in the wilderness, God forgave them (Num 14:20). Nevertheless, those twenty years old and older would die in the wilderness and never enter the promised land of Canaan. This does not mean that they were unforgiven, but it serves as a warning to saints to not show contempt to God over their difficult circumstances (Num 14:23-33).

Another example is Moses, who appeared with Christ on the mount of transfiguration and who is in heaven today. Because of his disobedience as a saint, his life’s goal to take Israel into the promised land was taken from him. He was only able to watch it from Mt. Nebo as Joshua led them (Deut 32:48-52). This does not mean that he was unforgiven, yet it is instructional for saints today.

King David was a saved man after God’s own heart (Acts 13:22) whose throne would be established forever (2 Sam 7:12-16), yet, because he counted the fighting men of Israel against God’s will (1 Chron 21:1ff), he was told that he would not build a temple in Jerusalem. Instead, his son Solomon would (1 Kgs 8:17-19). This does not mean that God rejected David’s confession of sin. This teaches us that, even though our sins are confessed and forgiven, Christians can trust God to use temporal on-going consequences for instructional purposes.

However, the unfortunate truth is that there are some eternally saved saints who are openly or secretly living in sin and provoking God to ordain punitive catastrophe in their lives. This was the case of some saved Corinthians who were pretending to be in fellowship with Jesus while living in willful sin, thus bringing judgment upon themselves (1 Cor 11:26-29). For this reason, God ordained literal death on some of these saints (1 Cor 11:30). Paul made it clear that this is discipline, not damnation (1 Cor 11:32).

In 1 Cor 5:5, Christians were to deliver a brother in Christ to Satan for the destruction of his sinful nature (i.e. death) but this man’s spirit would be saved in the day of the Lord. Thus, this was not eternal damnation, but it was punitive discipline.

If self-examination and Spirit conviction through the Word leads a saint to conclude that this applies to him/her, this person should confess his sin and turn to living for the glory of Christ and trust Him in whatever circumstances might follow.

Negative difficulties in a Christian life can be positively instructional and educational. Thus, and very importantly, a saint, who still has his fleshly nature, can trust God to ordain difficulties in life in order to prevent future sin and self-exaltation. The Apostle Paul was an excellent example of this in (2 Cor 12:7-10). Dear Christian, God can be trusted with such difficulties in your life.

Christians should realize that God’s hand of discipline is proof of His love (Rev 3:19). We have a right to confess our sins and ask God to withhold His hand of discipline (Ps 38:1-2), confessing to Him that we are under conviction, and yet trust Him if He does not withhold negative and unpleasant consequences for our sinfulness. Let Him know that you are deeply regretful for your sin (Ps 32:4-7). We should further take note that many Christians who have ignored the Lord’s rebuke and advice have forfeited their privilege to effectively pray to him whenever they desire (Prov 1:25-30; see 29:1).

So, Christian, I will not judge the cause of the difficulties in your life. Nonetheless, it is your duty to examine yourself, make sure your sins are confessed, and to unconditionally trust God with whatever circumstances He ordains in your life. Remember, nothing can last any longer than the rest of your life, which is but a fleeting moment compared to the eternity you will enjoy with Him.

John O. Hosler is a retired pastor and chaplain.