The church I attend stands firmly on the truth of the inerrancy of the Scriptures. (That is the teaching that the Bible has no errors in it.) The Sunday school I attend is blessed with several godly men who are able to teach the inerrant Scriptures. Not too long ago, one of those men opened his lesson with John 2:23-24. He read the passage to the class:

Now when He was in Jerusalem at the Passover, during the feast, many believed in His name when they saw the signs which He did. But Jesus did not commit Himself to them, because He knew all men.

After reading that Scripture, he went on with his class.

But my attention was arrested by a comment from a woman sitting toward the back of the room. There were perhaps thirty or forty people in the class that Sunday, and in a stage whisper loud enough to be heard by most of the people in the classroom, she said, “Yes, but did they really believe?”

I spent the rest of that class and another few weeks thinking about her question. Since the Biblical text says those people at the Passover believed, it seemed to me that her question raised questions about the reliability of the Biblical text. The question whether those who saw the wonders Jesus did at that Passover did actually believe seems to put doubts in the minds of the faithful. So I wondered where the question comes from. What would cause born-again people to question a rather straightforward statement of the Scriptures?

After a little reading and thinking and coming to some conclusions, I pondered whether to present my thesis inductively or deductively. Lest there be confusion about my message, I will tell you up front: We, the church, the Body of Christ, have been taught by Evangelical Christian teachers—I am willing to say unwittingly on their part—to doubt the Word of God. We have been taught by Christian teachers to question whether the Word of God means what it says.

Here are three examples from books in my library.

Alvah Hovey, in a commentary on the Gospel of John published in 1885, writes on John 2:23:

It appears from this verse that he [Jesus] wrought several miracles during this Passover, in Jerusalem…These signs led many to believe that Jesus was the promised Christ. But their faith was mere belief on the ground of evidence, implying no radical change of character. It might lead to further inquiry, as in the case of Nicodemus, but it was not in itself a proof of willingness to serve God by forsaking all to follow Jesus. To believe on one’s name is to believe on what that name represents, whether of character or of office (p. 93).1

Hovey then explains that verses 24 and 25 “afford proof …that the Evangelist did not mean to ascribe saving faith to the many spoken of in verse 23” (p. 93).

A second example of an Evangelical teacher undermining believers’ simple trust in the plain-sense truthfulness of the Scriptures comes from Edwin Blum’s commentary on the Gospel of John in Dallas Seminary’s Bible Knowledge Commentary.2 In the New Testament edition, Blum writes on John 2:23, “The effect of these miracles (which were probably healings) was to elicit faith on the part of many people.3 They believed in His name, that is they trusted in Him” (p. 280). So far, so good. Blum seems to be taking the Biblical text at face value. But then, he writes, “This was not necessarily saving faith as the next verse implies. They believed He was a great Healer, but not necessarily a great Savior from sin” (p. 280).

To justify his own doubt of the veracity of God’s word, Blum writes concerning verse 24, “Jesus knew that a temporary excitement or a faith based on signs was not sufficient” (p. 280). And we might justly ask how Blum knows what Jesus knew since the text says nothing about “a temporary excitement” or the insufficiency of a faith based on signs (esp. in light of John 20:30-31, which says that signs were designed to produce saving faith).

A third and final example for our purposes in this article, that is, that Evangelical teachers, perhaps unwittingly, undermine the confidence of believers in the written Word of God, comes from F. F. Bruce. In his commentary on the Gospel of John, Bruce titles the section on John 2:23-25 “Superficial Faith.” Right away we know what he is going to do:

Jesus made a clear distinction between those who were superficially impressed because they saw the bare signs and those who penetrated beneath the surface and grasped the truth that was signified by the signs. . . . There are two levels of believing in Jesus’ name – that spoken of in John 1:12, which carries with it the authority to become God’s children, and that spoken of here. The former level involves unreserved personal commitment, the practical acknowledgment of Jesus as Lord, but it will not be attained as long as “we see the signs but see not him” (pp. 77-78).4

These three Evangelical teachers illustrate an all too common phenomenon: what the Scripture calls faith too many Evangelical teachers say is deficient in some way. Hovey wrote that the faith of those who saw Jesus perform signs “was mere belief on the ground of evidence.” Blum, appealing to special knowledge of what Jesus knew, writes that though the people at the Passover believed in Jesus’s name, their belief was not genuine and thus not salvific. And Bruce writes that what the Scripture calls faith in John 2:23 is deficient and “superficial” because it lacked commitment.

What are these Evangelical teachers doing? What are they teaching us? They are teaching us mere mortals that we cannot trust the Word of God to mean what it says. Rather, in order for us to understand what the Bible is saying we have to read their commentaries.

What happened? These writers rightly felt a tension between John 2:23 and John 2:24. The people at the Passover believed in Jesus’s name, but He did not entrust himself to them (or, we might say, He did not believe in them). Rightly, we, as did the three commentators referenced above, want to know how to resolve the tension between the two verses.

Hovey, Blum, and Bruce erred in their methodology.

They started with verse 24, assuming they knew what verse 24 meant, and then they went back to verse 23 to explain verse 23 in the light of verse 24. We know they went in the wrong direction because they made verse 23 mean the opposite of what it plainly says. 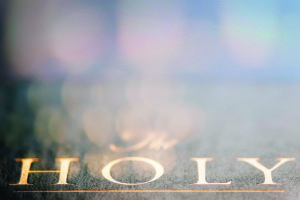 Here is a better approach. To understand what the Lord has for us here in this passage, let’s move from verse 23 to verse 24, from the clear to the less clear.

Verse 23 says that “many believed in His name.” John 1:12 tells us the theological significance of believing in the name of Jesus: “to those who believe in His name” Jesus gives the privilege of becoming the children of God through regeneration.

If we take the plain sense of John 2:23, having compared it with the theology of John 1:12, what would we conclude about the many at the Passover who believed in the name of Jesus? Reasoning on the authority of the Word of God in John 1:12 and on the reasonableness of the Word of God, that is, we expect the Word not to contradict itself, we conclude that the many of John 2:23 are born of God. They are regenerate. They have experienced the new birth. If they had died at the end of John 2:23, they would have gone to heaven. In truth, the many of John 2:23 have indeed long since left the body of this flesh behind, and we too who know the Lord will see them in heaven when we leave this old, corrupt flesh behind.

What, then, does verse 24 mean? “But Jesus Himself did not entrust Himself to them for He knows all men.” The many who believed were brand-new baby believers. They had much to learn. They needed to be nurtured in this new life so that they might grow and become useful in the Master’s service.5 They were not yet ready for meat but needed first to be nurtured on the milk of the Word (cf. 1 Cor 3:1- 4). Spiritual growth was necessary for them to become trustworthy servants.

Earlier in Chapter 2, the Apostle John already gave us a lesson in discipleship just as he gave us a first lesson in the doctrine of regeneration. John recounted the incident of Jesus turning water into wine at the wedding in Cana. We learn what servants of Jesus are to do, “Do whatsoever He says to you” (v 5). Jesus tells the servants at the wedding to fill the water pots, and they fill them to the brim. He tells them to draw out some of the water to take to the master of the feast, and they obey. And John makes, then, the telling point that the master of the feast did not know where this great wine had come from but “the servants who drew the water knew” (v 9). It is those who have learned to serve the Lord who are privy to the secrets of the kingdom. As the many who believed in His name in 2:23 learn from Him to follow Him, He will entrust more of Himself to them. And so it is for all of us who seek to be the King’s servants.

Hovey, Blum, and Bruce have illustrated for us a phenomenon that happens too much in our Evangelical Christian world. Evangelical teachers far too often undermine the power and authority of the Word of God by their twisted eisegesis which comes from the doctrines of men rather than the Word of God. Such twisted non-explanations sow seeds of doubt in the mind and hearts of believers in Christ—doubt in our own ability to understand the Scriptures under the illuminating guidance of the Holy Spirit, doubt in the Word itself that it means what it says.

Let us hold fast to the traditions as we have been taught. Our Lord Jesus Christ, as the authorized and only Giver of the gift, offers the gift of everlasting life to each and to all who believe in His name.

Wes Spradley graduated from DTS in 1972. He taught writing and literature at UT San Antonio for seventeen years and spent 17 years in pastoral ministry.

2. Dr. Blum was one of my professors at DTS and was and is a very godly man. I am not questioning his godliness or his integrity. My concern is that what he wrote unintentionally undercuts the authority of God’s Word, and that is a commentary designed to undergird that authority.

5. Zane Hodges suggests that they, like Nicodemus, were not yet willing to confess Jesus before men. Hence the Lord was not yet ready to entrust them with discipleship instruction until they became willing to confess Him. See Faith in His Name (Denton, TX: Grace Evangelical Society, 2015), pp. 46-48, 61-62.