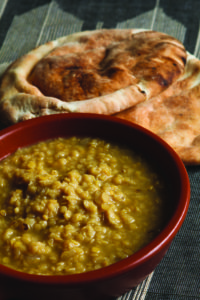 Relationship conflicts are inevitable, going all the way back to Cain and Abel. The most severe and lasting ones seem to be with kin. Do you have a relative or ex you try to avoid due to something done or said years ago? You may think it’s too late to bring up now, and besides it was mostly their fault, but isn’t a clear conscience better than simmering resentment? Although the steps necessary for forgiveness and reconciliation are excruciatingly humbling, Jacob’s procedure in Genesis 32–33 can be a pattern for us.

Jacob’s struggle with Esau began in utero (Gen 25:22). Growing up they had little in common, and parental favoritism fueled their differences. Esau despised his birthright of God’s Covenant given to Grandpa Abraham and bartered it to Jacob for a meal (Gen 25:34). Then Jacob deceived his father Isaac for the covenant blessing (Genesis 27). Both events were irreversible, but Esau severely regretted them and blamed Jacob (Gen 27:34–38). Hebrews 12:14–17 says Esau tearfully sought in vain to get his dad to repent, but Isaac let the blessing stand (see Heb 11:20). God’s promises cannot be broken, and God had said the elder would serve the younger (Gen 25:23).

Jacob could be viewed as the less culpable party for two reasons: (1) Esau gave away the birthright, and didn’t the blessing go with that? And (2) it was mother’s idea; Jacob thought it too risky at first but then obeyed her. After that, Esau, the hunter, threatened to kill Jacob who went into exile. Years later, when Esau went to meet Jacob with 400 men, “Jacob was greatly afraid and distressed” (Gen 32:6–7). With his family in jeopardy, Jacob realized Esau must be pacified.

Jacob had experienced conflict with Uncle Laban for the twenty years they lived together. Trying to avoid confrontation, Jacob secretly packed up and left (Gen 31:20), but Laban “hotly pursued” him (Gen 31:36), bringing along his kinsmen. God intervened by speaking to Laban in a dream (Gen 31:24, 29, 42). Consequently, both parties aired their grievances and made a pact never to harm each other (Gen 31:44). Covenants are always initiated by a superior, in this case, Laban, to the inferior, Jacob. He agreed to all Laban’s terms and offered a sacrifice, which they ate together. After proper goodbyes, they went separate ways.

As Jacob traveled on, perhaps he reflected on the way God had intervened to protect him and resolve his in-law conflict. In any case, God provided another experience in Gen 32:1–2, the lesson of Mahanaim,1 meaning Two Camps. There the “messengers of God” met him going back to Canaan as they had in Gen 28:12 when he left the land. Allen Ross wrote, “Mahanaim, like Bethel, was a spot where…the invisible was opened to the visible.”2 God vividly reminded Jacob that his earthly camp was surrounded by God’s heavenly camp.

Secondly, with Esau and 400 men approaching, Jacob took his best option—he called on God. His prayer in Gen 32:9–12 is a model for all believers, especially during a crisis. Jacob acknowledged his relationship with God and God’s past goodness. He admitted his unworthiness. Then he asked for deliverance, and finally, he affirmed God’s promises.

God’s third preparation took the form of a nightlong wrestling match, completing Jacob’s transformation from arrogant schemer to humble servant of God, who could also be subservient to Esau. Although Isaac’s blessing to Jacob had said his mother’s sons would bow to him, Jacob was now willing to take full responsibility for his actions that had caused their separation.

Although Genesis records the discussion between Jacob and Laban, it does not record that Jacob and Esau discussed the reasons for their conflict, possibly indicating that component is not always wise. Instead, Jacob humbled himself and offered restitution. The steps he took still work today.

First, Jacob initiated contact (Gen 32:3–5), stating that he had been with Laban, but not mentioning why (v 4). He simply asked for Esau’s favor, calling him “my lord” and himself “your servant.”

Second, he took precautions to protect his family (Gen 32:6–8), dividing them into two camps. Jacob could not be sure there would be no casualties, so he sent nearly 600 animals as gifts; then he himself went first. Perhaps this principle speaks to the necessity of keeping personal conflict private, between you and the other party, and not involving the whole family or getting others on your side. This will prevent escalation.

Third, pray (Gen 32:9–12). Ross noted, “God’s people can pray with confidence for deliverance from their enemies because of His promises to them.”3 Prayer also gives a proper perspective of our dependence on the Great Forgiver, so we can extend forgiveness to others.

Fourth, make restitution extravagantly (Gen 32:13–21, 33:8–11). While Ross sees this as Jacob’s lack of trust in God by attempting to buy Esau off, Bruce Waltke says, Jacob sends “magnanimous gifts, in dramatic increments, and aims diplomatically to pacify his offended brother…Jacob calls his gift ‘the blessing’….He is ready to restore the blessing and to recognize Esau as lord, trusting God to keep His covenant promises.”4 Restitution can be costly, but personal sacrifice shows how seriously you want to reconcile.

Fifth, clear things up between you and God (Gen 32:22–32). Forgiving and asking for forgiveness involve a spiritual battle, and admitting your contribution to the failed relationship is crucial. Intense and painful wrestling with God can transform us into His useful servants. As with Jacob’s permanent disability (at the end of his life he is still leaning on his staff as Heb 11:21 mentions), so our struggles with God change us for life and help us lean on God.

Sixth, meet in person, staying humble, respectful, and vulnerable (Gen 33:1–11). As the brothers approach each other, imagine the difficulty of Jacob bowing to Esau seven times with his newly dislocated hip. Perhaps this very thing answered Jacob’s prayer by softening Esau’s heart and eliciting sympathy—how could he attack a cripple? Despite the suffering and inconvenience, embrace your God-ordained thorns in the flesh. William Cowper wrote: “Ye fearful saints, fresh courage take; the clouds ye so much dread are big with mercy and shall break in blessings on your head.”5

Jacob humbled himself before Esau, not only in posture, but also by calling him “my lord” five times and asking for Esau’s favor.6 No self–defense or justifying on Jacob’s part. He presented himself as the weaker party, the one who needed forgiveness. “Whereas conflict with Laban is resolved through a treaty of nonaggression, conflict with Esau is resolved through genuine expressions of repentance, extravagant gifts, and exaggerated humility.”7 In Esau’s response, “Keep what you have for yourself,” Waltke noted a possible double entendre—that Jacob can keep the birthright and blessing (Gen 33:9).8 However Jacob prevailed on Esau to accept his gifts. In his new identity as Israel—God’s Warrior—he struggles and prevails with God and men (Gen 32:26–28).9

Seventh, maintain friendly contact (Gen 33:12–20). Reconciliation does not mandate frequent contact. For example, while divorced couples need to go through the process of forgiving each other, that does not mean they need to remarry or become best buds. Jacob knew God wanted him to return to Canaan (Gen 28:15, 31:13, 32:9) so he did not go to Seir at Esau’s invitation. But evidently, he and Esau cooperated regarding family affairs, such as when Isaac died (Gen 35:27–29).

The Bible tells us Jacob eventually returned to his father Isaac at Hebron (35:27), but we don’t know if Jacob went through a reconciliation process with him. Isaac had erred in trying to bypass God’s directive that the elder would serve the younger, but Jacob had certainly been wrong for deceiving Isaac by impersonating his brother.

Jacob, like Israel, had learned to face conflict, admit fault, and heal relationships. From heel-grasper to limping wrestler, he had become dependent on his promise-keeping, trustworthy God.10 He could forgive and ask for forgiveness. Does it always work?

In my case, where I unintentionally offended someone I love, I have followed these seven steps, but have not yet experienced the desired end. The person has not been willing to meet or communicate with me, so I continue to practice step #3, asking God to work in our hearts.

Requesting someone’s forgiveness is a deeply humbling experience. Making restitution requires expense and sacrifice, but the resulting reconciliation will be worth it. Hebrews talks about Esau in the context of pursuing peace with everyone (Heb 12:14). Genesis 32–33 shows us how.

Marcia Hornok is the managing editor for CHERA Fellowship magazine.

3. Ross, Creation, 545. However, Ross goes on to say that Jacob did not need to seek to appease Esau by “giving away God’s blessing on them.”

10. Hosea 12:4–6 indicates that Jacob’s wrestling with God had taught him to wait on God continually.