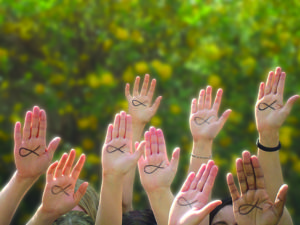 In reading my Facebook feed I frequently come across various quotes that my friends have decided to share. Unfortunately, last week, I ran across this one:

Does failing to confess prove you are not a Christian?

This quote shows a failure to understand what it takes to have eternal life, or what we have our assurance in. If we do not understand those two things, we are set up for failure and will not be able to clearly share the message of eternal life.

Why Should We Confess Jesus as Lord and Call on Him?

In Rom 10:9, Paul wrote, “If you confess with your mouth the Lord Jesus and believe in your heart that God has raised Him from the dead, you will be saved.” Does this mean that our eternal salvation depends on confessing Christ?

The purpose of Romans was to tell the believers in Rome how they could obtain deliverance from sin and the discipline that results from our sin. Thus, the salvation mentioned in Rom 10:9 is not from the lake of fire, but rather deliverance from sin, and thus from its temporal consequences. How does Paul say we can be delivered from sin and avoid the necessary discipline that follows? By confessing Jesus as Lord. In other words, by submitting to His Lordship.

knowing this, that our old man was crucified with him, that the body of sin might be done away with, so that we would no longer be in bondage to sin…Also, do not present your members to sin as instruments of unrighteousness, but present yourselves to God, as alive from the dead, and your members as instruments of righteousness to God (Rom 6:6, 13).

When we are yielded to Christ, and abiding in Him, we are much more likely to see sin for what it is and use the power that God has given us as believers to overcome it.

When we sin, confession still has the same purposes it had in the OT:

if my people, who are called by my name, will humble themselves, pray, seek my face, and turn from their wicked ways; then I will hear from heaven, will forgive their sin, and will heal their land (2 Chron 7:14).

I acknowledged my sin to you. I didn’t hide my iniquity. I said, I will confess my transgressions to Yahweh, and you forgave the iniquity of my sin (Ps 32:5).

He who conceals his sins doesn’t prosper, but whoever confesses and renounces them finds mercy (Prov 28:13).

In Psalm 80 we see Asaph calling upon the Lord so that they (the nation) might be saved.

These passages indicate that if we confess our sins we will be forgiven. In addition, if we repent, turn from our sins, or forsake them, God is merciful and—like the Israelites and the Ninevites—we may be able to avoid the temporal judgment or discipline that necessarily follows sin.

However, as we see from David, repentance doesn’t always remove the consequences of our choices (e.g., 2 Samuel 22).

In conclusion, all people sin, both believers and unbelievers. Yet they may be able to avoid the temporal consequences and/or discipline that results from that sin if they repent. Whether those consequences are avoided or not, we know that if “we confess our sins, he is faithful and righteous to forgive us the sins, and to cleanse us from all unrighteousness” (1 John 1:9).

Finally, confession of our sins also plays an important role in our spiritual growth, and failure to do so hinders our walk with God.

Another Purpose for Confession

So what about Matt 10:32? “Everyone therefore who confesses me before men, him I will also confess before my Father who is in heaven.” Again, context is key.

Both here and in the passage below, Jesus is talking to his disciples. Jesus goes on to say that “He who loves father or mother more than me is not worthy of me; and he who loves son or daughter more than me isn’t worthy of me” (Matt 10:37). Worthy can also be translated as one who has merited anything worthy. In other words, this passage isn’t speaking of eternal life because there is nothing we can do to merit eternal life. So what is this passage talking about?

The answer appears in v 42, “… most certainly I tell you he will in no way lose his reward.”

It is unclear whether the person here shall be denied because of his actions or whether Jesus is actually denying them.

This passage is also followed by the discussion of rewards and the contrast of temporal comfort as opposed to eternal comfort. Later in the chapter Jesus states, “So is he who lays up treasure for himself, and is not rich toward God” (Luke 12:21), and “Sell that which you have, and give gifts to the needy. Make for yourselves purses which don’t grow old, a treasure in the heavens that doesn’t fail, where no thief approaches, neither moth destroys” (Luke 12:33).

These passages are addressing believers and their call to put their faith into practice. All believers are called to live lives worthy of God. In Luke 12:8-9, Jesus is not denying them in the sense of casting them into the lake of fire. Rather, He’s refusing to recommend them to the Father for eternal rewards. They are being denied Jesus’ commendation and the “well done, good and faithful servant.”

If a denial of Christ determined our eternal destiny, that would either add a condition to have eternal life, or it would mean that eternal life is not eternal.

Confession Is Not Required for Salvation

The word translated confess (homologeo) is used only four times in the Gospel of John.

The first is in John 1:20 where John the Baptist confesses that he is not the Christ. The second is in John 9:22, which states that “the Jews had already agreed that if any man would confess him as Christ, he would be put out of the synagogue.” The last instance is in John 12:42, which states, “Nevertheless even many of the rulers believed in him, but because of the Pharisees they didn’t confess it, so that they wouldn’t be put out of the synagogue.”

The point is, John never includes confessing Christ as a condition for obtaining eternal life. If confession were necessary to have eternal life, it would be a huge error on John’s part to leave it out when the purpose of his book is that its readers may believe and obtain eternal life.

Furthermore, not only does John not mention it in the context of having eternal life, but in John 12:42, he explicitly states that among the chief rulers many believed, but did not confess Christ.

“But there are some of you who don’t believe. For Jesus knew from the beginning who they were who didn’t believe, and who it was who would betray him” (John 6:64).

There are only two categories of people in John: those who believe and those who do not. “He who believes in him is not judged. He who doesn’t believe has been judged already” (John 3:18).

Since all Scripture is inspired, it is reasonable to assume that if the passage says they believed we can take it at face value.

Since one who believes has eternal life, and there were some who believed but did not confess, it logically follows that confession is not necessary for obtaining eternal life.

Since Rom 10:9 is about temporal salvation, using it to present the message of eternal life is a misuse of the passage.

Everlasting Life Is Just What It Says—Everlasting

Where Does Our Assurance Come From?

As a believer, we are going to be tempted, and our faith is going to be tested (Jas 1:2-8). However, because we are eternally secure, when times of failure or doubt arise we can rest on God’s Word and His unchangeable character.

In 1 Cor 9:27 Paul wrote, “but I beat my body and bring it into submission, lest by any means, after I have preached to others, I myself should be rejected [or disqualified, disapproved].” He also confessed he did not do what he wanted, but he did what he hated (Rom 7:15). In addition, he refers to himself as the “chief of sinners” (1 Tim 1:15). In other words, Paul struggled with doing what he knew he should be doing and he was concerned about being rejected. Am I any better than Paul?

The point is, if we look to ourselves, our lives, or our works to be sure of our eternal destiny we will always fall short. If that is the case, if we shouldn’t look to our works for assurance, what should we look to?

We can look to God’s Word. We can look to the Father and Son’s promise of eternal life to all who believe on the name of the Son. What Jesus promised is true. If you believe in Him for eternal life, you have it, present tense (John 3:16). You have passed from death to life and will not come into judgment (John 5:24). By finding our assurance in God’s Word, it frees us from any doubts so that we may continue to believe on the name of the Son of God.

Why Does This All Matter?

I have a very close family member who went through a long period in which they were convinced that they could not be a believer because they had no desire to grow in the Lord or do what they ought to be doing.

When we look at ourselves we will only see our shortcomings. However, if we know the truth about eternal life and its security, we can be free from any doubts that arise from our failures. When we understand our security in Christ and who we are, it frees us to serve Him (Gal 2:20-21). We are no longer faced with the struggle Paul describes (Romans 7). When we fail, instead of doubting our salvation in Christ, we know what to do to restore our fellowship with God. When our sins are forgiven it allows us to love Him much (Luke 7:47). Instead of focusing on keeping God’s commands we can focus on loving Him, which in turn frees us to keep them (John 14:25).

Leilani Matlack lives in Benbrook, TX with her husband Rob and home schools their four children. She is a graduate of Oak Brook College of Law.