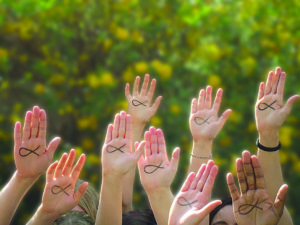 The word homologeō, often translated confess, is found quite regularly (23 times in the Majority Text) in the New Testament, but it may be surprising in what sense it is used most often.

We are accustomed to thinking of confession in relation to confessing sins. But surprisingly confession of sins is mentioned only three times in the New Testament (Matt 3:6; Mark 1:5; 1 John 1:9).

In addition to the verb homologeō, there is also the related verb exomologeō, (11 uses) and the noun homologia (6 uses). Though it is very imposing to contemplate, I personally will give a confession of my life before Jesus at the Judgment Seat of Christ (Rom 14:10-12). And even more astonishing is the fact that Jesus Himself promises that He will confess (or acknowledge) some believers before God the Father and His angels. For example,

Similarly in Rev 3:5 the Lord Jesus promises, “I will confess his name [i.e., the name of him who overcomes] before My Father and before His angels.”

Also, it is clear that not all believers will be confessed (openly acknowledged and praised) by Jesus, for He also says “whoever denies Me before men, him I will also deny before My Father who is in heaven” (Matt 10:33; 2 Tim 2:12b). In fact, the context in Matthew and also Revelation strongly suggests that those whom Jesus denies at the Bema will not be eligible to rule with Him.

Sadly confessing Christ is exactly what many believers in Jesus’ day were unwilling to do:

Nevertheless even among the rulers many believed in Him, but because of the Pharisees they did not confess Him, lest they should be put out of the synagogue (John 12:42, emphasis added).2

For me, I have decided that I want to be a confessing believer that I might be confessed at the Bema.

1. Whether it should be translated that way so often is open to question. Possibly translations like acknowledge, profess, praise, or declare might better convey the sense in some contexts.