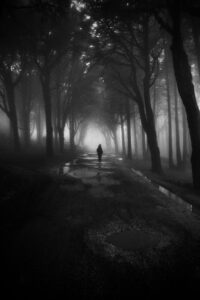 A reader recently claimed that it would be wrong for God to force a Christian-turned-atheist into heaven because it would violate his or her free will. This raises an interesting question. This is my response to that claim.

If someone has believed in Jesus for salvation, then these verses apply to him even if he no longer believes.

Jesus said, “I give eternal life to them, and they will never perish, and no one will snatch them out of My hand” (John 10:28). He said never perish.

He also said, “The one who comes to Me I will by no means cast out… This is the will of the Father who sent Me, that of all He has given Me I should lose nothing, but should raise it up at the last day.” (John 6:37b, 39). Once anyone believes in Jesus (=comes to Him), he is included in what is not lost and what is not cast out.

The Lord Jesus said, “Very truly I tell you, whoever hears my word and believes him who sent me has eternal life and will not be judged but has crossed over from death to life” (John 5:24).

The believer has passed from death to life. A believer cannot commit spiritual suicide. It’s not in the ability of a man of flesh to kill that which is spiritually alive.

Jesus replied, “Very truly I tell you, no one can see the kingdom of God unless he is born again” (John 3:3).” Can you become unborn once you’re born? Nope. It’s a one-time event.

If you claim that you can lose salvation by becoming an atheist, then you don’t believe in what Jesus promised, everlasting life that cannot be lost. That’s because you don’t really know if you’ll become an atheist before you die. You might. So, you can’t be sure if you’re saved (with the logic that you presented). Nonetheless, John said, “I have written these things to you who believe in the name of the Son of God, so that you may know that you have eternal life” (1 John 5:13).

The bottom line for me is this. I care about the simple promise of Jesus. Jesus promised eternal life for all those who believe in Him. He promised that we get that eternal life now, not later: “Truly, truly, I say to you, he who believes in Me has eternal life” (John 6:47).

Notice that the person who believes has eternal life now. So how long does eternal life last? If it doesn’t last forever, then Jesus lied. You get everlasting life the moment you believe, and it lasts forever. That’s a promise of Jesus, and I believe it. Do you?

Lucas Kitchen is an American author of both Christian fiction and nonfiction, and the Director of Free Grace International. He lives in Longview, TX, with his wife and three kids.