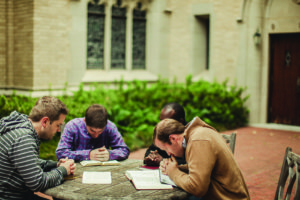 The Believers Pray for Boldness

After Peter and John exhibit boldness before the Sanhedrin (vv 19-20), they are found in prayer (vv 24-30). There is no bragging about how they stood up to the Sanhedrin, for they realize it is God who grants boldness (v 29; cf. Elijah in 1 Kgs 17:1). Peter had once fancied himself bold and did not pray in Gethsemane. He does not make this mistake here. For boldness arises, not from human personality or purpose of heart or will, but from prayer.

4:23. Note the phrase their own company (which can refer to relatives, cf. 1 Tim 5:8). The phrase is very personal. Up to now, it is not used in Acts. No doubt the hostility they had faced deepened (as it often does) their sense of “belonging” to the Christian company. It is their own as to spiritual race and as to spiritual family. It is just possible the phrase their own company may refer to the apostolic circle itself, rather than the whole Church. However, even if so, the principles stated below are still valid.

4:24a. With one mind, expressing the unity which they have with their own company, and all with one another, in prayer. Thus the oneness and kinship and spiritual agreement of the believers are here stressed in prelude to their prayer. The unity of believers is a key to effectual prayer (cf. Matt 18:19). Note, however, that Jesus seeks not agreement as to what to ask merely, but “as touching [peri] anything that they shall ask…” This reaches down also to agreement of desire and motive in asking, and it involves the working of the Spirit.

4:24b-30. Three great matters upon which they found “one accord,” spiritual agreement, and which also are three great keys to effectual prayer:

First, they were of one accord regarding the Person of God (v 24). He is viewed in His greatness. The magnificence of their vision of Him dwarfs their problem. Threatened by rulers of earth, they turn to the heavenly Despot (Despota), Who is also the Creator of the world.

Second, they were of one accord regarding the Word of God (vv 25-28). Psalm 2 is used though its final fulfillment awaits a future day. Yet they understand it well enough to see its relevance to them. They discern a preliminary fulfillment (vv 27-28). They do not say it has been fulfilled. The persecution they experienced exhibited the same spirit of rebellion against the Lord and Christ that will be evident in the final phase of the rebellion under the Beast.

Moreover, the Psalm gives direction to their request through its revelation of the response of God (cf. Ps 2:4). If God laughs at this spirit of rebellion, it would be inappropriate for His people and witnesses to fear or to lose the manifestation of His power among them. So they pray for boldness and the working of God’s power (vv 29-30).

Few today could have been so guided in prayer by such a Scripture. Knowledge of God’s Word, its relevance to our situation, its implications for our prayer, is essential to a fruitful prayer life (cf. John 15:7). His words must abide in us.

Third, they were of one accord regarding the will of God (vv 29-30). They do not ask God to set aside the threats, or save them from prison and death. They ask that they might glorify Him by being unafraid. Indeed they prayed for the very thing—boldness—which resulted in Stephen’s death and the first persecution. We often ask to escape our problems, rather than to glorify God in them (cf. Phil 1:19-20).

They Were All Filled

4:31. If, in v 31, the believers were all filled with the Spirit, that means prior to their prayer they had not been full, for you cannot fill what is already full.

Note that in Acts 2:4 they were all filled. And in Acts 4:8, Peter is filled. Hence, at least in Peter’s case, we have three separate instances of his being filled (Acts 2:4; 4:8; 4:31). But there is no record that Peter and John were filled as they preached in Solomon’s porch (Acts 3:12ff). God can bless even when this does not occur (e.g., the results at Solomon’s porch, Acts 4:4). Apparently the filling of the Spirit is a sovereign act of the Spirit. Also note that the Christians prayed simply for boldness, but God chose to fill them. There is no recorded prayer for the Spirit’s filling. As previously mentioned in these notes (cf. Acts 2), in Luke-Acts the filling of the Spirit seems virtually equal to divine inspiration. The Spirit takes full control.

The Spirit is a Person. He is not an influence or force to be automatically controlled when all the “spiritual switches” are thrown. Thus He Himself decides when and where to fill men. But the vessel must be prepared.

These Christians were prepared by the desire to witness, being saturated with God’s Word (vv 25-27), and, of course, prayer, not specifically prayer for filling, but certainly for a condition of readiness to speak that is conducive to filling.

“The place where they assembled together was shaken.” God did not surely shake the place: (a) to prove He can shake a house, for He can shake creation (Job 9:6; Heb 12:26-28); or (b) to give some needed accompaniment to the filling of the Spirit, since nothing was shaken in Acts 2:1-4; or (c) to prove they had been filled (no externals at all are really necessary; cf. Acts 4:8).

Surely He shook the house as a visual lesson of what He desired to do spiritually.

The place where they were assembled together was some sort of building. This building was physically shaken, while Jerusalem as a whole was spiritually shaken, (cf. Acts 17:6).

Had they heeded the Sanhedrin, Satan (who was behind it) would have stifled the growth of the Church before it ever touched Judea and Samaria and the uttermost parts of the earth. The Church would have died in Jerusalem (thus do all churches which do not witness). The Satanic attack was defeated by their believing prayer. God had yet a world to shake.

We, too, can be used to shake the place where we are assembled, if God can indeed “inspire” all of us with His Spirit and if all speak His Word with boldness. 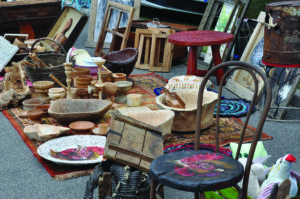 Holding All Things in Common

It was as if a single heart throbbed in this vast multitude, as if a single soul animated it. The miracle of it is seen in that it embraced the multitude of those who believed. The effects reached all.

But unity of heart and soul was not merely a “sweet” idea, it had a practical outworking in community of possessions. They had all things in common. Possessions are a good test of our love and oneness with the brethren (cf. 1 John 3:17). Such community of goods would still be possible today if all had the prerequisite oneness of heart and soul. Just one person claiming his own, or taking advantage of others could spoil it (e.g., Ananias and Sapphira).

4:33. Following v 32, would suggest that the apostolic power bore a relationship to what precedes. Since the members of the body depend one on another, and the health of all is affected by the health of any, it follows that a healthy, spiritual Christian fellowship will enhance the effectiveness of the more prominent members of the body whose responsibility is public.

And their power in testimony is beneficial to all, for next we read: And great grace was upon them all. The interdependence of the Body is thus shown.

4:34-35. These verses spell out one aspect of the great grace that was upon them all. Christian grace is sacrificial for the needs of others (cf. 2 Cor 8:9). Note that “needs” not “wants” were met. The Apostles administered. Those who were rich here became poor for the needs of the brethren. If the cross means anything, it points to sacrifice. We take up ours to follow Him. This is genuine Christianity.

When Christianity lacks either unity, power, or love (sacrifice) by so much, it is a distortion of genuine Christian experience in the Church.

Note that the blessings of vv 32-35 (and not only of v 31) follow the prayer of vv 24-30. Prayer is ever the secret of the Church’s blessing. Though they had asked only for boldness, they got far more (Eph 3:20). God gave them not only the boldness they asked, but the Christian love which alone could support that boldness and make it productive of faith in others (cf. John 13:35). Prayer is worthwhile for it obtains often more than it asks; for God knows what really we need, even to make a correct request fully worthwhile.

4:36-37. Barnabus is here a typical example of what the Church was producing in men. He seems to have been a special encouragement to the Apostles who gave him this name, perhaps because as a Levite, as well as a man of some wealth, his subjection to the faith was uplifting against the background of rejection on the part of the Temple officialdom, those in charge of Jewish worship. Here was one Levite at least who came to Christ.

Barnabus’ career of service begins by his being an encouragementto the Church. There is little hope for future usefulness of those who are not encouragements in the assembly. We need more Barnabuses, more “sons of consolation (encouragement)” and fewer “sons of discouragement.”