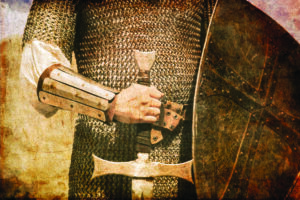 In 2001, the United States Army began using the motto an “Army of One.” It replaced the popular slogan, “Be all you can be,” which ran for over 20 years. By contrast, “Army of One” only lasted five years. Critics of the motto made an insightful observation: an “Army of One” goes against the very essence of the military, which fundamentally functions on teamwork.

Many Christians study the Scriptures with an “Army of One” mindset. We look at verses that deal with the church and individualize them. An example of this can be found in Eph 6:10-18, famously known as the armor of God passage.

In the Lord’s Army

Growing up an Army brat, I have many memories of that passage being taught. In Sunday school we sang “I’m in the Lord’s Army” while memorizing all the pieces of armor. All the kids would make their foam helmets of salvation and construction paper shields of faith and gleefully wear them home feeling just like Dad in his BDU’s (military uniform). The pieces of armor were individualized for each kid.

Even as adults, people come to these verses and think they describe the individual believer dressed in armor. Perhaps you see yourself standing on the battlefield. You are a lone warrior, with the
gold from your breastplate glistening in the sun.

You wield the sword of the Spirit above your head.

However, these verses can be overwhelming if taken individualistically, and that armor’s weight is seemingly crushing. That’s a lot of responsibility for the lone soldier to carry. And it is hard to fight a battle as a single soldier.

I want to suggest that an individualistic interpretation forgets a key element of this passage.

Which Body Wears the Armor?

The Book of Ephesians deals with the unveiling of the mystery of the Church (3:1-6), where both Jews and Gentiles have come together to form something new, i.e., the Body of Christ.

In other words, this book is not about me, the individual, but about the members of the “Army of God” joining together, serving, and submitting to one another. This corporate theme runs throughout the book.

In Ephesians 1, Paul tells us that Christ is the head over all things in the Church, which is His body (1:22-23). In Ephesians 2, we are told that the two (Jews and Gentiles) have been brought together to create the new man. This “new man” is the Church (2:14-16). Paul reveals the “mystery” of the Church in Eph 3:1-8. Then, beginning in Ephesians 4, he unpacks how the Body of Christ should be unified (4:1-6), giving special attention to spiritual gifts (4:7ff). Then, in Ephesians 5, he deals with how we are to submit to one another (5:21ff).

This is the backdrop to Eph 6:10-18. Rather than seeing these verses as a call to be an army of one, Paul is calling in the troops.

If I could summarize Paul’s point: The armor of God is about equipping the church to function as a healthy team when facing spiritual enemies.

Notice that in v 12, we are not fighting a single demon or force, but a plurality of “principalities,” “powers,” “rulers” and “hosts.” That’s an intimidating opponent to be against, and if I take this passage as a battle between them and me, the odds are not in my favor.

However, if I consider the corporate theme of the book, with the church working as a unit, I find this far more encouraging.

Bring in the reinforcements!

The Footwear of God

Let’s take one piece of the armor and apply it with this corporate emphasis. In v 15, Paul talks about the footwear of the church saying: “and having shod your feet with the preparation of the gospel of peace.”

What is this gospel?

If you view this verse as referring to the individual, you might think this verse is talking about how we each should be bold witnesses to the unbelieving world. You have a responsibility to go out and share the gospel of eternal life by faith alone in Christ. Individual believers are supposed to share with the unbelievers that they can have “peace” with God when they believe in Jesus for the gift of eternal life.

While that is true, that is not Paul’s point in this verse. Evangelism is a foreign concept to this passage. It would be a huge change in subject regarding the overall discussion.

There are two words in the term “the gospel of peace” that are worth closer study.

The word gospel simply means “good news,” and can refer to many different things in the Bible. The question we need to ask is which piece of good news does Paul have in mind in the book of Ephesians?

Just a few verses later, Paul uses the word a second time, saying that he has boldly taught the “mystery of the gospel” (v 19). Which gospel is that? Bob Wilkin makes this comment regarding this verse:

The gospel is clearly in the Old Testament. The death of Jesus is spoken of in Psalm 22 and Isaiah 53, as well as in Genesis 22 via typology when Abraham offered up his only begotten son, Isaac. The resurrection of Jesus is also prophesied in the Old Testament (cf. Ps 16:9-11). So, what is this mystery? Is this not the mystery of the church, Jews and Gentiles together in one body? Indeed, it is. That is the good news Paul has in mind here. The church was a mystery in the Old Testament (Wilkin, The Ten Most Misunderstood Words in the Bible, p. 143).

The mystery of the gospel is the good news about the church. That makes sense in light of Eph 3:1-9, where Paul discusses the “mystery” that is the church.

That this gospel is good news about the church also makes sense when we consider the next word, peace. What kind of peace does Paul have in mind?

First, in v 14, he talks about how, having broken down the middle wall of separation, Christ is “our peace.” Paul is speaking about the relationship between the Jews and Gentiles and the wall that kept them separated from each other in the temple. In Christ, that wall was destroyed, and the Gentiles now can have peace with the Jews.

Second, in v 15, Paul talks about how the Law was abolished through Christ, making “peace” where there was once enmity between the two groups.

Third, in v 17, he talks about how the Gentiles who were afar off were preached “peace.” What is this good news of peace that they heard? It’s the peace Paul has been discussing in the previous verses, that Jews and Gentiles are equals in the Body of Christ. The whole passage deals with the peace between Jews and Gentiles. Significantly, this is not peace between mankind and God, but between two opposing groups. The Law separated the Jews from the Gentiles, but now through Christ, we are equals in the body of Christ and should pursue peace with one another (Rom 14:19).

Fourth, in chap. 4, Paul gives a summary statement for the whole book. He describes the unity of the church. He talks about how there is one body, one Spirit, and one faith (vv 4-6). Leading into these verses, Paul encourages the readers to endeavor “to keep the unity of the Spirit in the bond of peace.”

We see a common theme in all these passages. The main point is that the church, especially these Jewish and Gentile readers, is to be unified with one another. In fact, this is such an important issue to Paul, it is one of the last things he says to the church at Ephesus.

Notice how Paul ends his letter saying: “Peace to the brethren, and love with faith, from God the Father and the Lord Jesus Christ” (Eph 6:23, emphasis added).

When we put these terms together in 6:15, the message is clear—“The gospel of peace” is not about evangelizing to the unbelieving world, but refers to the good news of the church, which has brought peace between Jews and Gentiles. That’s an encouraging message. Regardless of our background, nationality, gender, or status, we can have peace with one another in the Body of Christ. When unified, we can withstand the evil of the day.

It is no secret that we are living in dark times. We are increasingly seeing church attendance fall, undoubtedly exacerbated by the last year of quarantines, lockdowns, and an upsurge of people working from home.

While this makes things harder, the truth of the Scriptures is clear. We were made to function as a body.

The Christian life is not meant to be lived in isolation. You are not meant to fight this battle alone. Individually, you are not an “Army of One.” However, the Body is one, and for that we should praise the Lord (Eph 3:21).

Kathryn Wright is a missionary and coordinates overseas speaking and teaching for GES.