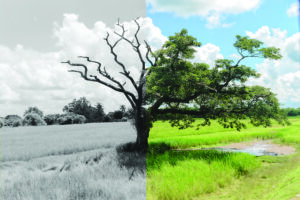 There are two kinds of miracles in the Bible. Blessings and cursings. Everyone wants the one, while avoiding the other like the plague…because, well, the other is literally the plague.

Blessing miracles are constructive events like healing, restoring sight, or bringing someone back from the dead. These are the ones that make it into the Sunday school curriculum. Remember when Elijah resurrected the widow’s son? Good example. Very constructive! There are lots of those in the OT, but if you think of miracles as only constructive, then you’re missing an entire facet of God’s supernatural input into the world.

Don’t forget the cursing miracles. If Darth Vader were leading a Bible study, I suspect he’d have a particular interest in these. Cursings are destructive miracles, like bringing blindness, inflicting disease, or cutting someone’s life short. Don’t make the mistake of thinking that cursing miracles are evil or wrong. They may include destruction, illness, and death, but they come from God. Remember Samson bringing down the temple on thousands of Philistines? Pretty deadly and destructive, right? Still, God gave him the power to do it. The OT is packed with both blessing and cursing miracles.

The OT predicted that when the Messiah comes, He would do both kinds of miracles, blessings and cursings. He would grant the blessing of supernatural long life and health to his faithful ones (Isa 65:20), and miraculously curse with plague and famine those who oppose Him (Zech 14:16-17). The OT prophesied a Messiah who would employ the full spectrum of miraculous options.

Everyone seems familiar with the blessing miracles in the NT, like feeding a not-socially-distanced crowd of thousands, healing people of awful ailments, even making booze so the party could go way past midnight. However, the NT has its fair share of cursing miracles as well. Remember Paul being blinded? That’s pretty destructive. Apparently, blindness was a favorite because Elymas the sorcerer got hit with a sudden case too. Maybe the biggest was Ananias and Sapphira, who dropped stone-cold dead at the feet of one of the apostles? (Acts 5:1-11). Cursing miracles are not just an OT thing.

NO CURSES FROM JESUS

It’s the Gospels. Jesus didn’t use cursing miracles. During His time on earth, He didn’t make anyone blind, inflict a disease, or miraculously end anyone’s life. The prophets before Him and the apostles after Him would both engage in these kinds of miracles, but Jesus didn’t during His earthly ministry.

Why didn’t Jesus curse anyone? He had the ability,1 but didn’t use it. Why? If it were me—well, we’d all be in trouble if it were me—but if it were me, I know whom I’d use the curses on. The Pharisees were a royal nuisance, with their unbelief and super-duper-uber-legalistic-self-important-pride and weird hats. I don’t know if they really wore weird hats, but they always have those five-gallon-bucket-looking hats on in the Jesus movies. Drives me nuts.

Anyway. They opposed Jesus at every turn. They resisted Him. They refused to believe. It would have been easier just to wave His hand. Poof! “And…ya blind.” Or, boom! “Now you got bunions. Boils for you. Bubonic for the whole back row. Should have sat up front.” It would have proved He was in charge, and it would have made people line up for miles to obey Him. And yet, He didn’t use cursing miracles.

His disciples expected Him to, and seemed confused that He wasn’t blasting anyone with the holy water cannon. Remember that time when a Samaritan village rejected Jesus because He was heading to Jerusalem? James and John pulled Jesus aside and said, “Lord, do you want us to call fire down from heaven to destroy them?” Obviously, Jesus didn’t agree to make the village a smoldering ruin. Instead, He rebuked His own disciples for suggesting that He use a cursing miracle to turn the Samaritan village into flaming rubble. Even His disciples expected Him to use destructive miracles, but He didn’t do it.

Think about how different the Sermon on the Mount would be if He were open to the option of cursing miracles. “I tell you, if you look at a woman with lust in your heart, I’ll give you heartburn so bad you’ll be breathing fire, and I’ll delay the invention of antacid for another two thousand years.” Imagine how people would have obeyed if they knew He would bring down a miraculous case of halitosis, nose bleeds, or hemorrhoids. No one would play the lightning round with Jesus, and everyone would sit on the bench at the mention of sudden death.

He could have used miraculous curses; you know He could have. So I’ll repeat my question. Why did He only use blessing miracles? Why didn’t Jesus curse anyone?

I think John 5:40 has a hint. Do you remember it? He says to a group of know-it-all-unbeliever-Pharisees, “you refuse to come to Me to have life.” It was the perfect time to call down a heavenly hernia upon them all, but He didn’t. Instead, He allowed them to refuse His offer of free eternal life. He could have cowed them into submission, frightened them into belief, and sent them quaking into the gates of heaven, but He resisted the urge.

Why? I think it’s because He wanted people to be able to resist His offer if they so chose. He gave people enough evidence to believe, but not so much they were coerced or obligated to enter the Kingdom against their will. Essentially, He didn’t use cursing miracles because He wanted to leave everyone’s free will intact.

It says something about God and Jesus’ character that He revealed enough of His glory to bring open-minded people into the fold, while veiling His wrath enough so those who wanted to resist Him could continue to do so. He came to offer, not occupy; to appeal, not appropriate; to invite, not inflict. That gentle, dignity-preserving invitation was extended to the people of the time, and it
brought a certain kind of person in. Many openminded listeners believed in Him and received everlasting life.

Many more took advantage of the free-will privilege He gave them and refused to believe. Jesus’ gentle approach sent another kind of person away searching for the next militant revolutionary, battle-beating warlord or the power-wielding dictator. Basically, they would have voted for Darth Vader; at least that dude knew how to force choke. Jesus didn’t provide enough plagues or pestilence for the power-hungry Pharisees’ taste. Their own evil motives made them miss the God of the universe, because He came to them meekly.

NO DESIRE TO OVERWHELM

Sometimes I have unbelievers ask, “Why doesn’t Jesus just show up and prove once-and-for-all that He’s real?” I think it’s because the kind of overwhelming “proof” an obstinate unbeliever would need might just override his free will. It might just remove his eternal prerogative to refuse belief. Or it might just make him pee his pants. Most of the time, these unbelievers suggest Jesus should do some blessing miracle as proof. I’ve never heard unbelievers say, “If Jesus would just strike me with macular degeneration, relentless malaria, and a violent case of dysentery, then I’d finally believe.” No, they want the blessings, and the curses never cross their mind. Although, for God, He’s got both options, even if He doesn’t always use them.

Even in Jesus’ day, people would see Him do a miracle and then a moment later ask, “What sign will you give to show you’re really the guy?” (my paraphrase). I think what they were asking was, “When are you going to do some serious damage on our enemies?” Even after His resurrection, the apostles were asking something kind of similar when they said, “Lord, are you at this time going to restore the kingdom to Israel?” They wanted to know when He was going to start the fireworks. Jesus, when are you going to start dropping the H bombs on the Romans?

They weren’t exactly wrong to ask. Their timing was a little off. Of course, there will be a day when Jesus returns, blood-covered, on a warhorse, with a sword. Those Messiah-powered cursing miracles the OT forecast will arrive when He shows up for seconds.

As for now, He is holding the door open, inviting as many to come in as they will, before He shifts into a battle strategy after the Rapture. The thing is, He could show up at any time with that new strategy in play. He told His disciples, “It’s not for you to know the times or dates.” He’s held off this long, but we really don’t know for how much longer.

As far as His first coming, He could have miracle-cursed us until we were so gun-flustered that we said, “Ok, we’ll believe whatever you want us to; just quit it with all this athlete’s foot stuff.” I’m joking around because it’s really frightening to think about what He could have done. It’s awe-inspiring to realize that despite His immeasurable power to melt our flesh from our bones, (yes that’s actually in the Bible), He chose to thaw our hearts with a gentle display of blessing miracles.

It’s a sign that He loves you, and it’s incredible.

Lucas Kitchen is a Christian author and filmmaker. Check out his work with Free Grace International (https://freegrace.in).

1. There was that time He cursed the fig tree, which proves He had some serious cursing power, but chose not to use it on the people He came to offer salvation to (Matt 21:19-20).