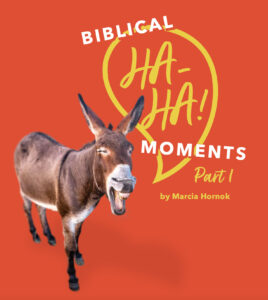 At a Bible study early in our ministry, my husband, Ken, asked our group what Bible person we would most like to be. I said, “Eve, when Adam woke up.” We like to think about Scripture’s real-life events, where people expressed the emotions we know—from despair to ecstasy, from weeping1 to belly-laughing. Of all God’s creatures, only those who bear His image engage in humor. God’s image includes laughter.

Psalm 2:4 says God laughs (derisively) at the way mere mortals exalt themselves against Him. Psalm 37:12-13 and 59:7-8 reiterate God laughing at the self-importance of the wicked. Similarly, Elijah ridiculed the prophets of Baal to showcase their folly. He implied that their god could not hear them. “Perhaps he is daydreaming, or is relieving himself, or he is on a journey. Perhaps he is sleeping and must be awakened!” (1 Kgs 18:27 NLT.)

For 40 days, morning and evening, Goliath mocked the armies of Israel. King Saul and his soldiers ignored their secret weapon, “the living God.” But young David took up his sling to go against the nine-foot-tall giant, clad in a bronze helmet, wearing a coat of mail on his chest and legs, carrying a javelin and spear, and preceded by a shield-bearer.

When David’s stone struck the giant’s forehead, he should have fallen backward. Oh no, David had told Goliath, “The Lord does not save with sword and spear, for the battle is the Lord’s.” God made him fall facedown (1 Sam 17:49).

Psalm 115:4-8 and 135:15-18 poke fun at idols that cannot speak, see, hear, etc., saying those who make them become like them. Jeremiah goes further, chiding the people for carefully crafting a graven image that had to be carried about and fastened down so it would not totter. He compared it to a scarecrow in a cucumber patch—it could do neither harm nor good (Jer 10:1-5 NASB).2

Isaiah mocked idolaters by saying, “The person who made the idol never stops to reflect, ‘Why, it’s just a block of wood! I burned half of it for heat and used it to bake my bread and roast my meat. How can the rest of it be a god? Should I bow down to worship a piece of wood?’” (Isa 44:19 NLT).

Gideon might have thought the Angel of the Lord was being sarcastic when he addressed Gideon as a “mighty man of valor” (Judg 6:12). There he was threshing wheat in a wine press. Say what? How could the wind blow away the chaff? Turns out Gideon was hiding in fear from the Midianites. Nevertheless, the Angel’s words did become true.

In John 9, Jesus healed a blind man—something the Hebrew Scriptures said Messiah would do—but it happened on the Sabbath. Messiah would not violate Sabbath, would He? The Jewish religious leaders questioned the healed man and his parents. Repeatedly. I imagine his sarcasm when he asked them if they wanted to become Jesus’ disciples too (John 9:27). Then he, who had never learned to read, schooled the religious scholars in theology—asserting that only God can heal blindness. The result was they expelled him from the temple, even though that had been the first day of his life he was qualified to be there.

Sarcasm appears again in Galatians, where Paul poses the question of how those freed by the promise of God could want to be under legalism again. “Who has bewitched you?” (3:1). The double entendre in 5:12 is unmistakable: “I could wish that those who trouble you [about circumcision] would even cut themselves off” (implying castration)! This was a sarcastic but dramatic way of saying they should stop bothering the Galatians. The only law God imposes is the Law of Love, which the Galatians lacked: if they kept biting and devouring one another, they would become spiritual cannibals (5:15).3

My favorite Biblical humor involves the Laugh-Out-Loud events. A donkey says to Balaam, “Why are you beating me? Have I ever mistreated you like that?” (Num 22:28-30). The beast could see the Angel of the Lord, but the prophet of God could not. Although Balak had hired Balaam to curse Israel, he kept uttering blessings until Balak told him, “Neither curse them at all, nor bless them at all!” (Num 23:25).

The Philistines of Ashdod thought they were clever for capturing what they supposed was Israel’s god. They placed the Ark of the Lord in the house with their idol, Dagon, perhaps as a gift for Dagon. The next morning they found their god fallen on its face before the Ark of the Lord. They set the idol back up, and Dagon again bowed down to the Ark, only this time with its head and hands broken off (1 Sam 5:1-5). Divine Show-and-Tell.

I cannot resist a modern-day parallel. On March 18, 2020, a small earthquake hit the Salt Lake City area. A statue of the Latter-Day-Saint angel, Moroni, sits atop the main temple in downtown SLC. The statue held a trumpet to its mouth, symbolizing the spread of the Mormon “gospel.” The earthquake made Moroni’s trumpet fall right out of his hands!

Back to the Ashdodites. They recognized that the God of Israel’s “hand was heavy on them,” so they sent the Ark to their neighbors—Gath and Ekron. God’s judgment followed the traveling Ark in the form of tumors (hemorrhoids?) and rodents (1 Sam 6). Thanks for nothing!

When King Saul and 3,000 of his best warriors were pursuing David and his band of misfits (1 Sam 24), Saul entered a cave to relieve himself. David was hiding in the back of that very cave. While Saul was thus engaged, David stealthily cut off a corner of Saul’s robe. When Saul “got up from the cave and went on his way,” David came out of the cave after him and called out, “My lord the king,” and held up the missing piece of Saul’s robe. He was not showing the joke he had played; he was proving his own innocence by sparing Saul’s life. It did appease Saul for a time.

And consider God’s preposterous military tactics. He used suspense and sound at Jericho (Josh 6:5). Light and sound against Midian (Jud 7:20-22). Battle sounds making the enemy run for their lives in 2 Kgs 7:6-7, with the abandoned camp and spoils discovered by four lepers. A wall that fell on 27,000 escaped Arameans (1 Kgs 20:29-30). The Angel of the Lord striking 185,000 Assyrians during the night. Second Kings 19:35 actually says, “When men rose early in the morning, behold, all of them were dead” (NASB).

Finally, God told Jehoshaphat not to fight the three nations coming against him. Instead they sang and praised God. The enemies thought they were being attacked by Judah and fought back. When Judah came upon them, “they were all corpses lying on the ground” (2 Chron 20:24). Hmmm…can praise songs sound like combat?

I think Elisha gives me more chuckles than any other Bible person, but I’ll save him for Part 2.

We Free Gracers have a reputation for scholarly Bible study, but we should not miss its lighter moments. We can enjoy God’s generous sense of humor. After all, He created the manatee, platypus, and hammerhead shark!

Marcia is Ken’s grateful wife, serving with him in Utah where he pastored for 39 years and they raised six children. Now they enjoy 13 grandkids. Her latest work is a guilt-free Bible study of Proverbs 31.

1 See this author’s article, “The View from Ziklag,” Grace in Focus magazine, Sept/Oct 2019.
2 Scarecrows are useless, since birds do not peck cucumbers due to the rind.
3 From The Grace New Testament Commentary, Vol. 2, Robert N. Wilkin, ed. (Denton, TX: Grace Evangelical Society), 2010, p. 848.