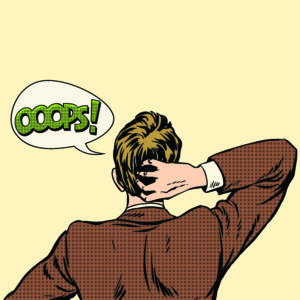 While the Bible has no bloopers, the way we visualize the written Word might. For example, when Joseph’s eleven brothers came to him, we picture Benjamin as a youth because he was the youngest. However, shortly thereafter, all seventy members of Jacob’s family moved to Egypt, and the name list includes Benjamin’s ten sons (Gen 46:21).

Another Bible story picture that may need a retake is Samson. If he had a Mr. Universe physique, the Philistines and Delilah would not have wondered about the source of his strength. Perhaps Samson had an average or even puny body build. Thus his strength was a conundrum.

And don’t get me started on the narratives about Jesus’ birth. Show me the verses that mention a donkey, an inn-keeper, a stable, or wise men worshipping at a manger.

Nor does the Bible say that the wise men followed the star from their homeland all the way to Israel. If that were true, it would have led them to Bethlehem, not Jerusalem. They did follow the star in Matt 2:9-10, but only for about six miles.

In my opinion, the greatest hotbed for bloopers shows up in Christian devotionals, which commonly take a verse or phrase and make it say something inspiring.

Writers and speakers should not start with a great application and make the Biblical text support that thought, lest bloopers result. Rather, we must observe the text in context—by asking what God was saying to the original audience. Someone has correctly observed that not all the Bible was written to us, but all the Bible was written for us. Good study results in unforced interpretation, which will then determine relevant applications.

Consider these verses we often pull out of context.

Psalm 46:10 has nothing to do with so-called “listening prayer” or God speaking to our hearts. Instead, God is telling the nations to “be still and know” that He is God. He wants them to cease striving (warring) and let Him have His way.

For I know the thoughts that I think toward you, says the Lord, thoughts of peace and not of evil, to give you a future and a hope (Jer 29:11).

In the beloved verse, Jer 29:11, what was God saying to the original audience, the Israelites in exile? We cannot personalize v 11 (that God plans to give us a future full of peace, not evil) unless we also claim v 10—that we will return to our homeland after seventy years. Yes, we are constantly on God’s mind, but a better verse for that concept is Ps 40:5.

And you He made alive, who were dead in trespasses and sins (Eph 2:1).

I’ve heard popular speakers trying to prove that regeneration precedes faith, and that even faith is a gift, not a response. Yet in Eph 2:2, that dead condition results in walking! Let Ephesians interpret Ephesians. “Dead in sins” is explained in 2:2-13 and 4:17-19. It means separated from God because of sin.

Therefore, if anyone is in Christ, he is a new creation; old things have passed away; behold, all things have become new (2 Cor 5:17).

Does 2 Cor 5:17 mean that believers will exhibit godly behaviors because they are “a new creature,” or is “a new creation” a better translation?

We answer this by observing that the theme of 2 Cor 5:14-20 is our ministry of reconciliation. Now that we are “in Christ,” we have a new perspective on all of creation. Our old way of perceiving things according to the flesh (v 16) has passed away. A new outlook has come. Thus we now discern that unbelievers need to be reconciled to God, and we are His ambassadors in that process.

That if you confess with your mouth the Lord Jesus and believe in your heart that God has raised Him from the dead, you will be saved. For with the heart one believes unto righteousness, and with the mouth confession is made unto salvation (Rom 10:9-10).

Perhaps you like to evangelize using Rom 10:9-10 to facilitate a response that people must both believe with their hearts and confess with their mouths.

While many people have no doubt believed Jesus’ promise of eternal life and trusted in Him by a misapplication of these verses, in context they concern national Israel being saved (delivered) when they call on the Lord. We must not ignore the OT quotes in Romans 10. They reveal the meaning.

Whenever the word salvation/saved appears in Scripture (eight times in Romans 9-11), always ask: “Saved from what?” (Hint: it usually does not mean from Hell.)

Also, study the phrases, “calling on the name of the Lord” and “confess” the Lord Jesus throughout Scripture to see if this is done by believers or unbelievers. (René A. Lόpez explains six views of this passage in his outstanding book, Romans Unlocked.)

I can do all things through Christ who strengthens me (Phil 4:13).

Finally, consider Phil 4:13 where doing “all things” through Christ refers to learning contentment, not running a marathon!

I am not a scholar, and many Bible passages baffle me. But I am a student who has learned to study a verse in context before offering wisdom on how it relates to us. Sometimes I look at my early published devotionals and blush at the bloopers they contain. Was I purveying God’s intended truth or my imposed concepts?

Hopefully this article will help you avoid bloopers as you study and teach the Biblical text contextually.

Marcia Hornok is Ken’s lucky wife, proud mother of six, and happy grandma of 11. Her gift book of 82 practical devotionals, Fruit of the Spirit: Inspiration for Women from Galatians 5:22-23 is out of print but available as an ebook on Amazon.