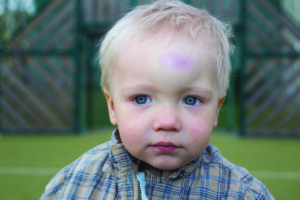 There are two standards for evaluating a logical argument. First, is it true? And second, is it valid? When an argument has true premises and is valid, you call it sound.

According to the first standard, in order for a logical argument to be true, the premises must be true. That’s common sense. I wrote an article that explained the difference between having true or false premises in assurance. Obviously, Biblical assurance must be based on true premises, not false ones (see “Assurance Made Simple”).

In this article, I want to address the second standard, i.e., the validity of the argument. To have Biblical assurance, your argument must not commit any logical fallacies. One of the biggest fallacies is called affirming the consequent.

Formally speaking, this is what the fallacy looks like:

Where Did You Get That Bump?

If you didn’t follow that, here’s an example in plain English, using my three-year-old son, Zane:

Premise 1: If Zane falls off his bed, he will have a bump on his head.

Premise 2: Zane has a bump on his head.

Do you see the problem? Do you see why that is a fallacy? Can you tell why the conclusion does not necessarily follow from the premises?

Have you ever heard the expression, “Some people get all their exercise by jumping to conclusions!” Well, that’s the essence of the fallacy of affirming the consequent. It jumps to conclusions.

The conclusion fails to consider other possibilities that might explain the second premise.

In plain English, just because Zane has a bump on his head does not mean he must have fallen out of bed.

That could be the explanation. But there are dozens of other possibilities for why he has the bump on his head (believe me, he’s tried them all!).

For example, Zane could have fallen out of a tree, or off a swing, bike, or scooter. His sister could have hit him on the head with a bat, stick, baseball, branch, rock, or book. He could have run into a door, wall, or window. Yes, it is also possible he could get a bump on the head by falling out of bed, but that is only one option among many.

That’s the fallacy of affirming the consequent.

Many people base their assurance on the same illogical reasoning. For example, they might reason this way:

Premise 2: I do good works.

Conclusion: Therefore, I am saved.

Do you see the problem?

Maybe you do good works because you’re trying to earn your salvation.

Being “saved” is only one possible explanation among many for doing good works. Hence, the conclusion does not necessarily follow from the premises. It is invalid.

Premise 1: Saved people feel a strange warming in their bosom.

Premise 2: I felt a strange warming in my bosom.

Conclusion: Therefore, I am saved.

For example, maybe you ate some ghost pepper hot sauce, or ran a marathon in Texas during the summer, or are going through menopause, or are having a mild heart attack.

Being “saved” is not the only explanation. And it is illogical to think so.

Biblical assurance must be valid. The premises must be true and it cannot commit any logical fallacies. So how should you think about it?

The simplest way is as a deductive syllogism:

Premise 1: Jesus promised, “He who believes has eternal life.”

Conclusion: Therefore, I have eternal life.

That is a valid argument. The conclusion necessarily follows from the premises.

Moreover, this argument is Biblical. The promise of life implies this approach to assurance.

When Jesus makes that promise, He invites you to believe it and to draw the appropriate conclusion.

You can see this reasoning at work in the conversation between Jesus and Martha (see John 11:25-26). Jesus told her that whoever believes in Him will never die, and asked if she believed that. When she answered, “Yes, Lord, I believe,” Martha could draw the appropriate conclusion.

Premise 1: “Whoever believes in Me will never die. Do you believe this?”

Conclusion: Therefore, I will never die.

This argument is not only true (because the premises are true), it is also valid (because the conclusion necessarily follows from the premises). In other words, what I call the “Assurance Syllogism” is logically sound. And if you believe it, then you are assured of your salvation.