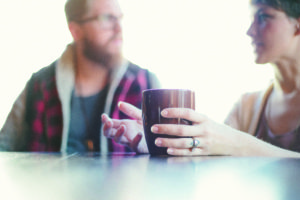 Voice from the Past

I was studying for the ministry, and I heard that D. L. Moody was to preach in Chicago. I went down to hear him. Finally I got into his aftermeeting. I shall never forget the thrill that went through me when he came and sat down beside me as an inquirer. He asked me if I was a Christian. I said, “Mr. Moody, I am not sure whether I am a Christian or not.”

He very kindly took his Bible and opened it at the fifth chapter of John, and the twenty-fourth verse, which reads as follows: “Verily, verily, I say unto you, he that heareth my word, and believeth on him that sent me, hath everlasting life, and shall not come into condemnation: but is passed from death unto life.”

Suppose you had read that for the first time, wouldn’t you think it was wonderful? I read it through, and he said, “Do you believe it?”

“Well, are you a Christian?”

“Mr. Moody, I sometimes think I am, and sometimes I am afraid I am not.”

So I read it again: “Verily, verily, I say unto you, he that heareth my word, and believeth on him that sent me, hath everlasting life, and shall not come into condemnation; but is passed from death unto life.”

Then he said, “Do you believe it?”

“Do you receive Him?”

I just started to say over again that sometimes I was afraid I was not, when the only time in all the years I knew him and loved him, he was sharp with me. He turned on me with his eyes flashing and said, “See here, whom are you doubting?”

Then I saw it for the first time, that when I was afraid I was not a Christian I was doubting God’s Word. I read it again with my eyes overflowing with tears.

Since that day I have had many sorrows and many joys, but never have I doubted for a moment that I was a Christian, because God said it.

*This article originally appeared in Sword of the Lord, October 28, 1988, under the title, “A Conversation Between J. Wilbur Chapman and D.L. Moody.” With their permission it was reprinted in Grace in Focus in February of 1989.