Some of our older theologians—inclusive of many of the “Marrow-men”—spoke much of the appropriating act of faith. It was this act which they supposed to be saving.

“In the direct act of saving faith,” says Anderson, “a person appropriates Christ crucified to himself, saying with the heart, I am verily persuaded that Christ is mine.”

This idea was partly right and partly wrong.

You Should Believe that Jesus Died for You

It was right in so far as it assumed that it is indispensable on the part of the sinner, that he should realize his own “proper” interest in the grace of God and the work of Christ.

He must find the word me in the bosom of the word world.

The language of his faith must be—God so loved me that He gave His only begotten Son that I, believing in Him, should not perish but have everlasting life. The Son of God loved me and gave Himself for me.

It is at once the privilege and the duty of the sinner to “ply diligently,” as Luther used to express it, “the first personal pronoun,” and say me, me. All this is right. It is of great practical moment. It is indispensable in order to have personal peace, and personal joy, and personal hope of glory, and the personal experience of the constraining power of the love of God and of Christ—the constraining power which sweetly urges and impels the believer to a life of reciprocative love and holy devotedness.

Limited Atonement Prevents You From Believing that Jesus Died for You

But the idea of appropriation, as advocated by John Anderson, John Rogers, and many others, was partly wrong, as well as partly right.

They combined with it the limitarian doctrine that the grace of God was really restricted in its outflow, and that the atonement of Christ was really confined in its compass, to a few of mankind—the unconditionally elect.

They did not believe that “God so loved the [whole great] world,” that He sent His only begotten Son to be “a propitiation for the sins of the whole world” (John 3:16; 1 John 2:2).

They thought only of God’s love to the whole elect world, and of Christ’s ransom for some of all classes of men, and of his death, for every one of the many sons whom He brings to glory.

They believed that outside the number of these favored ones there is an immense world of the unconditionally reprobated, whom God never loved, and for whom Christ never tasted death or gave Himself a ransom. They conceived that if Christ had shed His blood for any who are finally lost, it would have been a waste of suffering.

The idea that our Savior’s death should be “in vain” in relation to any, appeared to them a glaring incongruity. They could not reconcile themselves to the notion that One, who saw the end from the beginning, would buy with His blood the souls of those who would “bring upon themselves swift destruction.”

Hence they required to devise a theory of faith which would supplement what was deficient in their theory of the atonement.

In their doctrine of the atonement, and of the grace of the Great Father, there was nothing that enabled them to say to sinners, without distinction or exception, God loves ‘you,’ Christ died for ‘you.’ 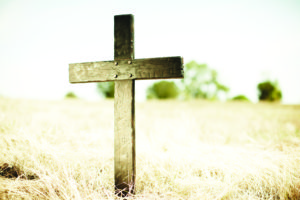 And yet, as they saw clearly that the sinner’s conscience would not be satisfied, nor his heart pacified, until he could say, God loves ‘me,’ Christ died for ‘me,’ they invented a doctrine of faith which enabled the sinner to bring out of the Gospel what the Holy Spirit, according to their theory, had never put into it.

It was unwarrantable doctrine.

The appropriation of antecedent non-existences is an impossibility. The imagination of such an appropriation is a delusion. Faith cannot make a fact of its own object. [Editor: In other words, Morison is arguing that people who believe in limited atonement cannot know for sure if they are one of the elect for whom Jesus died, so they cannot believe that Jesus died for them.]

The notion of Marshall, the author of The Gospel Mystery of Sanctification, that the object of saving faith “becometh a certain truth when we believe it” (p. 142, ed 1836) is a manifest inversion of thought. To have faith is one thing, to have a fancy is another.

Universal Atonement Means You Can Believe Jesus Died for You

But happily, it was no fancy that God loves all, and that Christ died for all. It was only the limitarian creed of the theologians referenced to which was at fault. It was it which was the fancy.

The Holy Spirit has, as a matter of fact, put into the Gospel all that the worthy preachers sought, by means of appropriating faith, to bring out of it.

It is actually the case that the grace of God is to all, and that the atonement of Christ was for all; and hence, when any appropriated to themselves their full share of the universal grace and universal atonement, they only took, though they knew it not, what had been really provided for their use.