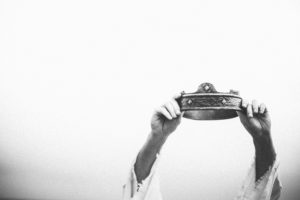 In 1 Cor 9:24 Paul has been speaking of service, of his own call to preach the gospel, and of the importance of faithfully fulfilling his ministry. Then he uses the striking illustration of these closing verses:

Know ye not that they which run in a race run all, but one receiveth the prize? So run, that ye may obtain (1 Cor 9:24).

It is not eternal salvation of which he speaks. We do not obtain the gift of God—eternal life—by diligence or by “running.”

It is not of him that willeth, nor of him that runneth, but of God that sheweth mercy (Rom 9:16).

We are, as Christians, running a race. We are contending in the arena. And for the victors there are fairer crowns than ever were bestowed on the winners in the Olympic Games or on the battlefields of earth. Let us then see to it that we so run that we may obtain the reward.

In the next verse he goes on to remind them that “every man that striveth for the mastery is temperate in all things.” The youth who would win the race is careful to subdue his natural appetites, to “train down” to the proper weight, to hold himself in check lest by self-indulgence on any line he unfit himself for the contest.

Now they do it to obtain a corruptible crown, but we an incorruptible (1 Cor 9:25).

In a few hours the laurel wreath will fade or the metallic circle tarnish and corrode. We are striving for an imperishable prize, a crown that is incorruptible.

All believers who die will be raised in the first resurrection to incorruptibility (as 1 Corinthians 15 assures us), but the incorruptible crown is the prize for faithfully running the Christian race. It is the Master’s “Well done!” at the end of the course.

With such a reward in view, what an incentive do I have for holy living—for self-denying devotion to Christ. Into this Paul himself fully entered. He says:

I therefore so run, not as uncertainly; so fight I, not as one that beateth the air; but I keep under my body and bring it into subjection; lest that by any means, when I have preached to others, I myself should be a castaway2 (1 Cor 9:26-27).

This last word is the negative form of the word that means “approved.” It means therefore “disapproved,” or “rejected.”

The apostle covets above all else the Lord’s approval. He would receive the victor’s incorruptible wreath at the hands of Him who once wore the crown of thorns. With this in view he will not permit the body to be master. He will hold its tendencies in check that he may not by any possibility bring dishonor on his Lord’s name through any carnal indulgence, and so miss His approbation at last.

How many a one has preached to others who has been set aside as a servant and—in some instances—proves utterly unworthy even to bear the name of Christian because he has not held his body under but has given way to fleshly lusts and passions which war against the soul.

To preach well is but to increase one’s condemnation3 if one does not live well. Like the clean beasts of old, mouth and foot must agree, speech and walk must both be according to godliness, if one would win the crown.

The race may seem long, and the way rough and difficult, but the reward is sure for him who keeps his eye on Christ and follows on in the footprints He has left on the wilderness road. To save one’s life is to lose it. To lose it now for His name’s sake is to keep it unto life eternal, and thus to win the incorruptible crown.

H. A. Ironside (1876-1951) was a Canadian-American Bible teacher and former pastor of Moody Church, affectionately known as the “Archbishop of Fundamentalism.”

2. Editor’s note: The KJV translation here is unfortunate as it can be seen to imply loss of everlasting life, which is impossible. As Ironside goes on to say, the word adokimos means disapproved. The believer who fails to persevere will not be approved to reign with Christ.

3. Editor’s note: Clearly Ironside is not speaking of eternal condemnation here. He is talking about disapproval at the Judgment Seat of Christ as the context of this remark makes clear.