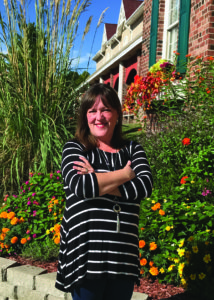 A Heritage of Grace

I guess you could say that I’m both old and new to Free Grace theology. Old, because I grew up in a Free Grace church. New, because for a good long while, I forgot what that even meant, wandered around in a fog of doctrinal error, and only recently found my way back to the clear and simple truth of the gospel.

I grew up in Tulsa, OK, and attended Patrian Bible Church, pastored then by Glen Carnegie (and later, by Dan Hill). The church was a little quirky, extremely patriotic, with a high regard for the military. The pastor was one who loved and taught along the lines of R.B. Thieme. From a young age, I was exposed to in-depth teaching on many topics of Bible doctrine. Most importantly, around age 7, I heard the clear gospel message of John 3:16, and the truth of Eph 2:8-9, and I believed in Jesus for eternal life.

I recall sitting in Sunday school and learning all about how there was a family circle and a fellowship circle, and how once you were in the family circle (saved), you had permanent membership.

So eternal security was a concept I understood and believed in from a young age.

During my junior year in high school, without really having any concept of the doctrinal differences, I started attending a Pentecostal Holiness church with a friend. For me, the focus shifted from security to commitment. For the first time, I was exposed to teaching that said you had better be “prayed up” at all times because if you died in a state of unconfessed sin, you could lose your salvation.

I’m not sure I ever really swallowed this line of thinking whole, but maybe a seed of doubt had been planted.

That was just a set-up for what I experienced in college.

In college, I became involved with Campus Crusade for Christ and attended a well-known Bible church with ties to Dallas Theological Seminary (DTS). Because my former Free Grace pastor and other Free Grace teachers I had known of had come from DTS, I assumed that this DTS pastor and his church would also hold to Free Grace.

So I was caught completely unawares when one night after our large group meeting, I asked a question and received an answer which would land me in the wilderness of Lordship thinking for decades. The pastor from my Bible Church had spoken to our Crusade group that night and something which I can’t recall now provoked me to ask him about the role of works in salvation, as something he had said confused me.

He answered by writing down the following equation on a piece of paper: “salvation = faith + works”.

And as a young college student, despite what I had learned and knew in my heart to be true from Scripture, I allowed this pastor’s background and education to supersede my own beliefs.

This was the beginning of the unravelling of my assurance. It’s ironic, actually. In Crusade, as I was being discipled and trained both to disciple and to evangelize, the gospel tract we frequently used (the Four Spiritual Laws) contained a corollary on assurance. But sadly, the pastor’s words and seeming logic cast a shadow of doubt over everything else I had heard or learned.

A Cycle of Doubts

The ensuing years were marked by pretty intense anxiety over the possible loss of my salvation each time my behavior failed to live up to the standard of holiness I now had in my head. Without even fully realizing it, I was now standing on the sinking sand of my performance vs. the solid ground of His sure promise.

This continued after college, as I attended another Bible church back in Tulsa, whose pastor had studied under John MacArthur. At the time, I was unaware of the Lordship debate and once again, just assumed that in a Bible church, the Word would be rightly divided. While Lordship was not overtly taught, I wouldn’t say I received any teaching to the contrary, either.

During one such episode, a well-meaning friend gave me a copy of John MacArthur’s Saved Without a Doubt. As I seemed to pass all the tests of “evidence” of being saved, my fears were assuaged…until the next time.

And on and on it went, for years into marriage and motherhood.

Just about two years ago, my husband and I had become members of a small, non-denominational church with an intimate, vibrant community and seemingly strong teaching. We sat through an entire sermon series on the book of James called “faith works.” By this time, I suppose the deception had really taken root. The Lordship stance it took seemed so logical. It was as though I had forgotten that there were any alternatives out there.

We later ended up leaving that church because of other errors we were able to discern and returned to a larger Bible church which we had attended for two years previously. Again, we were confronted with error, as contemplative spirituality was being boldly (and shockingly) promoted from the pulpit during a summer teaching series. Again, we left. But this time, we had nowhere else to go.

It was at this point that I became reacquainted with the glorious truth of God’s free grace!

Soon after we left the last church, quite randomly, I clicked on a quote from GES that a friend had posted on Facebook. To my knowledge, this friend is not Free Grace and does not follow GES. In fact, I’ve never seen her post anything from them either before or since.

I had never heard of GES, but liked the quote, followed the link, and for the first time in decades, recalled that a thing called Free Grace actually existed. Exploring their website brought me back to everything I had learned as a child, growing up, and the thick haze of Lordship thinking began to lift.

Through their Free Grace Church Tracker, I found a church 45 minutes from our town. Out of curiosity, though not really expecting it to be an option for us, I decided to check out the church’s website. I thought I might at least be able to find some solid sermons I could listen to online. And boy, did I! It was like finding water in the desert as themes of grace and assurance flooded back.

Eventually, I managed to convince my husband to visit the church. Our first time there, we were asked how we had heard about the church, and I replied that I had found them through the GES church tracker. In about 3 seconds flat, I was introduced to Diane Boring. To say that meeting Diane was a pivotal moment in my Christian walk would be a huge understatement! Diane and I became friends, and a running dialogue about grace began. Diane is amazingly generous and began to loan me every book ever published by GES (just a slight exaggeration).

Reading Bob Wilkin’s A Gospel of Doubt and Zane Hodges’s Absolutely Free felt like having a giant boulder removed from my shoulders. The truth became crystal clear again, and I felt a freedom in Christ that I had not experienced in years.

This past Christmas, my kids and I put together some care packages for a few homeless people in our area. While the goodies were nice, I knew that what they really needed was hope. And for the first time in what felt like forever, I knew that I was capable of delivering exactly what they needed. For years I hadn’t wanted to share my faith, as for me, the good news had become not-so-good. Now, however, it was all so clear and simple again. I wrote out a heartfelt prayer and the words to John 3:16 and included them in each care package. I knew now that I didn’t need to add any caveats or provisos to the simple requirement of faith in Christ for eternal life. The good news which I shared with them had once again become good news to me!

The past several months, I’ve enjoyed interacting with other commenters (some of you!) from the GES blog, before the closure of their comments section. Truly, that interaction has caused me so much opportunity for sharpening, refinement, and growth. I couldn’t be more appreciative to all who’ve helped to shape my understanding today!

Looking forward to more of the same here!

Kelley and her husband Marcus live in northwest Arkansas, where they navigate the daily joys and struggles of homeschooling two kiddos and raising a late-in-life baby.