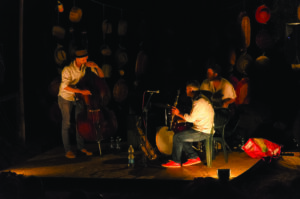 A few years ago, my husband and I got the chance to visit Nashville, Tennessee. It was an incredible trip, where we got to walk downtown and hear music flood the streets from the honky-tonks and open mics that make the town famous. We visited the Country Music Hall of Fame and the Grand Ol’ Opry. We ate too much fried goodness, but more than that, we got a taste for what really makes Music City so magical.

There are many attractions in the city, but one in particular is the Blue Bird Café. From native Nashville residents to the nerdy tourists, this small café is renowned for its intimate setting and its celebrity sightings. Located in a small strip mall, you might not even notice it. It can only hold 90 people, making seats hard to come by, which only adds to its charm.

Every night, three or four song writers and musicians, both new and old, will sit in the center of the café and swap stories and songs while everyone eats yummy southern food. It’s incredibly intimate and makes the audience and the artists feel more like childhood friends, rather than strangers. Singers like Garth Brooks got their big break at the Café, and on any given night you might see anyone from Carrie Underwood to Steven Tyler perform.

I love the portrait of intimacy that the Café provides for their patrons. I think it’s this intimacy around a meal that we often see in Scripture as well, especially as it relates to rewards in the coming kingdom (Matt 8:11). The Last Supper comes to mind. A small group of men, sitting around a table with the Lord while He lovingly teaches them and communes with them around a meal. We also see in Scripture that there is a wedding feast that is to come, and those who will be rewarded greatly will be given the honor to sit closer to the Lord (Luke 14:7-14).

Recently, I was studying in the Book of Revelation, and I was struck by a verse that provided a new layer to my understanding of rewards and the intimacy that will be given to faithful believers. In Revelation 14 the Apostle John has a vision of the 144,000 with the Lord. These are Jewish witnesses that come to faith in Jesus during the tribulation period and testify to the Lord among the nations during those seven years. In the vision, John sees them with the Lord, with His name written on their foreheads (v 1). There are harpists playing, and then in verse 3 we are told that the 144,000 sing.

“They sang as it were a new song before the throne, before the four living creatures, and the elders; and no one could learn that song except the hundred and forty-four thousand who were redeemed from the earth” (Rev 14:3, emphasis added).

We are told in this verse that the 144,000 are singing a new song. Not only that, but this song is special. It is one that only the 144,000 know. It is a song that no one else can learn. It’s a unique song of worship, meant just for this group of faithful believers.

I am reminded of the Blue Bird Café. A small group of people, in an intimate setting, given the honor of hearing a new song. Unlike the Café though, this song is not just any teenage love song or funny ballad about a truck. This song was written just for them to know and to sing. Not only that, but this song wasn’t written by a country music star; it was given by the Lord as a special, intimate moment of worship for these faithful believers.

With this verse, I think we are given another glimpse into what rewards will be like for the overcoming believer. Much like patrons in the Blue Bird Café, faithful believers will sit with the Lord over a private meal, and not only will they be given the privilege to sit closer to the Savior, but also there will be a time of singing, and in that time of singing, there will be special songs for certain groups of people.

Worship With the Savior

On the night of the Lord’s death, we are told that after the meal they sang a hymn (Matt 26:30). I have always found that verse interesting. What was the song that they sang? Was it based on something in the OT? Most scholars say it was a Psalm. Did it foreshadow His death or have some other meaning? Some Psalms certainly did.

Whatever they sang, I think ultimately it was meant to be a picture of intimacy and worship with the Savior. A special Blue Bird Café, just for those companions of the Lord. My prayer is that we all strive to have that same intimacy with the Lord, and perhaps we too will have the privilege of learning a new song in the coming kingdom.