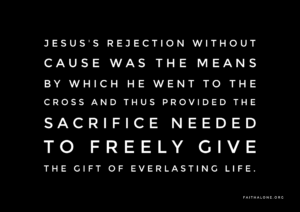 Dōrean is an important NT word with two basic meanings:

These meanings are tied together in their basic sense. That which is “freely” given is given “without cause” in the recipient. It is thus free to the receiver of the gift. The related noun [dōrea]—gift has the same basic idea. A gift is that which is freely given. If there is a cost to the recipient, it is not a gift.

A Surprising Usage of Dōrean

I had long been familiar with the first sense of dōrean. While reading recently, I was surprised by an occurance of dōrean in the second sense, without cause.

“Remember the word that I said to you, ‘A servant is not greater than his master.’ If they persecuted Me, they will also persecute you. If they kept My word, they will keep yours also. But all these things they will do to you for My name’s sake, because they do not know Him who sent Me. If I had not come and spoken to them, they would have no sin, but now they have no excuse for their sin. He who hates Me hates My Father also. If I had not done among them the works which no one else did, they would have no sin; but now they have seen and also hated both Me and My Father. But this happened that the word might be fulfilled which is written in their law, ‘They hated Me without a cause [dōrean]’” (John 15:20-25, emphasis added).

Jesus, shortly before being betrayed, admonishes the eleven disciples remaining with Him that they would be persecuted because of being aligned with Jesus. He states that the world hated Him without cause [dōrean]. There was nothing wicked in Jesus to warrant the people’s rejection of Him. Contrastingly, there is nothing good in us to warrant His freely giving us everlasting life.

John’s other uses of Dōrean

John, the apostle who penned these words under the Holy Spirit’s inspiration, used the adverbial form of dōrean two other times.

And He said to me, “It is done! I am the Alpha and the Omega, the Beginning and the End. I will give of the fountain of the water of life freely [dōrean] to him who thirsts.” (Rev 21:6)

John also used the noun form, dōrea, while speaking of Jesus’s gift to the Samaritan woman at the well:

Jesus answered and said to her, “If you knew the gift [tēn dōrean] of God, and who it is who says to you, ‘Give Me a drink,’ you would have asked Him, and He would have given you living water.” (John 4:10)

The Harmony of these Usages

These differing senses (without cause/freely) meet in a subtle note of irony when we see that Jesus’s rejection without cause [dōrean] was the means by which he went to the cross and thus provided the sacrifice needed to freely [dōrean] give the gift [tēn dōrean] of everlasting life.

As I thought about these differing usages a few parallels emerged.

He suffered without cause in Himself and at great cost to Himself to freely give everlasting life to those who had no cause in themselves to merit His love. Let us praise Him for the greatness of His grace!