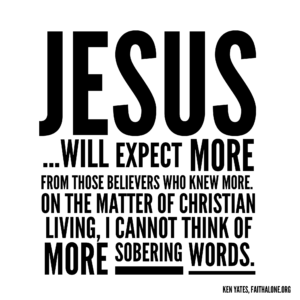 To me, one of the most interesting verses in the Gospels is a statement by Jesus in Luke 12:47-48. Jesus gives a parable about who is a wise servant of the master and who is an evil servant of that same master. In the parable, the Lord says that His servants will one day give an account to Him. He concludes the parable with these words:

These verses are interesting for a number of reasons. First of all, the Lord says that at least some of His servants will be “beaten with stripes.” Some will be beaten with many, others with few. The determining factor is how much they knew.

Many, if not most, Bible teachers do not believe there will be the Judgment Seat of Christ where Christians will one day give an account of the lives they lived. They do this, in part, because they believe that all “true” Christians live godly lives. But this parable by the Lord indicates that some Christians do not live godly lives and such believers will be rebuked by the Lord. There will be some kind of punishment. In addition, there will be differences at the Judgment Seat of Christ in the rebukes believers receive based upon the knowledge they had.

I looked at a couple of commentaries recently from Bible scholars who do not believe there will be a Judgment Seat of Christ that deals with rebuke and rewards for Christians only. One said that the parable is saying that if a person receives such a rebuke from the Lord he is not really a Christian.

Another well-known commentary on Luke does not make a firm decision on the issue at hand. It basically states that the servants receiving punishment may or may not be a true believer. It does not discuss what it means if it is referring to a Christian.

It is so frustrating to read things like that. No neutral reader can read these verses and not understand that Jesus is saying that He is going to hold His servants, that is believers, accountable for their actions based upon how much they know. Only a theology that from the start says that all believers are faithful to the Lord and will be praised by Him when He returns could conclude otherwise.

These verses are clear. At the Judgment Seat of Christ there are going to be many differences in the verdict of the Lord. This verdict has nothing to do with whether the believer enters into God’s Kingdom or not. It has everything to do with rewards in that Kingdom and the loss of such rewards.

But the second interesting thing about these words is that Jesus says that on that day He will expect more from those believers who knew more. On the matter of Christian living I cannot think of more sobering words. James says in his book that teachers of the word of God will be judged more strictly on that day. It seems clear to me that the reason for this is that they have a greater responsibility.

Jesus makes a parallel point here. Those who have more knowledge of what Christ requires and the reasons for those requirements have a greater responsibility to act upon these things. Has there ever been, in the history of the church, a group of Christians with more knowledge of these things than those of us who have been exposed to Free Grace teachings? We meet people all the time who know that they have eternal life through faith alone, but have never been exposed to sound exegesis on many passages. They have never heard about a Judgment Seat of Christ and the rewards involved at that Judgment.

But many of us have. We are the ones “to whom much has been given.” While our eternal destiny is not in question, what the Lord will say to us when He returns is something we should meditate on and pray about. What have we done with the knowledge we have?