Have you ever felt guilty for not evangelizing?

Has evangelism ever been presented to you as a command that is impossible to fulfill?

Here’s an example of the kind of pressure I mean. This is a testimony from the wife of a graduate of a fundamentalist college:

“My poor husband got only 3 to 4 hours sleep at night during the week while going to night college…Every night he was told how stupid he was, and lazy he was, and wicked he was, and his only salvation was this college and learning how to model himself after the great and wonderful Jack. Then came the weekend, but if I thought I’d actually get to see my husband, I had another thing in store for me. We were told the Sailor ministry (at Great Lakes Naval Training Center) was more ‘family-friendly’ than the bus ministry because we all could participate together. All that meant was that our whole family was required to be their indentured servants. My husband left for the base at six in the morning, and I didn’t see him again until four in the afternoon, when he would pass by me in line as I helped serve the meal we had prepared for 100 men. Then he was off again until midnight when he would returned with five to ten men (sailors) who I would have a meal waiting for. Then they would all shower and we would make them a bed on our floors and lock ourselves and our children into our bedroom, then up the next morning at five to make the sailors a ‘home-cooked breakfast.’ Then a full day of preaching and feeding the sailors again at our ministry base.

“If you ever missed a week, you were told you didn’t love your sailors and wanted them all to go to Hell. There were weeks that our children only saw their dad for a few hours on Friday nights. It’s amazing that they didn’t seem to care if we loved our children enough to spend some time with them to keep them out of Hell; no wonder MOST of the faculty and staff kids ended up rebelling and leaving the place” (Quoted in David Cloud, The Hyles Effect, pp. 46-47).

That’s a lot of pressure. Too much pressure. It turns evangelism into legalism. And as with any legalism, it brings condemnation, anxiety, and burn-out.

That turns the good news into bad news.

I want to suggest a different perspective.

So here’s my outrageous statement:

Personal evangelism is not emphasized in the New Testament.

That’s right. I’m claiming there is little to no emphasis on soul-winning. It’s not a big theme. There’s no command to go door-to-door, or to sacrifice your family to reach people before they go to hell, or to spend every waking moment talking to strangers about Jesus.

There is a verse that says God has given some people the office of being an evangelist (Eph 4:11), but there’s no explanation about what that means or what they’re supposed to do.

And you could take the “Great Commission” (Matt 28:19-20) as a command to evangelize, but that’s debatable, especially in Dispensational circles. For example, J. N. Darby took that to be a command to the apostles to preach the gospel of the kingdom. He did not think it was a command to Christians to share the message of how to be born again. But even if you do take the Great Commission in that way, it still doesn’t mean personal evangelism is heavily emphasized in the NT. I can’t prove that from the Bible, because I’m claiming it’s not in the Bible.

But don’t throw those tomatoes at me yet! Bear with me. This will all make sense in a moment.

The New Testament heavily emphasizes the importance of loving your neighbors.

No one can argue with that. Love is written across the NT. Here are two examples:

Now as to the love of the brethren, you have no need for anyone to write to you, for you yourselves are taught by God to love one another (1 Thess 4:9).

Clearly, we ought to love one another—beginning with our immediate families, then our church family, co-workers, strangers, and even enemies.

Now here’s a third statement I think you’ll agree with:

The New Testament says you should be able to give a reason for your faith.

Always be prepared to give an answer to everyone who asks you to give the reason for the hope that you have. But do this with gentleness and respect (1 Pet 3:15 NIV).

Let your speech always be with grace, as though seasoned with salt, so that you will know how you should respond to each person (Col 4:6).

That is a form of evangelism. But that’s not the same as being pressured to go out into the world and evangelize strangers door-to-door or on a street corner (I used to do street preaching in Montreal) or by standing in a subway. If someone asks, “What hope do you have?” you should be ready to tell that person about Jesus. 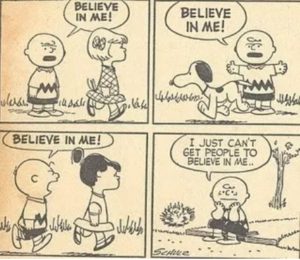 You can’t go around demanding that people believe you, right? Of course, that doesn’t work.

But isn’t that what often passes for evangelism today?

Sure, some people might come to faith that way, but not often. And certainly not the majority of the time. In fact, the research is clear and consistent that the most common way of coming to faith is through a family member, friend, or co-worker (75-90%, according to Win Arn; 55.6%, according to Gary McIntosh).

In other words, you come to faith through someone whom you know well, who loves you, and who genuinely cares for your well-being. Most of the time, that is the kind of person who leads you to faith.

So here’s my suggestion: the normal way of evangelizing is to love people first, then seek opportunities to tell them about Jesus and the promise of eternal life. Chances are, they’ll ask about your faith. When they do, give them an answer.

So love the people you are already loving, at home, at work, and all around you, but with this difference—be ready to tell them about Jesus when the opportunity arises.

Isn’t that good news about the good news?