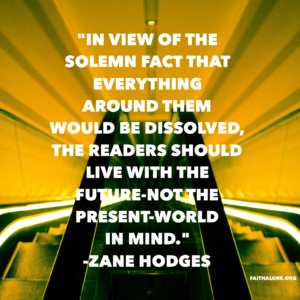 by Zane Hodges, excerpted from his commentary on 1 Peter

3:10. In the Greek text the word translated will come stands first in the sentence and is clearly emphatic. The false teachers will insist that the day of the Lord will not come, but—says Peter—it will!

What is especially striking here is that Peter passes immediately from thearrival of the Day of the Lord to its consummation: the heavens will pass away and the earth and the works that are in it will be burned up. Obviously, Peter is not concerned with the multitude of specific events that occur during this unprecedented time period, but only with its final outcome. That outcome will be new heavens and a new earth (v 13).

Some have concluded that this overleaping of prophesied events (e.g., the Millennium) indicates that the writer does not believe in those events. Two fallacies are involved in such a conclusion.

First, simply because a person fails to mention something is not a valid basis for thinking he does not know about it. Second, both the OT and the NT teach that the first thousand years of our Lord’s eternal kingdom contain rebellion and sin. This is plain from Zech 14:16-19 and from the fact that the rebellion of Gog and Magog (Rev 20:7-9) follows the Millennium.

But here he is not concerned with writing about the Millennium. Instead he chooses to treat the Day of the Lord as that climactic period in human history that is initiated by the fulfillment of God’s promise about the coming of His Son. When this time period is over, there will be a new creation.

Whereas the Day of the Lord does come as a thief in the night, the old heavens and earth do not just silently pass away. Instead, Peter describes a picture of their dissolution that is visually and audibly dramatic.

Actually, he begins his description of this in terms of audibility: the heavens will pass away with a great noise. As is well known, 20th century science discovered the fact that the universe in which we live is an expanding one. Given this kind of image, the collapse of the stellar heavens will be accompanied by a rushing noise. All of the elements in our universe will melt with fervent [fiery] heat, i.e., they will be destroyed by burning. As this fiery conflagration takes place, the earth and its products will be burned up. The fiery shriveling of earth and everything it contains will occur as part of the universal implosion that ends the present creation and removes all taint of sin. How vain it is to focus on the things of this world! They will all be gone someday along with the universe of which they were but a tiny part! A spiritually perceptive Christian will live with this fact in mind.

3:11. In view of the solemn fact that everything around them would be dissolved, the readers should live with the future—not the present—world in mind (v 13). As people who possess this future perspective on the things around them, the readers have a moral obligation to live appropriately. This obligation is not elaborated here. But it is deeply embedded in the instructions that our Lord Jesus Christ gave His disciples (e. g., Matthew 24–25; Luke 12:22-48), and which they in turn have transmitted to us. The readers of 2 Peter, therefore, should seek to be the manner of persons who are characterized by holy conduct and godliness.

Peter is thinking here of the many specific ways in which a believer ought to make plain in his behavior that he is living with God’s eschatological promises in view. They are the motivating dynamic for the Christian’s everyday conduct so that he can experientially participate in the divine nature.

3:12. The apostle now explicitly couples his call to holiness with a fresh enlargement on his eschatological outlook. In 3:1-10 he has spoken primarily of the Day of the Lord. In harmony with its use elsewhere in Scripture, Peter’s treatment of this Day lays stress on the judgment that it brings. We need to think carefully about this and how it relates to the day of God.

It is clear both here and in the teachings of Jesus and Paul that whenever the final divine judgments on this earth begin, the Day of the Lord also begins. But as we noticed in discussing 2 Pet 3:10, Peter has overleaped the first one thousand years of our Lord’s reign on earth (the Millennium) and brings us at once to the conclusion of the Day of the Lord in the dissolution of the old cosmos. This entire span of time is the final manifestation of God’s judgments against human sin. And even though the Millennium is mainly peaceful until the rebellion of Gog and Magog (Rev 20:7-9), it is nevertheless a time when God acts directly against human wickedness. Further, Peter again describes the end of our present universe as one in which the elements will melt with fervent heat (cf. 2 Pet 3:10).

This is the very last judgment of all. But we should not take this statement as a mere repetition of what Peter has just said in v 10. To be sure, he is describing the very same event, but this time that destruction is put into the context of God’s overall purpose for His creation.

The Day of the Lord, therefore, is the time period beginning with the Second Advent in which all wickedness is forcefully suppressed. As Paul puts it, Christ “must reign until He has put all enemies under His feet” (1 Cor 15:25). Then, when King Jesus “delivers the kingdom to God the Father” (1 Cor 15:24), His Messianic mission will be fulfilled, and “the everlasting kingdom of our Lord and Savior Jesus Christ” (2 Pet 1:11) will become, in the fullest and most final sense, the eternal kingdom of God. All that is contrary to God, and outside His will, will have been banished from this new creation forever.

The readers are to be looking for and hastening this coming day. Actually the NKJV’s hastening is not the best translation. In this context the Greek means eagerly awaiting (cf. Acts 20:16). Believers cannot move up this day. But they can and should look for it with eager anticipation.

3:13. The bottom line of this exhortation is that “the coming of the day of God” brings with it new heavens and a new earth in which righteousness dwells. Unlike the old heavens and earth that have been plagued with the presence of sin ever since the fall of Adam and Eve, the new world will be a place where righteousness will be truly and permanently at home. Such a world is one for which it is well worth praying with deep anticipation.