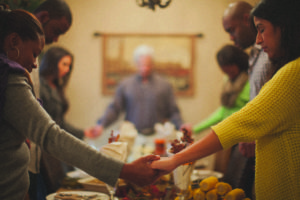 Thanksgiving is a wonderful holiday, not just for turkey dinners and a day off work, but because it is an annual reminder — often overlooked but ever-present— that we have much to be thankful for. The one we are thankful to, of course, is God. Our culture largely ignores it, but it whispers in our hearts: Thank you, Lord, for Your bountiful goodness to us!

Last year, the real significance of God’s “unspeakable gift” to us was driven home for me in an unexpected way, a way that was mixed with tears. Glenn Easterly, a godly man and close friend, was suddenly taken home to be with His Lord. A few months later, my mother, a uniquely loving and godly woman, stepped across that threshold between time and eternity and into the arms of her Lord. And then, on the day before Thanksgiving, a dear sister in Christ, René Broughton, slipped from this life, to her eternal reward.

In each of these events, my tears have flowed and my thanks were given. It seems almost schizophrenic to be saying “Thank you” to God, and weeping at the same time, but it’s not. In fact, if I were not able to say “Thank you,” I don’t think I could weep. Deep inside our souls, we yearn for that eternity which God made us for. In this life, we’re stuck in time and space…and sin. Paul wrote that we “groan within ourselves, waiting eagerly for our adoption as sons, the redemption of the body” (Rom 8:23).

If not for God’s gift of eternal life (John 4:10; Eph 2:8-9), I wouldn’t weep in the face of death; I’d be in terror of it. But Thanksgiving, with its reminder of a God Who is good and Who gives, reminds me through my tears that those who believed in Jesus and who we have bid “Farewell” to in this life, are with their Savior and no longer bound by this life’s limitations. I’m not sad because I won’t see them again, but because I will! And I can hardly wait.

For in hope we have been saved, but hope that is seen is not hope; for who hopes for what he already sees? But if we hope for what we do not see, with perseverance we wait eagerly for it.

I love that. In the face of death, I am not hopeless. In fact, I am hopeful! I wait eagerly for what absence from the “body of this death” (Rom 7:24) will mean. I just can’t “see” it yet.

This year, Thanksgiving on this side of the veil is seasoned with tears, because I miss those who have gone on, and look forward to being with Christ, and being reunited with them.

Tears…tears of sadness, silver-lined with hope. That’s my Thanksgiving this year. And when your life journey leads you through the valley of the shadow of death, may it be yours, too.