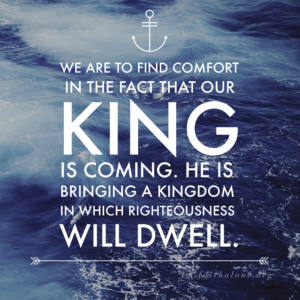 The book of Psalms expresses the deep emotions and experiences of God’s people throughout the centuries. Recently I read Psalm 10. Most believe it was written about 3000 years ago by David. However, while reading it I had the feeling that it could be written by a Christian today.

In the first part of the Psalm (vv. 1-11) David decries the evil all around him. The evil is so prevalent, it appears to David that God does not see what is happening. It is as if God is standing far off and is not interested (v. 1).

The wicked of the world in which David lived persecute the poor, the innocent, and the helpless. Sometimes these words describe the people of God in the Old Testament. At the very least, they describe those whom God defends.

But David does not see God intervening. The words that the Psalm uses say that the wicked burn (the word “persecute” carries that idea) and crush the helpless. Like a lion with its prey, the wicked even kill the weak and helpless. In all of this, the wicked become rich by doing such thing.

In addition, the wicked either proclaim that God does not exist, or if He does exist, will not do anything about what they are doing. They will not be held responsible for their actions.

To put it simply, the wicked do not fear God. But they also do not fear man. They “sneer” at those who oppose them. Nobody can oppose them (vv. 5-6). We would say such people see themselves as being above the law of God or of man. In David’s eyes they only seem to become stronger by the day.

They are arrogant and use deceit to accomplish their goals. Their character, actions, and words are all evil (v. 7).

Can we see direct applications of this Psalm in our day? Do we see those who ignore God, those who oppress the weak and innocent, those who are deceitful, those who are above the law, and those who become rich while doing these things?

Surely we can. We are all familiar with terrorist attacks both in our country and around the world. We see even innocent children massacred, run over by a wicked man driving a truck. We see Christians in other countries being burned alive, beheaded, and their daughters kidnapped and forced to marry or sold into prostitution. Such activities occur with increasing frequency and we seem to be able to do nothing to stop them.

Even in our own country, we hear stories of horror concerning what is going on in organizations like Planned Parenthood. In these places the most innocent of all are crushed in their mother’s womb. Those who do such things then become rich by selling the body parts.

We see politicians lie before Congress concerning matters that impact innocent lives. Though they lie and break the law, they suffer no consequences. The powerful among us seem to be above the law. They often become richer and more powerful by the day.

We can certainly put ourselves in the shoes of David and agree with his assessment in the first part of this Psalm. But David does not stop there. He says that it seems that God does not see what is going on. But in the last half of the Psalm he says such appearances are deceptive. In verse 14 he says that God does see what is going on. He is the eternal King (v. 16) and will judge the evil in the world.

Of course, we know that God will do it as well. The New Testament is full of statements saying God will judge the world. God has not done so yet because He is merciful. His mercy extends even to those who despise Him. Christ died for them. When He does judge the world, many will perish in that judgment and God does not delight in the death of the wicked.

Yes, whether we are speaking about David’s day or our own, it seems that evil is winning. But that is only on the surface level. We are to find comfort in the fact that our King is coming. He is bringing a Kingdom in which righteousness will dwell.

“This is my Father’s world.
O let me ne’er forget
That though the wrong seems oft’ so strong,
God is the ruler yet.”

from the hymn, “This is my Father’s World” by Maltbie Babcock