Home
→
Blog
→
The Message of Life in Kenya
December 27, 2016 by GES Webmaster in Blog - Missions
[mp_quote cite=”Samuel, Kenyan Pastor” cite_url=”#” quote_content=”“I realize now that I have to go back to my congregation and confess that I have been teaching lies. We must return to God, and we can only do that by returning to Scripture.””] [/mp_quote]

GES friend, Lucas Kitchen, taught at a pastor’s conference in Kenya earlier this year. We are delighted to share his report.

Acres of Mercy has a connection with a large number of pastors in and around their area. In February, Catherine and Jimmy asked if I (Lucas) would be willing to come and teach a pastor’s conference in the Kenyan city of Talla. By day one of the conference there were about 60 pastors registered.

This was a very important aspect considering the theological background of the pastors who came. Few, (none that I know of) had ever received formal Biblical training. Secondly, many of them had been teaching their congregations that salvation is either gained or maintained by works.

We were allowed to use a single classroom at a local public school for the week-long conference. The amenities were quite primitive, but the minds of the pastors were not. They were sharp, eager to learn, students of the Word. They were locked into the material from day one.

The Gospel of John is very clear that eternal life is a free gift, with only one condition to receive it; believe in Jesus. However, this idea did not sit well with a handful of the pastors who were there. A group of pastors lead by a man named Samuel opposed the concept of free salvation openly at the end of the first few sessions.

I was concerned because I could imagine the rest of the week descending into broken communication and endless debate. I made a point to talk with each of these pastors kindly at the end of the day. We smiled and laughed, but there was tension there.

The next morning, John and Randy (the other two Americans who I traveled with, who were there to drill water wells) spent some time with Samuel, the pastor who opposed our message. They rode with him to his church to find spots to drill wells on the church’s property. I didn’t realize it then, but this was perfect timing. I might even say it was divinely planned.

As John and Randy spent time with Samuel away from the conference it allowed us to move forward without resistance. Secondly, it allowed Samuel to see something that he needed to see. John and Randy had a series of one on one conversations with him that changed something.

When Samuel arrived back at the conference mid-day his demeanor and attitude was totally different. He greeted me with a hug and warm smiles. Pastor Samuel shook my hand and said, “you are breaking everything… but these are things that need to be broken.” He explained that he had never studied the Word in the way that we were studying it and it was opening his eyes to many things. The other handful of pastors who had opposed us one by one followed his lead and softened as well. 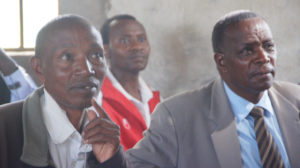 The week went on and the momentum built. We continued through the chapters of John seeing how eternal life is absolutely free, and there’s nothing one can do to lose it. We talked extensively about what it means to abide in Christ, and obey his word. The pastors were engaged in a powerful way.

There was a pastor who sat on the front row all week. We were told that his church had a congregation of over 1,000 people. He was deeply impacted by the study of the Gospel of John. At one point he said, “I was taught to share the Gospel by teaching the Old Testament law first. I now see that this must change.”

Toward the end of the week we had a young pastor stand up in our discussion time. He said, “This has changed my method for evangelism forever.” He went on to explain that he now understood that he had been teaching false doctrine. Another young lady said, “This has exploded my mind!”

Probably the most moving quote came from Samuel. Samuel had been the most outspoken opponent at the beginning of the week. We watched as the Gospel of John slowly transformed his mind. After our final day he came up and shook my hand. With joy and pain in his voice he said, “I realize now that I have to go back to my congregation and confess that I have been teaching lies. We must return to God, and we can only do that by returning to Scripture.” He hugged me as I thanked him for his honesty.

This amazing week reminded me of the power of the Gospel of John. These open-hearted pastors were faced with the incredible story of Jesus, and the free gift He offers. Many committed to change the way they do ministry based on the words in John. I can’t wait to see, in future years, what God will do in the lives of these incredible people. The clear Gospel of God’s grace is spreading like fire in Kenya and it will be exciting to gather stories as these pastors go back to their churches. Below is a picture of all the pastors on graduation day.

Be flexible. The thing that carried the most weight with the pastors there, was for them to see that we were committed to teaching what the Bible says. We wanted to show that we were not bringing some “American” way of thinking, but instead we were committed to following and teaching whatever the Bible instructed. Over the week as disagreements arose, we just kept going back to the Bible and pulling meaning from there. What we were told is that many of their local pastors at churches in the region say, “This is what God says” often, but they don’t show it from the Bible. Second, (and probably most important) LISTEN. We spent lots of time listening to the stories and the ideas of the pastors. This went a long way in having them listen to us. Thirdly, it was important to them to have a certificate of completion from us. We were told that the pastors who we taught will hang that certificate on their wall and cherish it for the rest of their lives.

Lucas took 50+ GES books and they are being used by pastors and others: 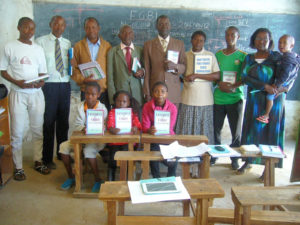 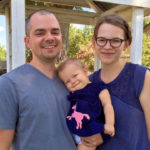 Lucas and his wife Kristah serve with simplybelief.com, producing tracts and other resources to help proclaim Jesus’s free gift of everlasting life.