Most people get their theological education from Hollywood. Show of hands—how many people think that Satan is the boss of hell?

You know the image. It’s played as a joke—hell is where Satan rules, and the name of the game is torturing people. That’s his job and demons are his underlings.

For example, that’s the premise of the recent show, The Good Place.

Or think of how hell is often depicted in The Simpsons: 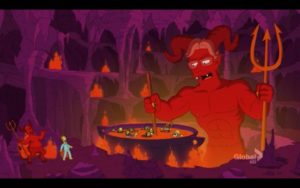 Or here’s a typical Far Side gag: 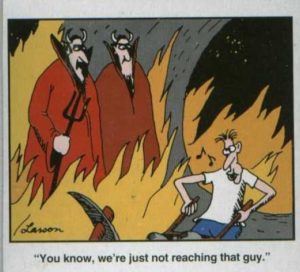 Where did you get the idea that Satan is the boss of hell, in charge of torturing people? Did you get it from the Bible?

Not at all—for two reasons.

First, there is no such place as “hell.” Hell is an Old English word, with an Anglo-Saxon pedigree, that the King James Bible translators chose to use as a blanket term for several different Hebrew and Greek words. Consequently, that gave the false impression there was only one “bad” place in the underworld, when, in fact, there are several “bad” places that creatures can end up: Hades, the Abyss, Tartarus, Gehenna and the Lake of Fire. I like this chart by Clarence Larkin (though he, too, uses the traditional term “hell” for the bad side of Hades). The Biblical underworld has several neighborhoods.

Second, the Devil is not the boss of any of those bad places. Quite the opposite. The fallen angels are imprisoned in Tartarus (2 Pet 2:4; Jude 6). During the Millennium, the Devil will be imprisoned in the Abyss for a thousand years (Rev 20:2-3). Jesus said the Lake of Fire was prepared for “the devil and his angels” (Matt 25:41). After the Millennium, the Devil will be cast into the Lake of Fire, not to reign there, or to come up with new and interesting ways to torment the people in it, but to be tormented himself for eternity (Rev 20:10).

Hollywood’s theology of hell is abysmal, but a good reminder to test all your beliefs against Scripture.