Christians around the world celebrated the day when Jesus rose from the dead.

Truthfully, we do that every Sunday, but, by tradition and convention, it’s especially celebrated once a year—Easter Sunday.

Why do I believe that Jesus was resurrected?

Admittedly, the resurrection is an extraordinary claim. Yes, there are many documented cases of people dying and coming back to life, but it is usually within minutes of being pronounced clinically dead—it’s never after three days.

As a rational person, how do I know that Jesus rose from the dead?

For one, I think about Jesus’ half-brother, James.

By the way, did you know that Jesus had brothers and sisters? In fact, He had at least four brothers and two sisters:

“Is not this the carpenter, the son of Mary, and brother of James and Joses and Judas and Simon? Are not His sisters here with us?” (Mark 6:3).

I say Jesus had at least two sisters because sisters is plural. Then there was Joses, Judas, Simon, and finally, James.

Let me focus on James.

If anyone has ever seen your bad side, it’s your family. Those of us living through the current coronavirus quarantine know all about that, don’t we? Your family sees it all—every flare up of anger, every act of moodiness, surliness, and deceit—and hopefully moments of compassion and love, too. There are no illusions when it comes to your family.

That would have been true of Jesus’ family, too.

James knew Jesus. And he found it hard to believe that Jesus was the Messiah. In fact, none of His brothers believed His claim. They even tested and teased Him because of His ministry:

After these things Jesus walked in Galilee; for He did not want to walk in Judea, because the Jews sought to kill Him. Now the Jews’ Feast of Tabernacles was at hand. His brothers therefore said to Him, “Depart from here and go into Judea, that Your disciples also may see the works that You are doing. For no one does anything in secret while he himself seeks to be known openly. If You do these things, show Yourself to the world.” For even His brothers did not believe in Him (John 7:1-5, emphasis added).

“Even His brothers did not believe in Him”—including James!

In fact, he (they) probably thought Jesus was out of His mind:

One time Jesus entered a house, and the crowds began to gather again. Soon he and his disciples couldn’t even find time to eat. When his family heard what was happening, they tried to take him away. “He’s out of his mind,” they said (Mark 3:20-21 NLT).

James thought Jesus was crazy—but He didn’t go as far as the religious leaders who said Jesus was possessed by the devil (cf. Mark 3:22). That’s a different story. In any case, James probably worried about Jesus. The family tried to intervene, and Jesus had to distance Himself from them:

Then His brothers and His mother came, and standing outside they sent to Him, calling Him. And a multitude was sitting around Him; and they said to Him, “Look, Your mother and Your brothers are outside seeking You.” But He answered them, saying, “Who is My mother, or My brothers?” And He looked around in a circle at those who sat about Him, and said, “Here are My mother and My brothers! For whoever does the will of God is My brother and My sister and mother” (Mark 3:31-35).

James probably followed Jesus’ ministry from a distance. He heard the stories. And when, after three years of ministry, he heard that Jesus was arrested, tried, and crucified, James must have mourned. No one wants to see his brother go to jail, let alone be tortured and nailed to a cross—especially not for being out of His mind. 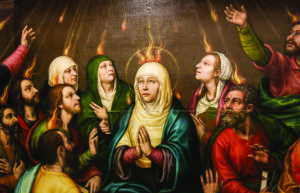 We don’t know if Jesus’ brothers went to see Him hang on the cross, but His mother, Mary, was there:

But standing by the cross of Jesus were His mother, and His mother’s sister, Mary the wife of Clopas, and Mary Magdalene (John 19:25).

When Jesus saw Mary, He told the young apostle John to take care of her as if she was his own mother:

If Jesus had stayed dead, here’s what you would have expected from James—to be sad and a little ashamed of his “crazy” brother Jesus. You would also expect him to remain an unbeliever. He would still not believe that Jesus is the Messiah.

But here’s the amazing thing—James came to faith in his own brother!

Forty days after the tomb was emptied, on the day of Pentecost, we find Mary praying in the upper room with the rest of the disciples—and Jesus’ brothers are there, too! That includes James!

These all with one mind were continually devoting themselves to prayer, along with the women, and Mary the mother of Jesus, and with His brothers (Acts 1:14, emphasis added).

There is James, praying and waiting with the other believers for the Holy Spirit.

James from from skeptical brother to faithful bondservant. What a turnaround!

How do you go from being an unbeliever who thinks his brother is out of His mind, to being a leader in the movement proclaiming that your brother is Messiah?

The best explanation for what happened is the one Christians celebrate every Easter—that Jesus really, truly rose from the dead.

As Paul recounted, after appearing to the five hundred, Jesus appeared to His brother:

The resurrected Jesus was seen by James. That must be when James believed. He knew Jesus had died. He thought Jesus was a phony. Then his resurrected brother appeared to him…and James believed! He not only believed, but he devoted the rest of his life to telling people his brother is the Messiah!

So back to my original question: How do I know that Jesus really rose from the dead?

For one thing, I know it from the result of James’s life. Only the resurrection best explains the change that occurred in him.

After witnessing the resurrection of his brother, James believed that Jesus was the Messiah. And by so believing, he received eternal life (John 11:25-26). That is what the risen Jesus promises you, too. And if you believe in Him, you are saved forever.