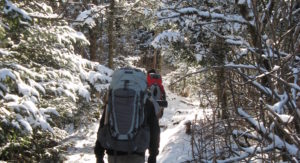 In the summer after eighth grade I went on a six-week bus trip around the United States with 35 other boys from my club. In addition there were nine men who supervised us.

We camped out each night. Each morning started out with a two-mile run led by one of the leaders. We ran at a pretty good pace as I recall.

When we came to the Grand Canyon, the leaders decided we would run down the trail to the bottom of the Grand Canyon and then run back up. Of course, that is much tougher than our daily two-mile runs.

While discussing how to decide who could go on this strenuous run, the leaders remembered Mount Baden Powell. This was a mountain near a camp we went to from time to time. I had been a few years before. We hiked up the mountain on a series of switchbacks. After about 5 hours of hiking, we came to the base of the summit. The final climb would only take about 15 minutes, but it was steep and it would be strenuous.

I was standing with some boys who decided not to go. “What’s the point?” one said. “We already climbed the mountain. Besides, I’d rather relax here.”

I was tired and I decided to stay with these boys. I did not finish the climb.

At the Grand Canyon the leaders decided to make Mount Baden Powell the deciding factor. Since I had not finished the climb, I was excluded from the run down into the Canyon.

I was very disappointed. I begged to be able to go. After all, I was one of the best, if not the best, runners among the boys on our daily runs. But the decision had been made. I had not endured then and thus I was disqualified now.

From time to time I find myself thinking back on that experience. It reminds me about the importance of enduring to the very end.

When Sharon and I first started attending Victor Street Bible Chapel in 1992, I held the view that the Lord Jesus would determine who would rule with Him based on the overall quality of the believer’s service for Him. Thus I thought that if someone served faithfully for 49 years and then fell away from the Lord in the 50th year and died out of fellowship with God, then he would still rule.

I remember that Zane Hodges and Luis Rodriguez challenged me on that point. They said that the Scriptures are clear that only if we endure to the end will we rule with Christ: “If we endure, we shall also reign with Him. If we deny Him, He will also deny us” (2 Tim 2:12). Endurance is necessary to win the Lord’s approval at the Bema: “I discipline my body and bring it into subjection, lest, when I have preached to others, I myself should become disqualified [literally, disapproved]” (1 Cor 9:27). I came to see that I was wrong. God cares how we finish. We must endure to reign.

It was the lesson of Mount Baden Powell all over again.

Thus while our eternal destiny is secure no matter what, our potential share in Christ’s future reign depends on us persevering to the spiritual summit. There is no retirement from confessing Christ. If we want to hear, “Well done, good servant” (Luke 19:17), then we must persevere to the end in our walks with Christ.