A friend called me just before 10AM today: “You’ve got to listen to Dr. Charles Stanley on his broadcast today. I want your feedback.”

I was interested to learn that Dr. Stanley spoke on repentance, the subject of my doctoral dissertation. I found his comments to be confusing, to say the least. Worst yet, Dr. Stanley, long known as a champion of the grace of God (e.g., see his book Eternal Security: Can You Be Sure?), here advocates Lordship Salvation.

The message only lasts for 19 minutes. I recommend you listen to it and then come back to my review of it. (Charles Stanley’s message may be found here.) The numbers in parentheses below indicate the time in the message, minutes and seconds, where he said something.

Here is his thesis: 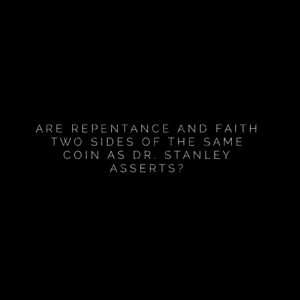 His entire message is based on flawed understandings of words and of Scripture. I could write a whole book refuting what he says in this 19 minute message. But I will spare you and just give you a few key observations/refutations.

I love Dr. Stanley’s book Eternal Security and I’ve enjoyed his preaching over the years. Sadly, I did not enjoy his message on repentance today. Today Dr. Stanley missed the mark.