Billy Graham went to be with the Lord he loved and served. Here is his final column (see the image below). I thought it was a good one until I read the last sentence.

At the beginning of the last paragraph, Graham explained he will be in heaven, not because of the works he did, but because he believed in Jesus:

If anyone could earn their way into heaven, it was Billy Graham. But he’s clear about this—he won’t be in heaven for all the ministry he did, or for trying to “live a good life.” No one will. Not me. Not you. You aren’t saved by works. Salvation is by faith apart from works (Gal 3:11; Eph 2:8-9; Titus 3:5). Amen!

And more than that, Graham is clear that eternal salvation is by a single act of faith that happens at a point in time (“Many years ago…”). That’s exactly right. It only takes a moment of faith to be born-again forever. At that instant, Jesus gives the believer eternal life (John 3:16, 36). Not temporary life. Not probation. Eternal life.

But then, in the last sentence of the same paragraph, Graham wrote this:

“Do you know you will go to heaven when you die? You can, by committing your life to Christ today” (emphasis added).

Is that what Graham meant?

Graham might have meant “committing your life” as a synonym for “faith apart from works,” but I guarantee you, that’s not what most people will hear. When they read that last sentence, they will understand that going to heaven depends on committing themselves in the sense of doing good deeds. But Graham just explained that was not the basis of salvation. He just wrote that all the ministry he so faithfully carried out was not the reason he would be in heaven. And yet, in that last sentence, he wrote that you can go to heaven if you commit.

Let me be clear: You are not eternally saved by committing yourself. You are eternally saved by faith, apart from your commitments, best efforts, and good works. Do you know what your commitments and good works are for? Helping out family, friends, and neighbors. But they are not for earning eternal life. Good works are for your neighbor, not for salvation.

Graham was right the first time—salvation is by faith, faith, and only faith.

I know some readers will think that it’s wrong to point out this simple contradiction in Graham’s column. They will interpret my discussion of the last paragraph as an all-out personal attack against the man and his entire ministry, which it isn’t. Thankfully, Graham was open to correction. In this very column, he admitted, “I’m sure I failed in many ways.” We all have. I certainly have.

That’s why you don’t go to heaven based on your commitments! We all fail in many ways. That’s why Jesus promised to give you eternal life by simply believing in Him, apart from works.

Even the best of us can fail to present the saving message clearly, and, sadly, Graham’s last column is an example of preaching a mixed message. It shows that even the most gifted communicators and evangelists can unintentionally be unclear in presenting the saving message. If Billy Graham can make that mistake, so can everyone. 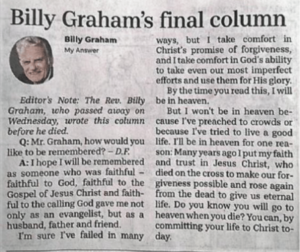