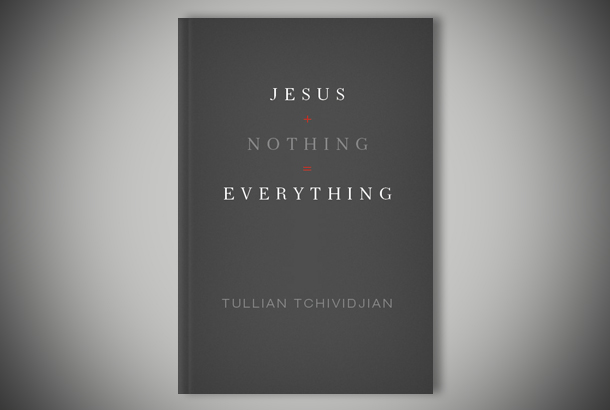 Tullian Tchividjian is Billy Graham’s grandson and the Senior Pastor of Coral Ridge Presbyterian Church. His book, Jesus + Nothing = Everything concerns the dangers of legalism and the importance of looking to Christ alone for our justification and sanctification.

The book grew out of the difficulties Tchividjian experienced when he became the Senior Pastor of Coral Ridge. Under the pressure of members calling for his dismissal, Tchividjian rediscovered the supremacy of Christ while reading through Paul’s epistle to the Colossians.

Tchividjian says that every person has desires that they seek to fill with things in the world (i.e., they seek for everything). But the world ultimately leaves us empty (i.e., with nothing). This is also true for those who seek to combine the Christian faith with some other cause, such as social justice, environmental concerns, social mobility, etc. The true fulfillment of these desires is for Christ to be our all in all (i.e., everything). Hence, the title, Jesus + Nothing = Everything.

Tchividjian explains that we must understand that through faith we are positionally in Christ. As such, Jesus is our righteousness, justification, sanctification, and everything else we could need.

Tchividjian makes excellent points about the centrality of justification, and makes the welcome suggestion that to be justified means being eternally secure: “To be justified means that you’re forever right with God, eternally in” (p. 139). He goes on to say, “Among many other things, this means that God’s acceptance of us cannot be gained by our successes nor forfeited by our failures” (p. 140). To say that justification makes us “forever right” and “eternally in,” and adding that it cannot be “forfeited,” surely suggests belief in eternal security, though he does not explicitly endorse that doctrine.

In keeping with these claims, Tchividjian is opposed to calls for obedience based on fear and guilt. Rather, we should be motivated by the assurance of being saved by God’s free grace. We should “obey from the secure basis of grace, not guilt” (p. 141). He adds, “It’s always the gospel of God’s free grace that should motivate our right doing; otherwise we’re nothing better than Pharisees, making sure we’re keeping all the rules, mainly because when we do, we feel better about ourselves—especially when we compare ourselves to those who aren’t doing right” (p. 153).

Tchividjian’s thoughts on sanctification are less helpful. People familiar with the Lutheran theologian Gerhard Forde (see Lazar, “Cheap Grace or Cheap Law? Dietrich Bonhoeffer and Gerhard Forde on the Nature of Law and Gospel,” in the Spring 2013 issue of the Journal of the Grace Evangelical Society) will immediately recognize his influence on Tchividjian’s views. Forde had an unusual view of sanctification. He believed that sanctification was “the art of getting used to justification” (Forde, Preached God, 226). Tchividjian seems to adopt the same perspective, such as when he writes, “the hard work of Christian growth consists primarily in being daily grasped by the fact that God’s love for us isn’t conditioned by anything we do or don’t do. Sanctification is the hard work of giving up on our efforts at self-justification” (p. 172). One does not make progress in the Christian life according to the normal standards of behavioral modification. Rather, one reaches Christian maturity by becoming more aware that eternal salvation is by faith apart from our works, because Christ’s finished work made it possible.

There is some truth in what Tchividjian says, especially given his contrast with behavioral modification approaches to sanctification. But Tchividjian seems too paralyzed by the fear of legalism to consider the proper role of works in the Christian life. And so he leaves out pivotal teachings about the role of eternal rewards (Rev 22:12), the law of sowing and reaping (Gal 6:7-8), divine discipline (Heb 12:6), and the need for abiding in fellowship with Christ (John 15:4). This may be because without a premillennial hermeneutic one cannot make sense of the warning and rewards passages in Scripture. But more generally, it may be because he travels in Reformed circles (he graduated from Reformed Theological Seminary and is ordained in the Presbyterian Church in America). Given the legalistic tendencies in Reformed thought (created especially by the doctrine of election), any talk of works will tend to distract away from Christ’s work, to the believer’s performance, in order to ascertain whether one is among the elect.

If Tchividjian were to adopt a Free Grace view—where the question of eternal destiny is settled at the moment of faith in Christ, while the question of eternal rewards remains open—then he could get to the real business of Christian living, and understanding that how we live has temporal and eternal consequences, without the pretense of thinking works save us or prove that we are saved.

In sum, while some of the book’s content comes across as filler, and while its main points could have been made in a third of the space, Tchividjian makes a valuable contribution to the radical freeness of the gospel promise. While he does not present a Free Grace perspective, his approach to justification and his attacks on legalism are complementary to our own, and that makes this book an edifying resource to be drawn upon in support of Free Grace arguments.