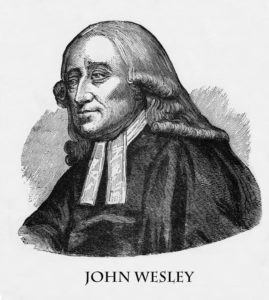 We believe in Free Grace Theology—which is distinct from Calvinism, Arminianism, Lutheranism, Thomism, and other -isms.

But where did the term “free grace” come from?

Historically, the expression “free grace” was used by both Calvinists and Arminians.

Arminans Have Used the Term

For example, John Wesley, the founder of Methodism, preached a sermon called “Free Grace” (Sermon 128, preached in 1740). Wesley was preaching against the Calvinistic theory of predestination. His point was that God’s offer of salvation was not based on any merit in man, but was free to all:

How freely does God love the world! While we were yet sinners, “Christ died for the ungodly.” While we were “dead in our sin,” God “spared not his own Son, but delivered him up for us all.” And how freely with him does he “give us all things!” Verily, free grace is all in all!

The grace or love of God, whence cometh our salvation, is free in all, and free for all.

First. It is free in all to whom it is given. It does not depend on any power or merit in man; no, not in any degree, neither in whole, nor in part. It does not in anywise depend either on the good works or righteousness of the receiver; not on anything he has done, or anything he is. It does not depend on his endeavors. It does not depend on his good tempers, or good desires, or good purposes and intentions; for all these flow from the free grace of God; they are the streams only, not the fountain. They are the fruits of free grace, and not the root. They are not the cause, but the effects of it. Whatsoever good is in man, or is done by man, God is the author and doer of it. Thus is his grace free in all; that is, no way depending on any power or merit in man, but on God alone, who freely gave us his own Son, and “with him freely giveth us all things” (emphasis added).

Calvinists Have Used the Term

But Calvinists have used the term, too. Charles Spurgeon preached a sermon with that title (#233). I think that, for him, “free grace” was another way to say “unconditional election.” We’re not only unable to merit salvation—we’re also unable to respond in faith to the gospel without God’s free grace electing us.

Besides Spurgeon, I have copies of a periodical called The Free Grace Broadcaster which republishes sermons by Calvinists.

So, both Arminians and Calvinists have used the term free grace, and meant different things by it.

I don’t think the expression free grace was adopted from either Wesleyans or Calvinists. Not directly. Instead, I think it was adopted in response to claims that the faith alone message amounted to cheap grace. 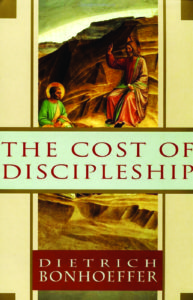 Dietrich Bonhoeffer spoke about the danger of cheap grace in his book The Cost of Discipleship. Only, Bonhoeffer wasn’t talking about the Free Grace position. Instead, he wrote in the context of the rise of National Socialism in Germany where the State churches enthusiastically supported the Nazis. Bonhoeffer was complaining about Lutheran priests granting sacramental forgiveness to churchgoers who were active Nazis, or supporters of National Socialism. The people would sin, superficially confess their sins at church, be sacramentally “forgiven,” and then go on sinning without any church discipline or real effort to be a Christian disciple. For Bonhoeffer, that system was full of cheap grace: “Cheap grace is the deadly enemy of our Church,” he wrote. “We are fighting today for costly grace.”

As Bonhoeffer’s books were read by Evangelicals worried about a lack of discipleship and discipline in the modern American church, the language of cheap grace was applied to those of us who believe in sola fide, i.e., that the only condition to be born again is to believe in Jesus for eternal salvation (John 3:16), and that salvation and discipleship are separate issues.

Calling our position cheap grace misses the point. After all, saying that grace is cheap implies it still costs something. But we’re not saying eternal life costs us just a little bit (i.e., that it’s cheap)—we’re saying that eternal life is free:

For by grace you have been saved through faith, and that not of yourselves; it is the gift of God… (Eph 2:8).

Hence, instead of preaching cheap grace or costly grace, we preach free grace.

I saw one of the most beautiful scenes of my life when I was 19 years old. I was sitting in the living room of...
December 1, 2022

Book of Ruth–Background–Prologue–Episode One, Scene 1

Welcome to Grace in Focus radio. Today, we begin looking at the Old Testament Story of Ruth. You will love how guest Philippe Sterling breaks...