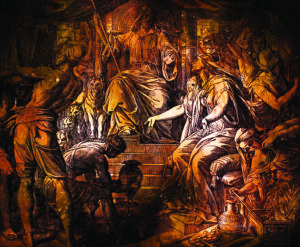 Ecclesiastes in a Syllogism

As I was making lunch, my son, Zane, came into the kitchen and asked, “Has it been an hour yet?”

“An hour from when?”

“From now? I’ll have to start counting.”

“Well, if it’s an hour from later, then it hasn’t happened yet, because it’s now, not later.”

I couldn’t give Zane a proper answer until I could understand his question! (He wanted to know if his sister had to get off the computer and play with him.) Sometimes an answer won’t make sense unless you know the question first. Which brings me to Ecclesiastes. What purpose does that book serve in the Bible? Peter Kreeft suggested this:

Ecclesiastes is the question.

So what’s the question?

That is, what is Solomon’s basic argument in Ecclesiastes?

I think you can put it in the form of a simple syllogism.

Is Solomon right? Is everything we do vain?

If his conclusion stands, it would be a devastating blow to anyone or to any philosophy, religion, or worldview that has tried to seek meaning “under the sun.” Materialism, hedonism, Marxism, existentialism, pragmatism, agnosticism, pantheism, paganism, etc—Ecclesiastes would be a reductio ad absurdum challenge to them all.

But it would also be a challenge to Christians to explain why our lives aren’t ultimately vain, too. After all, the Bible says it is all vanity, doesn’t it?

Is there any hope for us?

Ecclesiastes explores and defends the second premise of the syllogism. Solomon will recount all the different ways he looked for meaning under the sun and explain why they all failed to satisfy. Understanding where Solomon failed to find meaning may help us understand today’s culture. People are looking everywhere under the sun for meaning—and they have relatively fewer opportunities and resources than Solomon had for conducting the experiment.

If Solomon can show that meaningfulness and purpose do not come from under the sun—if everything (that he has tried) really amounts to vanity—that raises one of the biggest questions of all: if you can’t find meaning under the sun, where can you find it?

The teacher in Ecclesiastes was on a search for the meaning of life “under the sun,” but all his attempts to find meaning failed.

None of his desires could be satisfied (Eccl 1:8); nothing he did made a difference to the world, which just kept on going eternally, as if humanity didn’t exist (Eccl 1:4, 9); nothing he did would be remembered (Eccl 2:16), and finally, anything he could accomplish would end with death, the same as any other man (Eccl 9:2-3). So why bother laboring under the sun? Why put in the effort? As Solomon asked:

What profit has a man from all his labor In which he toils under the sun? (Eccl 1:3).

Or at least, it seemed meaningless…if you evaluated things from a merely human perspective.

That’s the key to Ecclesiastes. It is a reductio ad absurdum for a merely earthly point of view. As the rest of the Bible teaches—there is a reality above and beyond the sun. And that is the answer to Solomon’s question—our longing for eternity can only be answered by eternity (Eccl 3:11). More specifically, I want to suggest that the Biblical doctrine of eternal rewards, especially the reward of ruling with Christ, answers Solomon’s quest for meaning.

Too few churches teach that eternal life is a free gift, given through faith, apart from works (cf. John 3:16; Gal 2:16; Eph 2:8-9), and even fewer teach that Jesus will also reward believers based on their faithfulness, endurance, overcoming, and works (cf. Luke 19:17; 2 Tim 2:12; Rev 3:21; 22:12). But eternal rewards are the answer to Solomon’s pessimism! Consider four facts about eternal rewards which show that laboring under the sun is worthwhile:

Every good deed you do—down to giving a single cup of water—will be remembered (Matt 10:42).

Yes, in history, people will forget what you’ve done. But in eternity, God does not. On the contrary, everything you have done, whether good or bad, will be remembered and rewarded accordingly at the Judgment Seat of Christ (1 Cor 3:11-15).

Your rewards will outlast the present earth (Rev 21:1). Solomon thought that the generations come and go but that the earth was eternal (Eccl 1:4). But the earth only seems that way from the limited perspective of being “under the sun.” On the contrary, from a divine perspective, the present earth will pass away (2 Pet 3:10), while anyone who believes in Jesus will never perish (John 3:16). And the rewards they receive for their works will be eternal, too (1 Cor 9:25). Your rewards will outlast death (Rev 20:6,14). Contra Ecclesiastes, death is not the end. In fact, there will be an end to death when it is cast into the lake of fire. Believers will be resurrected from the dead and have already passed from death into life (John 5:24; 11:25).

Your rewards will affect your status in the kingdom into eternity (cf. 1 Cor 9:25; 2 Tim 2:12; Rev 21:24). What you have done may have negligible effects now and may seem futile, but be sure they will have eternal consequences. Your faithfulness now will help determine your position in the kingdom for all eternity.

Solomon asked what profit has a man from his labor done under the sun. For the believer who has been faithful, the profit is eternal.

Shawn Lazar is Director of Publications for Grace Evangelical Society, which he finds very meaningful work!