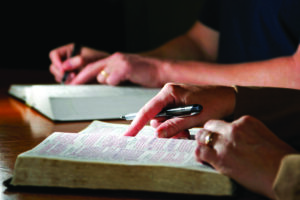 Across the globe, these last few months have given most people a precious gift: time. Time for family and relaxation, sure, but hopefully you’ve also taken the opportunity to spend extra time in prayer and in the Word. The pressure has been off to get kids on the bus or rush off to a morning church meeting, allowing a few extra moments to linger in the passage you’re reading, make a few notes, or follow the references. One of my favorite things to write in my Bible are question marks. There is so much I still don’t fully understand, and those question marks are like invitations to return and study and meditate on a passage or pray for insight. I’ve returned to some of my question marks these last few months—what I’m calling “passages to ponder.” I’m sure you have your own, or perhaps you have clarity on these passages that I don’t have! Either way, my invitation to you is to use this unique time in history to engage in those tougher texts, the ones you struggle with, are mesmerized by, don’t understand, or frankly, don’t like. You don’t have to like a passage to obey it! But the Holy Spirit, I believe, will meet you in the pages as you seek to know Him better because Heb 11:6 promises that “God will reward those who earnestly seek him.”

1. Jesus’ prayer in the Garden of Gethsemane (Matthew 26). I have so many questions about this passage! First, I’m struck by the fact that this could be an unanswered prayer request by Jesus. “Father, if it is possible, may this cup be taken from me” (Matt 26:39). Why did Jesus ask that this cup be taken from Him?1 What would have happened if God the Father had honored Jesus’ request? What exactly is the “cup”—the physical suffering of the cross? The spiritual weight of the sins of the world? The agony of separation from the Father?

For me, the Garden prayer is the most haunting part of the crucifixion story. Jesus is mostly silent after He’s arrested. We see a willing Savior who accepts brutality and death on our behalf. But it appears here that Jesus had a choice to make in the matter, and He was agonizing over it in the Garden. His humanity is so clearly seen here: He is in anguish! Scripture gives us an interesting little description: it tells us Jesus was in so much distress, He was sweating profusely—so much so that it was dripping from His body the way a fresh cut drips blood. This makes me love Jesus even more. He knew His destiny, but He had a choice. He was wrestling with His very human body and mind that night, and love won.

2. The spiritual battle in Daniel (Daniel 10). This is a fascinating passage where a spiritual being practically apologizes to Daniel for being late in responding to Daniel’s prayers because he was detained by a demon!

“But the prince of the Persian kingdom resisted me twenty-one days. Then Michael, one of the chief princes, came to help me, because I was detained there with the king of Persia. Now I have come to explain to you what will happen to your people in the future…” (vv 13-14).

A few verses later, the “one who looked like a man” parted with these words,

We have a glimpse into the supernatural world that most of us don’t spend time contemplating. While there are different interpretations, the passage seems to depict godly and demonic angelic warfare. Some of the bad ones are very powerful, so powerful that at times reinforcements need to be called in for help! This passage brings up so many questions. The spiritual beings in Persia and Greece appear to have had geographical domain; do demons still have that today? What is the hierarchical system among the angels (holy and unholy), since here we see a prince, another prince, a chief prince and a king? What role do they play in the lives of believers today? While Scripture is clear we are not to worship or pray to angels, there are many other passages worth pondering that discuss their roles in the lives of believers and in the world (Ps 91:11-12; Matt 18:10; Heb 1:14).

3. Peace during the millennial kingdom (Isaiah 11). If it’s been a while, stop reading this article and read Isaiah 11. Especially in this time of political and social unrest across our nation, it reads almost like a fairy tale—righteous rulings, hope for the needy, just punishments for the wicked, and then the world is so set right that even the animals have peace with one another! “The wolf will live with the lamb, the leopard will lie down with the goat” (v 6). And then (for mothers), the most striking picture: “The infant will play near the cobra’s den, and the young child will put its hand into the viper’s nest” (v 8). What does that picture do to you? Does it sound too good to be true? Does it make you fearful? Do you long for that kind of peace? I mean really long for it? That kind of justice? Isaiah gives the reason for this peace in the world in v 9: “For the earth will be filled with the knowledge of the Lord as the waters cover the sea.” Just as surely as salty water fills up the oceans, the knowledge of the Lord will literally transform the world. Take some time and imagine the world when Jesus rules. It is coming!

4. God’s intimate knowledge of you (Psalm 139). I’m currently memorizing this psalm with a friend. I’ve written about the benefits of Scripture memory before, but it’s been a while since I tackled a whole chapter. If you’re looking for a passage to work on, may I suggest Psalm 139! I’ve had a lot of time to “ponder” it, and it keeps getting richer and more meaningful. Verse 1 begins: “You have searched me, O Lord, and you know me.” You could stay a while just with v 1. God, Creator of the universe, has searched me, and He knows me. David gives us some details, then he sums it up at the end of v 3 with, “You are familiar with all my ways.” I find so much comfort in this. God is familiar with my favorite running route. He’s familiar with my tendency to stop at garage sales and buy books I don’t need. He’s familiar with the times I say I’m going to get out of bed and the time I actually get out of bed. God sees the big picture, and He sees the details. If you struggle with anxiety about the future or guilt from the past, Psalm 139 helps the reader acknowledge God’s sovereignty: “All the days ordained for me were written in your book before one of them came to be” (v 16). Take some time to read through, pray through, and meditate on God as reflected in this psalm. If I can confess, I always enjoyed this psalm up until the “slay the wicked” part. It seemed a bitter ending to a beautiful expression of God. But, the beauty of memorization is that it forces you to focus on each word in its progression. Just as above we talked about justice, you simply can’t acknowledge the beauty and goodness of God without an honest cry, “But the world is not as it should be!” David’s plea is that God, in His power and authority, would set the world right, that He would exercise justice like only He can. I’ve come to appreciate the “slay the wicked” parts of many of the psalms because they are an honest reflection of our heart’s desire for Jesus’ perfect rule, which you shall see in the next point.

5. Christ on a white horse (Revelation 19). I like the picture of Jesus in the Gospels. He was humble, loving, tender-hearted, and generous. He loved children, and He rebuked the hypocrites. He healed the outcasts and bucked religious authority. We see Jesus fired up when He clears the temple of the moneychangers, and we like that side of Him. Serves them right! We have grown so comfortable with our “suffering Savior” riding on a donkey, that we forget what is coming. Revelation 19 is coming, and He’s riding on a horse.

With justice he judges and wages war. His eyes are like blazing fire…He is dressed in a robe dipped in blood…Coming out of his mouth is a sharp sword with which to strike down the nations. ‘He will rule them with an iron scepter.’ He treads the winepress of the fury of the wrath of God Almighty (Rev 19:11-15).

Wow. How often do we hear Sunday sermons about that Jesus?

Yes, this book has a lot of imagery, but you can’t miss the picture: Jesus is fierce, and He’s a warrior. He will fight, and He will win. Now I love the picture of Jesus with little children on His lap as much as you do, but you can’t stop there. Our Lord that we worship is powerful, and the Day will come when a great battle will be fought with Jesus at the helm. To fully worship Jesus and see Him clearly, we need to spend time pondering the passages that describe Jesus as the mighty warrior to come.

Summer Stevens lives outside of Pittsburgh with her husband Nathanael and their five children.

1. Editor’s note: While this is the traditional interpretation of Jesus’s struggle in the Garden, for an alternative view, see John Niemelä, “Father, Take This Cup.” https://faithalone.org/grace-in-focus-articles/father-take-this-cup.