A pastor, a college professor, and a boy scout were flying together on a small plane when the pilot had a heart attack and died. Since none of them could fly the plane and it was headed down, they began looking for parachutes. They only found two. This created a moral dilemma: which two would jump to safety, and which one would ride the plane down to a certain death?

The college professor announced that since he was the world’s smartest man, he should take one of the parachutes. He then strapped one on his back and jumped out of the plane.

The pastor looked at the young scout, and told him he knew that when he died he would go to heaven. So the pastor insisted that the young man take the remaining chute and jump to safety.

The scout said that would not be necessary since the world’s smartest man just jumped out of the plane with his scout backpack!

More than sixty years ago, Winston Churchill quipped, “Men occasionally stumble over the truth, but most of them pick themselves up and hurry off as if nothing had happened.”1 That statement was made in a time when the concept of truth was not challenged. People then believed that some things were true, and therefore the opposite of that was false.

Almost twenty years ago, Professor Allen Bloom documented not only the dismissal of truth but also the death of truth on the college campus.

There is one thing a professor can be absolutely certain of: almost every student entering the university believes, or says they believe, that truth is relative. If this belief is put to the test, one can count on the students’ reaction: they will be uncomprehending. That anyone should regard the proposition as not selfevident astonishes them, as though he were calling into question 2+2=4.2

This relative view of truth is no small matter. As Francis Beckwith observes,

When truth dies, all of its subspecies, such as ethics perish with it. If truth cannot be known then the concept of moral truth becomes incoherent. Ethics become relative, right and wrong a matter of individual opinion. This may seem a moral victory, but ultimately rings hollow.3

Truly our culture is experiencing a breakdown of the rational and moral immune system, rendering our society weak and susceptible to all manner of insane and immoral practices.4

As serious as this virus is for our culture’s temporal future, it has even graver consequences for an individual’s eternal destiny. For if there is no truth, then nothing meaningful can be said about the life to come or if there is even one. But if there is truth to be discovered, not created, then one has the potential of being certain about not only how to live life here, but where her or she might spend his or her eternal life. 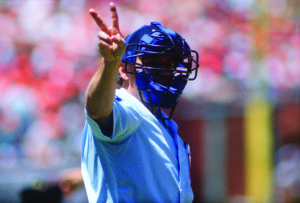 There is much confusion surrounding the nature of truth. The following illustration from Os Guiness points out three differing approaches or views of truth. Three baseball umpires debate their different philosophies of umpiring…

“There’s balls and there’s strikes.” Says the first, “and I call them the way they are.”

“No!” exclaims the second umpire. “That’s arrogant. There’s balls and strikes and I call them the way I see them.”

“That’s no better,” says the third. “Why beat around the bush? Why not be realistic about what we do? There’s balls and strikes and they ain’t nothing til I call them.”

The first umpire represents the traditional view of truth—objective, independent of the mind of the knower, and there to be discovered. The second umpire speaks for moderate relativism—truth “as each person sees it” according to his or her perspective and interpretation. And the third umpire bluntly expresses the radically relativist, or postmodern, “truth” is not there to be discovered; it is for each of us to create for ourselves.5

As Norman Geisler explains, there are at least four reasons for adopting this view:

Second, even lies are impossible without a correspondence view of truth. If one’s statements need not correspond to the facts in order to be true, then any factually incorrect statement could be true. If this is the case, then even lies become impossible, for if any statement is compatible with any given state of affairs, then all statements can be true and none false.

Third, without correspondence there could be no such thing as truth or falsity. In order to know something is true as opposed to something that is false, there must be a real difference between things and the statements about the things. But this real difference between thought and things is precisely what is entailed in a correspondence view of truth.

So truth is that which corresponds to reality.

Now that we have defined truth, we must examine three critical aspects or propositions concerning truth.

1. Truth is logical. What I mean by this is truth conforms to the laws of logic. These “Laws” form the very basis of all rational thought. They are also referred to as “First Principles.”7 One of those principles is called the “law of non-contradiction.”

First principles or self-evident principles are undeniable. “For example, the principle of non-contradiction cannot be denied without using it in the very denial. The statement: ‘Opposites cannot be true’ assumes that the opposite of that statement cannot be true.”8

However people still ignorantly violate these principles. For instance, I was talking to a friend and made the following statement: “Either Christianity is true, or Buddhism is true, but both cannot be true in the same way at the same time.” He responded, “You cannot be that logical when it comes to spiritual issues.” I pointed out to him that he had used logic to disavow logic.

A children’s story aptly illustrates this principle. It is a dialogue in Winnie the Pooh when he came upon Rabbit’s house.

So he bent down, put his head into the hole, and called out: “Is anybody home?”

There was a sudden scuffling noise from inside the hole, and then silence.

“What I said was, ‘Is anybody home?’” called out Pooh very loudly.

“No!” said a voice; and then added, “You needn’t shout so loud. I heard you the first time.”

“Bother!” said Pooh. “Isn’t there anybody here at all?”

Winnie-the-Pooh took his head out of the hole, and thought for a little, and he thought to himself, “There must be somebody there, because somebody must have said ‘Nobody.’”9

This proposition is important not only to fairy tales but also spiritual truths. For instance, either God exists, or He does not exist. He cannot both exist and not exist. Or either the Bible is true, or it is false. Or there is life after death, or there is not life or existence after death.

But aren’t some things true for some people but not for others? Or true at some times but not others? No, for truth is universal—that is, it applies to all people at all times.

I was speaking with a friend and made the following statement: “If something is true for me then it is true for you.” He disagreed, offering the following common situation as a rebuttal. He said that if you came over to his house this evening and asked his wife if she was cold, she would say she was. But if you were to ask him if he were cold, he would say no, in fact he was hot. So it is both hot and cold. Or is it?

3. Truth is Knowable. The final proposition about truth is that it is knowable. There are some today who would claim you couldn’t know anything to be true. This is skepticism. And as Winifried Corduan has explained, skepticism is a position that cannot be rationally maintained.

So we can know the following: truth corresponds to reality. And truth is logical, universal, and knowable.