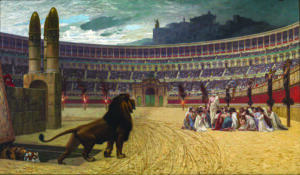 Calvinists believe that Rom 8:28-30 supports the doctrine of election and predestination. This would mean that God determines all who go to heaven before they are even born. But is that the most accurate interpretation of this passage? Does this passage have anything to do with the receiving of eternal life? It does not.

What Does “All Things” Mean?

Paul has just finished comparing people with creation in vv 19-23. All of creation groans and is going through birth pangs (v 22). Creation is waiting for deliverance. In v 17, Paul says that Christians can be joint-heirs with Christ if they suffer with Him. Those Christians will be rewarded with an inheritance in the kingdom, but this inheritance is not the result of sinful actions. On the contrary, trials, sufferings, and striving against the flesh are birth pangs for the believer. So the suffering believer also waits for deliverance.

Zane Hodges, in his commentary Romans: Deliverance from Wrath, takes a view very similar to mine. He says it better than I do, so a quote would be appropriate:

From Paul’s perspective, as we suffer, our groanings are part of the larger travail of “the whole creation” which “groans together and suffers labor pains together right up until now” (v 22). But this groaning and this travail of the whole creation are in symphony with our own, since not only does the creation do it, “but also we who have the first fruits of the Spirit” do it too (v 23). The creation is waiting as we are for the “birth” of the new age which will bring freedom from corruption both to us and to the natural world (v 21). This freedom from sin and death, of course, is the ultimate good. In this experience, all things (panta) work together with our own experience toward the same splendid goal, the age to come. Both creation’s groanings, and ours, are “labor pains” (v 22) that occur together and are full of “hope” (vv 20, 24-25). This shared experience is goal-oriented toward the good of the age to come (Hodges, Romans, p. 236).

So, the “all things” refers to the godly fighting through trials, sufferings, and striving against the flesh—that is what works together for good tothem that love God and are called according to his purpose.

Paul is saying that the struggles of creation and the struggles of a particular group of people work together, or co-operate, for good. This group is “those who love God, and those who are called according to his purpose” (8:28). This does not refer to just any Christian, or to all Christians, but to faithful Christians who are battling the carnal flesh and the sufferings that accompany a godly life. It is these believers who truly love God (John 14:15).

What is the “good” that such an experience brings about? We find the answer in v 29. It is being “conformed to the image of his Son.” A godly Christian, who suffers with Christ, is being made in the likeness of Jesus. Such Christians are groaning with creation, waiting for the return of Christ.

Keeping in mind that the “good” is the conforming of godly Christians into the image of Christ, Paul says that these Christians were foreknown. This foreknowledge was not merely that God knew who would accept the gospel invitation and believe, but He knew who would suffer with Christ and be conformed into that image. We see this foreknowledge in Jer 1:5. Jeremiah was foreknown of God to be His prophet and to undergo some of the struggles he endured in his life for God’s glory, and to share in suffering.

They Are Also Called

This group of believers whom God had predestinated, He called and led to these choices. This calling is specific to this group of faithful Christians in the same way Jeremiah was called. Sometimes God calls us to share in the sufferings of Jesus in this life, and I believe it is this type of call that Paul has in mind. It is a call to suffering, not an effectual call or an unconditional election to eternal salvation. Those who are called are justified in their godly actions. They live godly lives, and at the Judgment Seat of Christ, they will be vindicated and judged as having lived righteously. This will lead to their glorification, namely the receiving of glory because of the godly lives they lived through suffering. This will result in future rewards in the kingdom, including the promise of joint-heirship with Christ (Rom 8:17).

When it comes to Christian suffering, Paul reveals that such suffering shouldn’t be seen as being forsaken by God. Rather the ability to share in Jesus’ suffering gives the believer the opportunity to be able share in the glory of Christ’s coming reign. These sufferings are mere birth pangs of the future deliverance from the bondage and corruption that the entire creation faces.

So, what does Rom 8:28-30 mean? There is a specific group of Christians that are called to share in the sufferings of Christ (Acts 9:16). Though they suffer, they have been called to enter into this suffering, which is making them more like Christ. They will be blessed in future rewards and joint-heirship with Jesus Christ. In the midst of the sufferings and trials, God has not left them but called them to share in this precious privilege. God is not absent but fully vested in them, and no matter what, He loves them, and nothing will separate them from His care.

Nowhere in this passage is there any indication that this is an unconditional election unto eternal life by God. Such an idea is not found in the broader context, either. From Romans 5 through Romans 8, Paul is talking about walking by the Holy Spirit and living the Christian life in a way that pleases God. While God indeed loves all believers, Rom 8:28-30 is talking about the love of God directed towards those Christians who share in the sufferings of Christ faithfully, as well as God’s promises for the blessings these believers will have in the future as a result of that suffering.