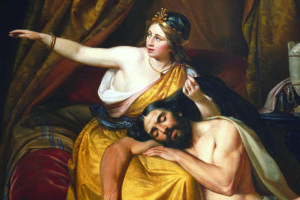 Rob Lowe, the former teenage heartthrob who knows a thing or two about skeletons coming out of the closet, had this to say about the perils of being famous in America: “Anyone who’s lived their life to the fullest extent has a scandal buried somewhere. And anybody who doesn’t have a scandal I have no interest in meeting…You show me somebody who’s led a perfect life, I’ll show you a dullard.”

Samson was no dullard. His life was far from perfect. And he didn’t bury his scandals at all. Everything he did, he did in the open.

In fact, Samson had enough skeletons to fill two closets and enough dirty linen to keep a laundromat going 24 hours a day. He should have been a godly man…but he wasn’t. He shouldn’t have been in Hebrews 11…but he was.

Samson was a he-man with a she-weakness. And his life illustrates a temptation that many Christians face today.

Lookin’ For Love In All the Wrong Places

In the East, parents did, and often still do, negotiate the marriage alliances for their sons.

During that period, the Philistine invaders had settled in the towns, and the dealings between them and the Israelites was often of such a friendly and familiar nature that it resulted in marriage.

Then his father and mother said to him, “Is there no woman among the daughters of your brethren, or among all my people, that you must go and get a wife from the uncircumcised Philistines?” And Samson said to his father, “Get her for me, for she pleases me well” (Judg 14:3).

She pleases me well—literally, “she is right in mine eyes.” Not by her beautiful countenance, or by her handsome figure, but right or fit for his purpose. And this throws light on the historian’s remark in reference to the resistance of his parents:

But his father and mother did not know that it was of the Lord—that He was seeking an occasion to move against the Philistines (Judg 14:4a).

The Lord was about to destroy the Philistine power. And the means which He meant to use would not be the power of a large army (as was the case of the preceding Judges), but the miraculous prowess of the single champion of Israel.

In these circumstances, the provocation to hostilities could only spring out of a private quarrel, and Samson’s marriage to a Philistine girl was doubtless suggested by the secret influence of the Spirit as the best way of accomplishing the intended result.

The Danger of Falling in Love

When Samson desired to marry a woman in Timnah, what he really cared about was how things looked to himself, not how they looked to the Lord.

“Love at first sight” is a powerful but dangerous thing. Why? Because it is entirely possible for us to fall in love with someone that we have no business falling in love with—which was exactlythe case with Samson here.

Moreover, “love at first sight” may feel wonderful, but it doesn’t last in its initial form. We can be attracted more to the feeling of love itself than to the person whom we focus upon. And while we can love someone at first sight, we don’t really know him or her at first sight.

In Love with the Wrong Person

It is possible to fall in love with someone who is actually very wrong for us. This is why Prov 4:23 says:

Keep [literally, guard or protect] your heart with all diligence, for out of it spring the issues of life.

If we don’t guard our hearts, we can end up in trouble. So, “Above all else, guard your heart.”

If we find that we are already in love with the wrong person, the only thing to do is to give up that person, because that is right before God. After all, Jesus told us that following Him would require that we give up the things we love most (Mark 10:29-30).

Often we have a list of what we want in a spouse. But that list could have just one quality on it, namely, not how shapely or how sharp he or she is, but does he or she love Jesus Christ?

After that, be the right person. That matters more.

Wanting what God Has Forbidden

In demanding a Philistine wife, Samson showed a sinful disregard for his parents and for God’s will (cf. Deut 7:3-4). Bound by romantic feelings, there are many people who still “demand” of God a mate out of God’s will. But the command that forbade the Israelites to intermarry with the pagan nations around them applies to the Christian today—a Christian must not marry someone who is not a Christian:

Do not be unequally yoked together with unbelievers. For what fellowship has righteousness with lawlessness? And what communion has light with darkness? (2 Cor 6:14).

It isn’t because non-Christians are not lovable. Sometimes they are more lovable than believers.

Nor is it because they aren’t good enough or aren’t worthy of our love.

In fact, the whole philosophy of dating needs to be re-examined by Christians. Dating often teaches people more about how to break up and how to endure the pain of a broken heart than it does about building a lasting, enduring relationship.

Additionally, believers are advised to carefully discern if the Christian commitment of the person they are interested in dating is genuine. There have been many pretended conversions, calculated to merely entice a Christian to marriage.

When You’re Married to an Unbeliever

If someone goes against God’s plan and marries an unbeliever, or if one spouse becomes a Christian before the other one does, there are specific commands applying to those situations.

The Apostle Paul clearly wrote that this one must do all that is possible to stay in the marriage, and be the best spouse you can be (see 1 Cor 7:10-16).

Allowing Is Not the Same as Approving

God used Samson’s marriage for His purposes. In accomplishing that purpose, God did not make a reluctant Samson pursue the Philistine woman for marriage. Rather, God allowed Samson to do what he wanted to do, though the act itself was sinful. God allowed it both for reasons in Samson’s life and for reasons on a larger scale. God did use Samson mightily, but God used him despite his sin, not because of it.

Today, someone might justify his desire to marry a non-Christian because he trusts some good will come out of it—such as his non-Christian partner eventually coming to Jesus. Things could work out that way. But don’t forget, even though God used Samson’s marriage to a Philistine woman, it all came at a great personal cost to him (ending in his enslavement and death!).

No matter how much good God can bring out of the bad things we do, He can always bring far more good out of our obedience. And we ourselves experience much less pain.