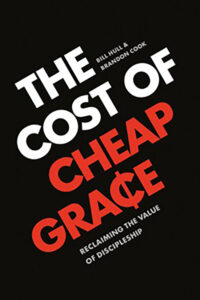 I’ve read a lot of books on discipleship, and The Cost of Cheap Grace: Reclaiming the Value of Discipleship, by Bill Hull and Brandon Cook, was one that I found myself disagreeing with, and frustrated by, more than any other book I have read on the subject.

That is not to say the book was all bad. There were some good moments. I loved the authors’ passion for promoting discipleship in the church. I wish there was more discipleship in every church in the world, especially my own. The church is to be about the business of making disciples as The Cost of Cheap Grace emphasizes throughout.

At the same time, from the title of the book to their interpretation of the Parable of the Four Soils at the conclusion of the book, I was banging my head in frustration over the views of the writers.

My issues with this book stem from one major problem: the authors’ consistent need to combine salvation and discipleship into one process, with the corresponding view that all who separate the two cheapen grace. They write, “Isn’t it obvious that Jesus equated belief with action, that faith is following, and that faith is only real in obedience—otherwise, it is not faith at all?”

I’m sorry, but that is not obvious, because Jesus never equated belief with action.

When we study the example of Abraham, we see that to believe is to be convinced of God’s promise (cf. Rom 4:21). Abraham believed God would provide him a son in his old age, and God counted this belief as righteousness (Gen 15:6; Rom 4:22). God didn’t count Abraham’s obedience as righteousness, but his faith.

I know that illustration is from Paul in Romans, but when Jesus presented the saving message throughout the Gospel of John, He presented faith the same way as Paul. Jesus told Nicodemus, the woman at the well, the Jews seeking to persecute him for healing on the Sabbath, the crowds who followed him after the feeding of the 5,000, Martha the sister of Lazarus, and the man born blind, to believe in Him for eternal life.

Jesus never followed the offer of eternal life with an asterisk, e.g., “If you don’t become My disciple, it means you didn’t really believe My offer for eternal life.”

Salvation and discipleship are two different subjects. While they are both eternally significant, they are different responses to Jesus. To mix them adds works to grace and, in my view, actually cheapens grace by putting a price on what should be the priceless gift of salvation.

The price Hull and Cook set on eternal life is a lifetime of discipleship. While that is a high price, it still falls woefully short of the value of the life offered by Christ.

I also found the authors to have a shockingly shallow view of church history. They kept attacking the American church as if we invented some new, never before seen deficiencies among the people of God with statements like the following: “This distinctly American plan of salvation has replaced the metanarrative of Scripture, from creation to consummation, with a new category of Christianity: a technical salvation, conversion event. It has also left in its wake millions of nominal Christians who can be counted but can’t be counted on.”

On the contrary, this is not a new problem. Medieval church history suffered from the dangers of nominal Christianity, too, when people were baptized into a church at birth because they were born in a specific region.

Yes, we have problems with nominal Christianity in America, just as they did in the early church. But in comparison to the medieval church, we have not fallen to past levels.

Their whole section on Biblical paradoxes was also tough to read because they made many simple truths out to be paradoxes when they aren’t. “Indeed, in Scripture, faith and works are in tension, a paradox, a both/and held together by the saving work of Jesus on our behalf.” I don’t see any tension between faith and works in the Bible. They fit together simply and easily. We believe in the promises of God for eternal life based on the completed work of Christ. We work in order to maintain a healthy fellowship with God and to earn rewards for eternity. They go together rather nicely. The new birth, which comes by faith, places us into the family. Works determine our fellowship and joy in the family.

I applaud Hull and Cook’s passion for discipleship. I think we need a strong, robust emphasis on discipleship in the church, and we should always be striving to help one another along the path to discipleship. However, this passion should never crush the message of salvation by grace through faith. You can hold fast to a saving message based on faith alone, in Christ alone, apart from works, and still call Christians to discipleship. Jesus did both. He freely offered eternal life (e.g., John 3:16) and also called people to sacrifice in the work of discipleship (e.g., Matt 16:24). But do not mix the two responses.

I can’t in good conscience recommend The Cost of Cheap Grace in spite of the importance of discipleship and a need for increased discipleship today. I believe that a gospel of salvation by works, even when that work is discipleship to Christ, cheapens the priceless gospel of Jesus Christ. Eternal salvation can only be received by faith.

Shawn Willson is the pastor of Grace Community Bible Church. He lives in River Ridge, LA with his lovely wife Jennifer and their four loud children. You can see more of his reviews at Rev Reads on YouTube.