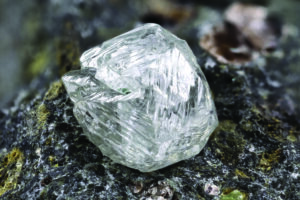 In Rev 2:17 Jesus promises to give to the overcoming believers at Pergamos a white stone. This is clearly a reward for faithfulness. It is a reward that will be given at the Judgment Seat of Christ, when the Lord rewards believers for their obedience.

I have often wondered what this reward will mean for the believer. I have heard different suggestions. Will it mean that the faithful believer will have a ticket to go to certain events? Will it mean he will have a place of honor in certain venues? Will it be like a medal given to a hero on the battlefield by which others will see and recognize that he was a faithful disciple?

As I have thought about this white stone, I have always looked at it as something that will give special privileges to the person who has it. My guess is that it is correct to see it that way.

However, just this week a friend of mine made me look at it in a different way. My friend was a gemologist during his working years. He owned a jewelry store. He said that when he sees the words “white stone,” he thinks of a pure diamond. A diamond has a numerical rating from 0 to 10. The less color it has in it, the closer it has to a rating of zero. A zero is a perfect diamond with no color. It is a white diamond. As I understand it, a perfect zero does not exist.

Years ago, he wanted to give his wife a special gift. He wanted to find a diamond as close to a zero as he could find. He found one with a rating of .3. It was a special gem and one that was very expensive.

He gave it to his wife on that special occasion. Being married for many years, she knew the special character of that gem. She knew that her husband had gone out of his way to give her this stone. She knew he wanted to give her something very special.

But there was something else about that gem. She knew that her husband had great joy in giving it to her. Every time she wore it, she was reminded of how he loved her. She knew that it had come from her husband who wanted to honor her.

In other words, this gem was valuable to her because of the one who gave it to her. It was valuable because it showed what he thought of her. He found her worthy of this gem.

Don’t you think that it will be like that with those who receive this white stone at the Judgment Seat of Christ? John tells us that the stone will have a new name on it. The believers who receive it will know that the Lord thought they were worthy of it. They will know that He received great joy in giving it to them. The fact that it came from Him will make it of infinite value.

I usually don’t look at rewards that way. The white stone will come from Him! I don’t know what having that white stone will do for the believer in the kingdom. But I am sure that for those who have it, the fact that the King gave it to them will make it the greatest accessory of their wardrobe.