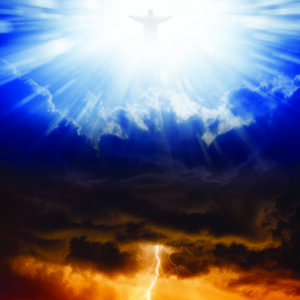 Everyone who has read the Bible carefully recognizes that God promises that at the end of the age, He is going to judge everyone according to his works. Eschatological judgment will not be according to one’s faith. Works will be the issue.

A Sampling of Works Judgment Texts

Ecclesiastes 12:13-14. “Fear God and keep His commandments, for this is man’s all. For God will bring every work into judgment, including every secret thing, whether good or evil.”

Matthew 16:27. “For the Son of Man will come in the glory of His Father with His angels, and then He will reward each according to his works.”

Luke 19:15. “‘And so it was that when he returned, having received the kingdom, he then commanded these servants, to whom he had given the money, to be called to him, that he might know how much every man had gained by trading.’”

1 Corinthians 3:8. “Now he who plants and he who waters are one, and each one will receive his own reward according to his own labor.”

2 Corinthians 5:10. “For we must all appear before the judgment seat of Christ, that each one may receive the things done in the body, according to what he has done, whether good or bad.”

Galatians 6:7. “Do not be deceived, God is not mocked; for whatever a man sows, that he will also reap.”

James 3:1. “My brethren, let not many of you become teachers, knowing that we shall receive a stricter judgment.”

1 Peter 1:17. “And if you call on the Father, who without partiality judges according to each one’s work, conduct yourselves throughout the time of your stay here in fear…”

Revelation 22:12. “‘And behold, I am coming quickly, and My reward is with Me, to give to every one according to his work.’”

Many pastors and theologians speak of only one eschatological judgment, which they call the final judgment. In their view, the Judgment Seat of Christ (2 Cor 5:9-10) and the Great White Throne Judgment (Rev 20:11-15) are two different names for the same judgment. In this view everyone finds out his or her eternal destiny after this life is over when this final judgment takes
place.

I was one of four authors in a book put out by Zondervan called Four Views on the Role of Works at the Final Judgment. In response to my defense of the view stated in this article, Dr. Tom Schreiner wrote, “When I first encountered solutions like Wilkin proposes regarding the judgment, I found it impossible to remember in the judgment passages whether the judgment of believers or unbelievers was in view” (p. 52).

The Bible, however, distinguishes between two separate judgments, which we will now consider.

The Separate Judgments of Believers and Unbelievers

The eschatological judgment of believers is called the Judgment Seat of Christ. It will occur before the Millennium. (I am convinced that it will occur on earth after the Tribulation.

However, most Dispensationalists suggest that it will occur in the third heaven during the Tribulation.)

The eschatological judgment of unbelievers is called the Great White Throne Judgment. It will occur after the Millennium (Rev 20:11-15 immediately follows the Millennium of Rev 20:1-10).

One passage that discusses both judgments is Luke 19:11-27, the Parable of the Minas. In this parable the Lord tells of two groups of people. One group is made up of people who hate the Lord and do not want Him to reign over them. The other group consists of His servants, each of whom He gives one mina (about $10,000 in today’s value) and commands, “Do business till I come [back to earth].”

After the Lord returns, He “commanded these servants, to whom he had given the money, to be called to him, that he might know how much every man had gained by trading.” The results are mixed. One servant gains ten minas and is highly praised and rewarded (Luke 19:17). A second servant gains five minas and he receives no praise and only half the reward of the first servant. A third servant gains no minas and is rebuked by the Lord and receives no reward.

The judgment of the servants illustrates the Judgment Seat of Christ.

The same prophetic gap is seen in Acts 2:17-21, where there is a major gap between vv 18 and 19. Verses 17-18 were fulfilled in the first century. Verses 19-21 will be fulfilled at the end of the Tribulation, which is yet future.

Why Will God Judge Believers and Unbelievers According to Their Works?

The simple answer is because God is just, and He fairly recompenses everyone according to his deeds done in this life. Paul answers the question when he writes, “Do not be deceived, God is not mocked; for whatever a man sows, that he will also reap.”

Of course, to some, this may seem to contradict justification by faith alone. Each person’s eternal destiny is based solely on faith in Christ. The ones who believe “shall not come into judgment” concerning everlasting life (John 5:24). The ones who did not believe will be cast into the lake of fire because their names will not be found in the book of life (Rev 20:15).

If you fail to distinguish between justification by faith alone and judgment according to works, then you end up making statements like this:

The prize is salvation, eternal life. The racetrack represents salvation. If one abandons the race one will not receive the prize (Schreiner and Caneday, The Race Set Before Us, p. 40).

Paul does not guarantee that believers will inherit the kingdom regardless of how they live. He warns that those who succumb to the flesh will not enter the kingdom (Schreiner and Caneday, The Race, p. 294).

Philippians 2:12 [means that] Christians therefore must ‘bring to accomplishment their own salvation with fear and trembling.’ Paul’s choice of words and phrases accents the priority of God’s work without minimizing the necessity of the believer’s obedient act…God is at work through the gospel by urging us onward with the command to bring to completion our own salvation” (Schreiner and Caneday, The Race, p. 185).

The Free Grace understanding of judgment according to works does not have believers “bring[ing] to completion our own salvation.” It does not suggest that “the prize is salvation, eternal life.” The eternal destiny of believers is not in doubt until the day we die since perseverance in good works is not required to gain or maintain everlasting life.

The believer “shall not come into judgment” regarding everlasting life (John 5:24). The Lord Jesus guarantees that he will not be judged at the Great White Throne Judgment.

Once a person believes in Jesus for everlasting life, he has “passed from death into life.” We speak of believers who have died as having passed on to glory. Well, every believer has already passed to glory, in some sense, long before he dies. The moment he believed in Christ, he passed from the sphere of death (lacking the life of Christ) to life (having everlasting life).

A friend of mine, Pastor Bob Bryant, likes to share with people he is evangelizing about this issue of judgment according to works. He first points out that because of Jesus’ substitutionary death on the cross, all who simply believe in Him have everlasting life that can never be lost. But then he goes on to talk about the issue of works. He says that while we are not saved by works, we all will be judged according to our works. Believers will receive degrees of reward depending on the eternal value of their works. Unbelievers will receive degrees of torment depending on their works.

We need not shy away from the truth that everyone will be judged according to his works. That doctrine does not contradict the gift of everlasting life to the believer. Both are true. A child in a healthy home is secure in his family status no matter what he does. But that does not mean that he has his parents’ approval and blessings no matter how he lives. Parental approval and blessings are conditional. So, too, are God’s approval and blessings. As Brad McCoy wrote in the very first issue of our journal in 1988, we are “Secure, Yet Scrutinized (2 Timothy 2:11-13).”