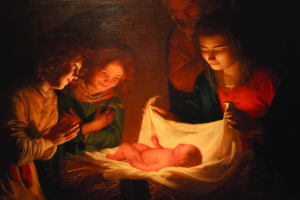 Names in the Bible are important, especially when given by God. God names the first man in the Bible Adam because He created him from the earth.

Jacob’s name means cheater or swindler, which he was, but after wrestling with the Angel (the preincarnate Christ), he was renamed Israel, meaning “one who wrestles with God.”

And of course, Jesus renames Simon Peter which means Rock.

But the most significant names given by God are to His Son.

He Shall Be Called…

The Angel instructed Joseph to call his unborn son Jesus, “for He will save His people from their sins (Matt 1:21). Jesus was His birth name, the OT equivalent to Joshua, meaning salvation.

But during the Christmas season we are drawn to His coronation names found in Isa 9:6, i.e., Wonderful Counselor, Mighty God, Eternal Father, and Prince of Peace. Each one of these names tells us more about Who our Lord is and what He does. Dr. Warren Wiersbe rightly says, “Each name that He bears indicates some blessing He shares, and we can appropriate these blessings by faith” (Wiersbe, The Names of Jesus, p. 3).

Before telling us what our King will do, Isaiah tells us Who our King is, “For a child will be born to us, a son will be given to us.” He will be born as all humans are. But He will be “given” by God:

The angel answered and said to her, “The Holy Spirit will come upon you, and the power of the Most High will overshadow you; and for that reason the holy Child shall be called the Son of God” (Luke 1:35).

The first designation speaks of His humanity, the second of His deity. In other words, He is the God/Man King. Only this One could bear the weight of the following four names.

In Handel’s glorious oratorio, Messiah, he separates these two words into two names. But this is not born out in the text.

The first coronation name is “Wonderful Counselor.” Wonderful is something that evokes wonder and is beyond understanding. As The Moody Bible Commentary points out, it is:

Tragically, today so many believers give little time or thought to the Wonderful Counselor’s words recorded in the Bible and choose to build their lives upon sand (Matt 7:24-27).

The battle began in Eden with our first parents who chose to listen to the Serpent, instead of to God. As a result, the dark overlord now owned and ruled them, and they were of the “domain of darkness” (Col 1:13), having ceded ownership to the evil one. This was the satanic shot heard round the heavens and the opening of the “Seed War” (Gen 3:15). Jesus told his disciples Satan has one operational objective in this war—the annihilation of the race of Adam. He is driven to “steal, kill and destroy” (John 10:10).

But thankfully we have a Mighty Warrior whom Satan cannot withstand. He laid down his life for the sons and daughters of Adam and Eve, was raised on the third day, and now offers eternal life to all who believe (John 11:25-26).

This Christmas we should reflect on the One who fought and died for us and now lives for us.

This next coronation name seems to muddle the idea of the Trinity. If Jesus is God the Son, He can’t also be God the Father. Each member of the Trinity is distinct from the other, yet equally God—una substantia, tres personae.

So how are we to understand this third name? Weirsbe points out,

An Old Testament Jew reading Isaiah’s prophecy would recognize the “father” to mean “originator of” or “author of.” Jesus called Satan the “father of lies” (John 8:44), and Jabal was called the “father of those who dwell in tents and have livestock” (Gen 4:20). In calling Jesus Christ the “Everlasting Father,” the prophet was saying, “He is the originator of that which is everlasting.” (Wiersbe, The Names of Jesus, p. 69).

He is the progenitor. A progenitor is the one from whom all humans descend. Adam and Eve were our physical progenitors who passed on to us physical life. But if we want to live forever, we must be born again and receive eternal life (John 3:3-6). All mankind will exist forever, but only those who believe the promise of Jesus will gain eternal life (i.e., in the new heavens and earth),
while those who do not believe will continue in eternal death (i.e., the lake of fire). See John 3:36:

He is the provider. One of the things a father does is to provide for his children. Jesus being the Eternal Father abundantly provides His offspring with the Holy Spirit (John 14:16-18) and every spiritual blessing (Eph 1:3).

He is the protector. The evil one as previously stated wants to blow up every believer in the world (John 10:10). But like any good human father, Jesus protects His offspring. He kept the disciples in His name, and He keeps us today in that same name (John 17:12). He does this through the sealing of the Holy Spirit (Eph 1:13-14). You seal something to protect it. We are sealed at the moment we believe the message of life until the day we arrive in Heaven (Eph 4:30).

He gives purpose. When we become believers, the Son invites us to participate with Him and His work. After the disciples believed in Him, Jesus did not say goodbye to the disciples but invited them to follow Him. Similarly, He invites us to learn from Him (Matt 11:28-30) and to engage in good works as a member of His Body (Eph 2:8-10). If we do, He promises we will be richly rewarded (Luke 18:29-30; Matt 25:21).

This Christmas we should reflect upon all the many blessings we have from our Lord.

The Prince Of Peace

Finally, He is the Prince of Peace. The Jewish word for peace is shalom. It means the possession of adequate resources, wholeness, and harmony.

Today it seems like there are never enough resources for the day. We run dry emotionally, physically, and mentally. There are so many things to be troubled over today: the political landscape, the viral landscape, and the financial landscape, to name a few. We live in a time that can be both frightful and uncertain.

But so did the disciples. They knew Jesus would soon leave them via death on the cross. In the upper room He said, “Peace I leave with you; my peace I give to you. Do not let your heart be troubled nor let it be fearful” (John 14:27).

It is worth noting Jesus was going to leave them but not leave them alone. He had been with them for three years, and He was not going to quit on them now. He was going to leave them something—peace. Secondly, it was a unique type of peace, “His” peace. It came from Him. It was not an earthly peace, but a heavenly one, because He is from heaven. Thirdly, it is the guardian of their hearts. It is the cure for worry and fear.

There is much in our day to worry about and fear. But as believers we must remind ourselves we have been given the peace of the Prince of Peace.

This Christmas let us reflect on the gift no amount of money can secure, the gift of peace that comes in Jesus.

He is our Wonderful Counselor, the Warrior God, the Eternal Father, and the Prince of Peace. Is there anything else you need for Christmas?