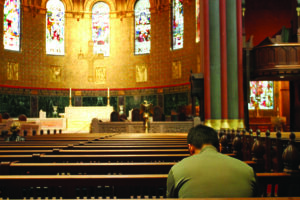 In response to a blog about the need for missionaries to Christendom, a reader wrote:

Shawn, I must admit I was quite taken aback by your words. You are just a year younger than I am, and from your books, blog posts and radio podcasts I’ve listened to that you share with Bob, I know you are as passionate about theology and Church history as I am. So when you call your family in the faith sick, I am saddened deeply.

I’m glad for the comment and the chance to clarify something. I want to be absolutely clear that I do not consider works salvation denominations a part of my “family in the faith.” Moreover, I think it is dangerous to think they are—as dangerous as thinking that Mormons and JWs are fellow family members.

Only believers are God’s family (John 1:12), and those denominations do not believe. Yes, they believe something about Jesus. But they do not believe in Him for eternal salvation. In most cases, they explicitly label the saving message as heresy!

Think of it this way—did all the Jews in Israel automatically believe in Jesus for eternal life? No. Likewise, neither do all the “Christians” in “Christendom.”

On the contrary, we absolutely must be “doctrinal separatists” towards Christendom—that is, towards those denominations that teach false gospels or that deny the gospel.

On the one hand, I think that Fundamentalists have gone too far in applying the doctrine of separation—i.e., what they tell their people to separate from (e.g., musical styles and pants for women) is not what the NT tells us to separate from.

On the other hand, Evangelicals have committed the opposite error of not exercising Biblical separation at all. Instead, they’ve become incredibly permissive about a range of issues dealing with both orthodoxy (right Christian belief) and orthopraxy (right Christian living). I still call myself an Evangelical, but I’m nearing the point of having to drop the label because it no longer reflects what I believe.

In my studies of the Biblical doctrine of separation (which are ongoing), the grounds for “coming out from among them” (2 Cor 6:17) are actually quite narrow, and most often concern behavioral issues, not doctrinal ones. However, if there is one doctrine over which we must separate, it is over the saving message. False gospels are accursed (Gal 1:8), which means those denominations that preach false gospels are under God’s curse.

If you belong to a denomination that denies eternal salvation through faith in Christ, then you must leave it because it is not “the church.”

Of course, individual members of those denominations—whether Catholic, Orthodox, Episcopal, Lutheran, Methodist, etc.—may be born again, because at one time he or she believed in Jesus for eternal salvation. But as a whole—as a denomination—we must be reaching Catholics, Orthodox, Episcopalians, Methodists, Presbyterians, Pentecostals, and Free Will Baptists (among others) with the message of eternal life, because they do not yet believe it.

We are missionaries to Christendom; but we aren’t looking to convince people about doctrinal peccadillos—we’re missionaries bringing the message of everlasting life to people who desperately need it.