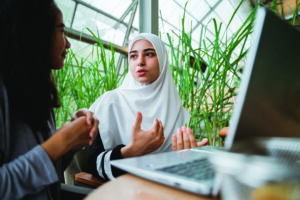 The only good Muslim is a dead one!”

I was talking to a friend I met in college. Now, more than a decade later, he had become a successful businessman and was active in the local government of a thriving east Texas city.

I was shocked by what he said.

I had called him because I was raising financial support to work with a Christian ministry that trains believers and churches to reach Muslims with the love of Christ. My friend had grown up as a missionary kid in Latin America, and I went into the phone call thinking he would likely want to support my ministry. But my friend’s heart was far from God’s, even though he was an active leader in the adult and family ministry at his church.

Regrettably, my friend’s heart towards Muslims is not uncommon, even among believers. Many Western Christians’ attitudes and beliefs about Muslims are shaped more by media stereotypes and generalizations than by God’s love for all people as clearly expressed in the Bible (cf. John 3:16).

I grew up in south Texas, where there were either few Muslims, or I was unaware of them.

When I went away to college, I met some Muslims in my classes, but did not get to know them because we were in different social circles.

It was not until I got to know some personally (which happened to be on a mission trip in a Muslim-majority country) that I realized how ungodly my attitude toward Muslims had been. Now, God was transforming my heart through real-life interactions with Muslims. I was beginning to see them as fellow humans, made in the image of God, worthy of respect and love, just like every person—no matter his or her race or background.

Years later, when I moved to Central Asia as part of a church planting team, a young Muslim man in my new neighborhood told me, “You need me and I need you. You need me to help you understand us.” My relationship with him became one of God’s greatest blessings to me during the years I lived there.

Sadly, many Christians never experience the blessing of getting to know a Muslim personally. And even if they are not hostile toward Muslims, many remain apathetic or ignorant of Muslims and their spiritual needs.

Missions Must Include Muslims

I have attended churches where the leadership regularly talked about reaching the world for Christ, taking the gospel to the nations, participating in the Great Commission, and planting churches around the world.

Amen! These are great things!

I have asked some of these leaders, “What is your plan for reaching Muslims?”

I usually get a blank stare or an answer such as “God has not called us to that,” or “It’s too costly,” or even “Sure, Muslims can come to our church!”

In other words, there seems to be a disconnect with believers and church leaders about how reaching Muslims is involved in “reaching the world.”

Though there might be legitimate reasons for some not to focus on Muslims, here are some reasons why reaching Muslims should be a priority for many, if not most, churches:

The news is even more depressing regarding Evangelicals. In 2017, Christianity Today reported that white Evangelicals were the least likely Americans to know a Muslim, with nearly 2/3 saying they did not know even one Muslim.

Despite many believers’ and churches’ ungodly hearts toward Muslims, God is doing amazing things. Thousands upon thousands of Muslims around the world are turning to Christ.

Muslims are having dreams about Jesus.

And as some Muslims flee the tragedies of war, oppression, and poverty in search of a better life, they often encounter the saving message of Jesus. They are seeking out churches and believers to tell them more.

Believers around the world are praying for God to raise up missionaries and church planters to Muslims.

In Iran, Bangladesh, Indonesia, China, Turkey, Greece, and numerous other places, Jesus is building His church with Muslim-background believers.

Re-Aligning Our Hearts with God’s Heart

Do you have apathy, anger, fear, or hostility towards Muslims? If so, I encourage you to stop and pray. Ask God to change your heart and align it with his.

Also, consider making relationships with Muslims a focal point in your personal life and in your church.

According to the Center for the Study of Global Christianity, 86% of Muslims do not know a Christian personally.

Nearly 9 out of 10 Muslims in the world do not have a relationship with a Christian.

As believers in Jesus’ promise of eternal life, we have the greatest news the world has to offer. My prayer is that God will bring more and more Free Grace people into genuine relationships with Muslims to share this life-giving news.

If you are a pastor or church leader, why not prioritize sending missionaries to and planting churches in the Muslim world? There is great need, and Muslims have largely been ignored by the church historically.

Will it be popular among church members to focus on loving Muslims? Probably not.

Will it be easy? Of course not.

Will it be costly? Certainly.

Will there be immediate “results”? Likely not.

Will God bless you in it? Absolutely!

Here are some suggestions for realigning our hearts with God’s when it comes to Muslims:

Pray for Muslims. God is answering the prayers of his people who are interceding for Muslims to turn to Christ. Through the process of informed prayer for Muslims, many Christian hearts have been delivered from anger, apathy, and fear of Muslims.

Prioritize befriending Muslims. Resist the urge to become an “expert” or apologist on Islam (especially solely through books or media). Books can be helpful for acquiring knowledge and perspective, but every Muslim is unique. Consider doing a free, short study, like Keith Swartley’s “God’s Heart for Muslims” to learn more about Islam and how to lovingly relate to Muslims.

Visit Muslims. If possible, visit a nearby mosque. Many mosques host open houses about once a year to answer questions non-Muslims may have and to get to know those in their community. Don’t be a stranger. They often serve delicious food for the event! Do an internet search for mosques near you. Visit their websites or check out their Facebook pages. If no events are listed, call and talk to someone at the mosque. Listen and learn. Resist the urge to debate and feel free to share graciously and appropriately what you believe. Ask questions. For example, “How is it being a Muslim in America?” “Do you keep the fast at Ramadan?” If you don’t know much about Muslims or Islam, don’t worry! Most Muslims are open to discussing religion or spiritual things.

Invite Muslims. Should you invite a Muslim friend to church? This is likely not the best way to introduce Muslims to Jesus. If your church resembles a traditional Western church (e.g., preacher, crosses, band/choir, etc.), consider inviting a Muslim friend to your small group instead. Although visiting a Western church for a Muslim would be a fascinating cross-cultural experience, it would probably erect unnecessary cultural barriers that blur the message of Jesus and the Bible. A small group (that meets in a home), however, is more informal and gives you the opportunity to demonstrate love through hospitality, which most Muslims appreciate and value.

Led to Reach Out

How might God be leading you to pray for, have compassion for, and graciously engage Muslims?

As I mentioned earlier, Muslims are having dreams about Jesus. But apparently, God is also using dreams in the lives of believers to reach Muslims. Such was the case with Jim.

A few years ago, Jim’s college-age son asked if they could host an international student from Saudi Arabia. At first, Jim said, “My wife and I discussed where all the possibilities are in our house that he could conceal the bomb that we knew he would be making, so we declined.”

However, his son persisted in asking. And Jim had a recurring dream of trying to explain Jesus to an Arab-looking man. He became convinced that God had plans for him in a realm outside of his comfort zone.

Jim ended up becoming friends with the imam at a nearby mosque, taking a trip to Muslim-majority areas in Africa, and getting to know more Muslims.

May our hearts be aligned with God’s heart for all peoples…including Muslims.

Peter Darvoz grew up in Texas. He served on church planting teams to Muslims in Central Asia. Currently, he works with a ministry to equip and mobilize Christians to reach Muslims with the love of Christ.