“Be kind to one another, compassionate, forgiving one another, just as God in Christ also forgave you” (Eph 4:32).

Forgiveness is natural to God. But it is not arrived at easily. Before He can forgive, God’s justice must be satisfied. It is impossible for Him to forgive by simple declaration. He cannot remain just and righteous and pardon the guilty. Sin creates a debt, and that debt must be paid.

Our Sense of Justice

This brings me to our forgiveness of others. We have all struggled unsuccessfully with forgiving those whom we love. Why is this? If we love them, forgiving them should be easy. So we think. Yet that is not typically our experience.

There is without a doubt more than one reason for this contradiction between our love and our ability to forgive. My desire is to focus on only one: the need for justice. The sense of justice is the strongest aspect of conscience in every human being. It is this sense of justice that contributes to making forgiveness difficult. Sadly, we communicate to people that a loving person wouldn’t be interested in justice.

Nothing could be further from the truth.

God is love, and God is just. Desiring justice is a good thing. It speaks of our humanity being in the image of God. It is the pursuit of justice on our terms that is wrong. Vengeance, the punishment of evil, is God’s territory. Not ours. But to want it is not in itself sin.

So how then do we reconcile love and forgiveness—both of which we are commanded to do—when we instinctively know that forgiveness is wrong if it ignores the demands of justice? Does God expect us to simply act like the sin never occurred? Does He want us to love in denial of what really happened? No, that would be a lie. God is truth. He doesn’t call us to ignore sin or to call it by some other name so as to minimize it.

Then on what basis does a just and holy God call us to forgive our enemies? He, better than anyone, knows that it is wrong to pardon the guilty! He is the One who put that sense of justice in us!

I have come to experience great freedom and joy in knowing that the forgiveness I am called to give is not based on love and is not in violation of justice. The forgiveness God calls me to is based upon the just payment that Jesus has made for all sin: all of my sin and all of everyone else’s sin. All sin has been paid for. God has forgiven it. Therefore, it is justly forgiven. It is just for me to forgive sin that has been justly paid for.

There is no debt. There is no obligation. There is not even an apology that is needed. It has all been paid for and forgiven. This is not “make-believe.” It is reality. Jesus paid it all. 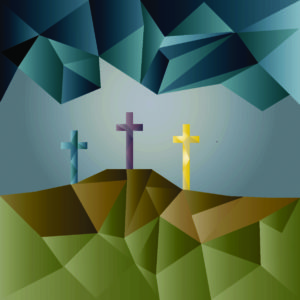 It has been a great help to me to realize that the forgiveness that God calls me to extend to another is predicated upon God’s just acceptance of Christ’s payment for the very sin that I have suffered from. He is not telling me to feel forgiving, or to suspend judgment, or to love more. He is telling me to be in agreement with His justice as demonstrated in the death and resurrection of Jesus Christ.

Not Forgiving Is a Violation of Justice

With this understanding, I realize that to not forgive sin that has been paid for by Christ, and forgiven by God, is itself a violation of the very justice that I long for. It is an injustice, and it is sin. There is also the realization that to refuse to forgive what God has forgiven is pride, the root of all sin.

Refusal to forgive is, in effect, telling God that He was wrong to raise Jesus from the dead. It is to say that His death was inadequate payment for the sin I have suffered from. It is to say that Jesus should still be hanging on a cross or lying dead in a tomb.

This leaves me with a question: who am I to not forgive what God has righteously and justly forgiven through the payment of Christ’s shed blood? We enter into the life and joy of Christ when we humbly allow God’s just verdict on sin to be our verdict: Forgiven. Forgiveness isn’t easy but it is just when it is in response to Christ’s payment for sin.

Thank you, Lord Jesus, for dealing fully with my sin and with the sin of those who have hurt me. Thank you that justice has been served, that I am forgiven, and that I can give forgiveness on that basis.