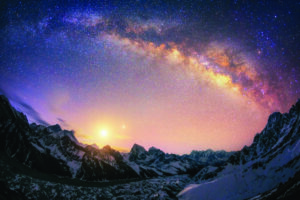 Not Justified by Works of the Law

The context here is Paul’s public rebuke of the Apostles Peter and Barnabas for withdrawing from Gentiles, evidently at the Lord’s Supper, the love feast. Hence Paul speaks of the works of the law especially since Peter and Barnabas were kowtowing to Judaizers regarding the OT dietary laws, which were no longer in force (see Peter’s three visions in Acts 10).

When Peter and Barnabas withdrew from the Gentiles, they “were not being straightforward about the truth of the gospel.” While they did not verbally say that one had to do more than believe in Jesus to be justified before God, their actions implied that. Campbell makes this point when he says that Peter and Barnabas “were denying by their actions the truth that on the basis of Jesus Christ’s death and resurrection Jews and Gentiles who believe are accepted equally by God.”3

Justified by Faith in Christ

Three times Paul refers to believing in Jesus in order to be justified before God. “By faith in [Jesus] Christ” occurs twice for emphasis. He also uses the verb believe (pisteuō) in conjunction with one of the references to faith: “Even we have believed in Jesus Christ” for the purpose “that we might be justified by faith in Christ.” The word we refers to Jewish believers, including Peter and Barnabas. When they withdrew from table fellowship with Gentiles, they were essentially contradicting their own justification by faith “and not by the works of the law.”

By withdrawing from the Gentile believers, Peter and Barnabas were unintentionally calling into question justification by faith alone. Paul said that “they were not straightforward about the truth of the gospel” (Gal 2:14). Justification is by faith in Christ, apart from works. It really is that simple.

Receiving the Spirit by Faith, Not Works (Galatians 3:2)

This only I want to learn from you: Did you receive the Spirit by the works of the law, or by the hearing of faith?

Paul is amazed that Judaizers had bewitched the believers in Galatia (Gal 3:1). That leads to the question raised in v 2. How did the Galatians receive the Spirit?

When a person believes in Christ, many things happen to him. He is justified by God the Father right then. The Holy Spirit regenerates him, baptizes him into the Body of Christ, and seals him forever. The Spirit also takes up permanent residence in the believer. This is called indwelling. Here Paul refers to the initiation of the Spirit’s indwelling as the time when the readers received the Spirit. To receive the Spirit is another way of speaking of regeneration or justification, since they all occur simultaneously.

Paul’s question is rhetorical. The answer is obvious.

The readers were Gentile unbelievers when Paul evangelized them. He did not preach the Law of Moses to them. They did not receive the Spirit by works of the law. Yet when Judaizers came into their churches, they were being duped into thinking that in order to retain the Spirit and their justification, they had to keep the law. That makes no sense.

The expression “by the hearing of faith” (ex akoēs pisteōs) sounds a bit wooden. It has been variously explained by commentators as “[by] listening to the doctrines of the faith,”4 “by hearing
God’s word with faith,”5 “by faith in the Word of God,”6 “by faith in the gospel message,”7 “[by] hearing and believing,”8 and “on the basis of believing what you heard.”9

Regardless of how we render that expression, Paul’s point is that the readers received the Spirit and were justified by faith in Christ, not by works of the law.

Supply of the Spirit and Working of Miracles by Faith, Not by Works (Galatians 3:5)

Therefore, He who supplies the Spirit to you and works miracles among you, does He do it by the works of the law, or by the hearing of faith?

The Supply of the Spirit & the Working of Miracles

As in Gal 3:2 (chapter 54), Paul uses other expressions to refer to regeneration. “He who supplies the Spirit to you” refers either to the initial reception of the Holy Spirit by the readers when they first believed in Christ, or possibly to that plus the ongoing permanent indwelling of the Holy Spirit which began when they believed in the Lord Jesus for everlasting life. The reference to “He who…works miracles among you” refers to the miraculous works which the Apostle Paul did in their midst by the power of the Holy Spirit. It might also include any additional miracles that God did among them after Paul left. Though he does not mention God’s name explicitly, Paul puts the attention where it belongs, on God, who is the Source of the Spirit and of the miracles that they witnessed. In addition, they have nothing to boast about in regards to these miracles. Thomas Constable correctly points out that “God did not perform them [the miracles] because the Galatians did something special to earn them.”10

Paul is once again denying justification/regeneration by works.

There were people, whom we call Judaizers, who were distorting the gospel of Christ (Gal 1:8-9). They were saying that faith in Christ was not enough to make it into Christ’s kingdom. They were essentially teaching justification by law-keeping (see Gal 5:4; cf. Acts 15:1). Justification is by faith in Christ, apart from works. Not even works done after justification are required to remain justified. While justified people are expected by God to produce lives full of good works, those good works are not a condition either of being justified or remaining justified. Temporary or even ongoing failure is possible for believers (as the Book of Galatians itself illustrates). Justification is by faith alone. For a person who believes in Christ to be misled—to take his eyes off Christ—and then to buy into a works-salvation mindset, is like being bewitched (Gal 3:1-2). George says that in the case of the Galatians, Paul was telling them that those who were teaching them justification by works were “like evil magicians…trying to seduce [them] from the way of Christ to a counterfeit gospel.”12