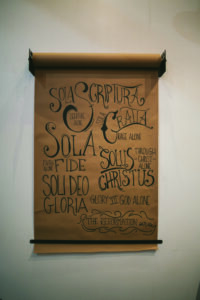 An Excerpt from Faith Alone in One Hundred Verses

And he believed in the LORD, and He accounted it to him for righteousness (Genesis 15:6).

My parents had given up hope. Though their first child, a daughter, came after just a few years of trying, the second child, another daughter, did not come until nearly eight years later. Seven years after that, when my mom was thirty-nine and well past hope, they found out they were expecting. When I was born, they learned they finally had a boy. I imagine that is what Abraham felt when Isaac was born. But unlike my parents, Abraham had a promise from God Almighty that he and Sarah would indeed have a son. That promise from God came long after it was reasonable for them to have a child.

The Accounting of Righteousness Refers to Justification before God (Romans 4; Galatians 3)

Paul quotes Gen 15:6 in Rom 4:3 and Gal 3:6. In those contexts, Paul is clearly defending justification before God by faith in Christ, apart from works (see Rom 4:1-8; Gal 3:6-14, esp. vv 8, 11). Genesis 15:6 tells us that God declared Abraham righteous because he had faith in the Lord. But was Paul stretching things to suggest that Abraham is an example of one who believed in the Messiah for his justification before God?

If we go outside Genesis, we know that the Lord in whom Abraham believed is the Messiah, the pre-incarnate Lord Jesus Christ. Indeed, the Lord Jesus Himself said, “Abraham rejoiced to see My day” (John 8:56). That is, Abraham was happy to realize that the Lord Jesus was coming to establish His kingdom in the Promised Land. Compare Heb 11:10, which says that Abraham was looking for the New Jerusalem.

Paul quotes Gen 15:6 in both Romans 4 and Galatians 3. In both cases he uses that verse to prove that justification is by faith alone in the Lord Jesus Christ. Moo maintains that Paul sees a “Christological focus” in Gen 15:6 and that this focus is both “fair and appropriate.”2 If Gen 15:6 is not about justification by faith in Christ, then Paul has deceived us. But that is impossible, for God’s Word is true. 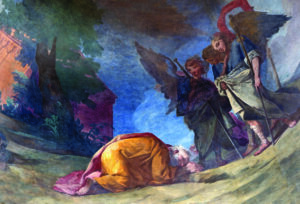 Abraham Actually Met the Lord Jesus Christ and Spoke with Him on Many Occasions (Genesis 12-18, 21-22)

We tend to think of Abraham as someone who knew little or nothing about the Lord Jesus. But that is not true. He met the pre-incarnate Lord Jesus Christ on many occasions. Face-to-face. See especially the dialogue Abraham had with the Lord Jesus in Genesis 18 as Abraham comically tried to negotiate for the saving of Sodom (50…45…40…30…20…10). You and I have never seen Him. But Abraham met with Him often. Neyrey takes this position. While God the Father is invisible, Christ is the visible God that appeared to Abraham.3

Remember that the Lord Jesus said, “Abraham rejoiced to see My day.” He saw, that is, anticipated, Jesus’ day, His coming kingdom, while he was meeting with Him. Now, we do not know if Abraham knew that His name is Jesus. He probably did not know that. But he knew that He was the Lord. And He believed that by faith in Him he would spend eternity in His coming kingdom in the Promised Land.

“Now the parable is this: The seed is the word of God. Those by the wayside are the ones who hear; then the devil comes and takes away the word out of their hearts, lest they should believe and be saved” (Luke 8:11-12).

In the 1950s, there were two major crusade-style evangelists, Billy Graham and Charles Templeton. Both spoke nightly to stadiums filled with 25,000 or more people wanting to hear about Christ. Graham went on to become the leading evangelist of the second half of the twentieth century. In 1957, Templeton left the ministry, declaring himself an agnostic. In 1995, he wrote a book entitled Farewell to God: My Reasons for Rejecting the Christian Faith. He died in 2001. If Templeton believed in Christ before he fell away, is he with the Lord now?

Salvation from Eternal Condemnation Is in View

No other type of deliverance makes sense in this context. Commenting on v 12, Bock says that the “spiritual condition of this first seed is clearly a picture of the unsaved.”4 The devil wants to keep people from being born again. So he works hard to take the word out of the hearts of people. Satan knows that if they believe in the Lord Jesus Christ, then they will be irrevocably saved. He puts a lot of effort into keeping people from coming to faith in Christ.

The Sole Condition Is Faith

The Lord does not mention repentance, turning from sins, commitment, obedience, or anything other than faith. While He does not specify that the faith is in Him, it would be obvious to Theophilus, the believing reader of Luke-Acts, or to any believing reader, that the Lord was speaking about faith in Himself.

Luke is not an evangelistic book. But there is enough in Luke 8:12 to show that salvation from eternal condemnation is by faith alone in Christ alone.

The Lord Then Illustrates Three Types of Believers (Luke 8:13-15)

Verses 13-15 illustrate three types of people who believe and are saved.

Only in v 13, with the rocky soil, do we specifically read “who believe.” We know from v 12 that what they believe is the saving message. So they are saved. Yet the Lord said that after they believe “for a time,” “in time of temptation [they] fall away.” The first type of believer is one who falls away. Green points out that this parable of the Lord clearly teaches that there is “the possibility” that those who have believed will not finish the course.5 If Templeton believed the faith-alone message before his departure, then he is indeed with the Lord now.

Verse 14 tells us of a type of believer whose fruitfulness is choked out by “cares, riches, and the pleasures of life.” Cares are not sinful. Nor are riches. Nor are the pleasures of life (hunting, fishing, golf, tennis, reading, talking, etc.). But all of them have the potential of robbing a believer of his devotion to Christ. Ironside says that these kinds of things are “innocent,” but if they occupy the mind of the believer, he will be “sorry through eternity” that he put these things before devotion to the Lord.6 This sort of believer does not fall away. But he also fails to bring “fruit to maturity.”

The third type of believer (v 15) is the one who endures in faithfulness to Christ. The Lord calls him “the good soil.”

Prince Charles and Diana, Princess of Wales, were overjoyed to have a son, William, who would likely one day become the king of England. Prince William is a child of royalty. He is tremendously blessed. An even greater blessing is being a child of God, the Almighty.

The Prologue Lays Out the Faith-Alone Message

John 1:1-18 is the prologue of the book. In the prologue, the Apostle John whets the unbelieving readers’ appetite (John 20:31) for the saving message. He tells them a bit of who Jesus is.

Various chiastic structures (e.g., ABCDC’B’A’) have been suggested for the prologue. Many of these show John 1:12-13 as the very center of the prologue.

Most in Israel rejected Jesus and His message (John 1:11). Bruce states that Jesus “came in the form of special revelation to the people of Israel,” but this revelation was repeatedly ignored.7 But some received Him and His message. That is, some “believed in His name.” Those who believed in His name “become children of God” (John 1:12) and hence have been “born of God” (John 1:13).

The Issue Is Faith in Christ for Everlasting Life

John 1:12-13 clearly states that whoever believes in the Lord Jesus Christ has become a child of God and has been born of God. Brodie says that the main idea of these two verses is that “belief generates birth, a supernatural birth.”8 The sole issue is faith in Christ for the life He promises.

“And as Moses lifted up the serpent in the wilderness, even so must the Son of Man be lifted up, that whoever believes in Him should not perish but have eternal life” (John 3:14-15).

Have you ever wondered about the odd symbol of the American Medical Association? It is two snakes wrapped around a staff. Well, in Greek mythology snakes on a staff or pole are associated with healing. However, that myth goes back to an actual historical account of how dying Israelite people were healed by looking upon an uplifted bronze serpent made by Moses. The Lord Jesus referred to that account to teach people that He saves all who look to Him in faith.

The Lord here recalled a famous event in Israel’s history. During the forty years of wilderness wandering, the people often complained and rebelled. On one of those occasions the Lord sent venomous snakes through the camp. As a result, “many of the people of Israel died” (Num 21:6).

After the people confessed their sins, Moses prayed for them. God told Moses to make a serpent and set it on a pole “that everyone who is bitten, when he looks at it, shall live.”

This deliverance from physical death was not of works. Barnhouse emphasizes this fact when he says that the Israelites “were to cease from human remedies and turn to a divine remedy.”9 The people did nothing for this healing other than look to the uplifted serpent as God had said.

The Cross and the Gift of Life Are the Antitype (John 3:15)

This incident was a type of Christ being lifted up on the cross (“so must the Son of Man be lifted up”) and of faith in Him for eternal life (“that whoever believes in Him should not perish but have eternal life”). Boice rightly says that we can only understand the point of Numbers 21 here in John 3 when we see that it is “intended to prefigure the raising up of the Lord Jesus Christ on the cross.”10

A type is a literal historical event which has prophetic significance. Abraham offering up his only son Isaac foreshadows God the Father offering up His only Son on the cross for our sins. Likewise, Moses lifting up the bronze serpent on a pole for healing to all who look upon it foreshadows Jesus being lifted up on the cross for salvation to all who look to Him for that salvation.

By looking in faith to the uplifted Messiah, we live. That is, we gain everlasting life which can never be lost. The Israelites in Numbers 21 “received a prolongation of mortal life, but it is eternal life that the Son of Man ensures to those who look to him.”11

The sole condition is faith in the Lord Jesus Christ.