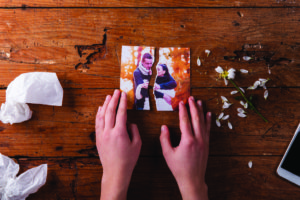 If you ask ten theologians their views on divorce and remarriage, you will get eleven different answers. I have engaged in many of these discussions myself. One verse included in all these debates is Mark 10:11. The Lord says, “Whoever divorces his wife and marries another commits adultery against her.”

While this is a straightforward statement, it leaves us with a number of questions. In Mark, the Lord does not mention that adultery is an exception. In fact, there are no exceptions given in Mark 10. But in Matthew, the Lord says that adultery is an exception (Matt 5:32; 19:9). Would the reader of Mark simply realize that if a woman commits adultery, her husband can divorce her?

And what about other exceptions? Paul will say later (1 Corinthians 7) that the Lord did not deal with the issue of a believer who is married to an unbeliever, and the unbeliever wants a divorce. What about a woman who is married to a man who beats her? How about a spouse that abuses his or her children? What about desertion? Are any of these and other situations grounds for divorce? If any of these exceptions exist, can the divorced believer remarry?

For centuries Christians have discussed Mark 10:11 to address these issues. Is the Lord saying that there are no grounds for divorce and remarriage? Or, are there loopholes? When can we justify divorcing our spouses?

In the context of Mark, I think when we ask these questions, we are missing the main point.

Mark 8–10 is a long section in Mark that deals with discipleship. In it the Lord is teaching the disciples what kind of believer will be great in the kingdom of God. What the Lord teaches the disciples is hard for them to understand.

The section begins by the Lord telling the disciples they must lay down their lives to be His disciples (8:34-38). To be great means to be a servant (9:35, 37). There are rewards for serving others (9:41). Many who think they are first will be last, and many who think they are last will be first (10:31). Whichever of the disciples wants to be first must become the slave of all (10:44). We could summarize this teaching by saying that if a believer wants to be great in the kingdom of God, he or she must humbly lay down his or her life in serving others.

We need to keep in mind that the Lord’s teaching on divorce occurs right in the middle of this instruction about being great in the kingdom.

The Disciples were Clueless

All of this teaching on greatness in the kingdom of God goes against what the disciples thought. When Jesus says He will set the example of being a servant by dying on the cross, Peter rebukes Him (8:32). They did not understand what Jesus was teaching them (9:32). They argued about which one of them was the greatest (9:34). They didn’t understand what Jesus was saying about divorce (10:10). They thought they could be great without being servants (10:37).

Mark makes it clear that the disciples were not servants of others. Instead of being humble, they looked down on those they deemed unimportant.

The Disciples Were Not Servants

In this section in Mark, we see how the disciples treated others. Probably because three of them were chosen by Christ to see the Transfiguration, some had a big head, and the others resented the fact that they weren’t chosen. As a result, there was an argument about who was the greatest (9:34). Immediately after this argument, John tells the Lord that the disciples had told a guy ministering in the name of the Lord to stop doing so because he was not one of the Twelve. This guy was not a part of the “in” crowd (9:38).

When parents brought their children to be blessed by the Lord, the disciples thought these children were not nearly important enough to bother Him. They did their best to keep these children away from the Lord (10:13). When an important man wanted to approach the Lord, they had the opposite reaction. The disciples were amazed that this rich man was not more warmly received by Him (10:17-26).

Clearly, the disciples were men influenced by their backgrounds. Rich and influential men were worthy of their attention. Unimportant people, such as children and outsiders, were not on their radar. The disciples did not see any need to serve such unworthies. This attitude was even affecting how they saw each other.

It seems that Jesus’ teaching on divorce gives us another example of how the disciples saw others.

What About Our Wives?

As we see how the disciples failed in humbly serving others, we are told that Jesus taught them about divorcing their wives. The teaching arises when the Pharisees ask Him if it is okay to divorce a wife (10:2). Like children, women were seen as second-class citizens in that culture.

It is well-known that there were two schools of thought among the Jews. One was conservative, the other liberal. These schools argued over what were legitimate reasons for ridding oneself of a wife, according to the Law of Moses.

The Lord responds that God’s design from the beginning was that marriage would last for life. To break God’s design by divorcing your wife and marrying another woman would be to commit adultery.

We can see the importance that the Lord placed on marriage. We live in a day when marriage is not as honored as it should be. Divorce and remarriage are rampant, and we do well to remind ourselves of what the Lord says here in Mark 10.

However, it seems that the teaching of the Lord here is almost always used to answer the question the Pharisees asked. They wanted to know when it was okay to divorce a wife. They wanted to know what loophole they could go through if they wanted to get rid of her. Sometimes, it appears we want to know the same thing. While this is a practical concern, we might be missing the main point.

I would suggest that the issue of wives in Jesus’ teaching in Mark 10 is related to what He is teaching the disciples about humbly serving others. They thought children were not as important as they were. They thought the same thing about those who were outside their group. Some of them even thought they were better than the other disciples. Societal standards determined who was worthy of their time and effort.

The Pharisees certainly saw wives as less then men. The disciples, being products of the society in which they lived, shared that view. Men could certainly divorce their wives. The only question was what were the reasons the Law would allow?

Jesus teaches the disciples that they should not be looking for acceptable reasons for getting rid of a wife. God meant for the marriage between a man and woman to last forever.

In the context of Mark 8-10, the message seems clear. Since God meant for marriage to last forever, men should humbly serve their wives. Like children and those outside of their group, they are not to be looked down on or seen as less important. If we are looking for the answer to when we can divorce our wives, we are asking the wrong question. We should be asking the main question: how can we serve our spouses? After all, that is what pleasing the Lord and greatness are all about.