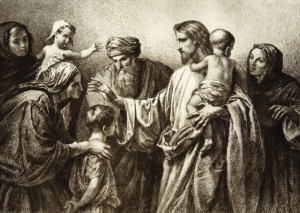 Oftentimes, when we attempt to learn something new, we have to do it over and over again.

We all remember when we were taught something new in math, such as our multiplication tables. We had to repeat the tables numerous times, write them out on sheets of paper, and our teachers would drill us until we learned them.

The Lord does the same thing for us. If we want to grow in discipleship and learn new things in the process, we can ask Him to teach us and He will do it. Sometimes, however, it takes more than one lesson.

I recently noticed that He does this with His disciples in the Book of Mark.

A Lack of Self-Understanding

Mark 8–10 is often called the discipleship section of the book. The disciples, who are already believers, are depicted as not understanding what it means to follow Christ. While receiving eternal life is a free gift that can never be lost, following Christ is difficult, and believers can choose to pay the cost and follow Him, or choose not to do so. If they decide not to follow, they will lose rewards in the kingdom of God, even though they can never lose their eternal life.

One lesson the disciples needed to learn was that if they wanted to be rewarded in the kingdom and be great in the world to come, they would need to learn to have the right attitude about themselves. Fortunately for them, the Lord was a patient teacher. They didn’t get it the first time, so He gave them many lessons.

In school, some lessons were more difficult to learn than others. The teacher would tell us that in those cases, the class would spend more than one day on the topic. The extra time was needed to let the new concept seep into the brains of the students.

Similarly, it is evident in Mark 9:33–10:45 that the Lord has a particular topic He wants to teach the disciples. This section begins with them arguing about which of them will be greatest in the kingdom (9:34) and ends with that same idea (10:37). It begins with the concept of who will be “first” in the kingdom (9:35) and concludes with that as well (10:31). The Lord tells them the answer to what they want to know at the beginning and end of the section: if they’re going to be great in the kingdom, they must be servants of others (9:35; 10:44-45). That is a concept they don’t get, and it will take four lessons to learn what the Lord wants them to see.

The first lesson concerns a man that is casting out demons (9:38). The disciples want him to stop doing that because the man was not one of them. They saw themselves as privileged disciples and resented that somebody outside of their group would dare to operate without their approval. In their minds, they were superior to that man—he was not on their level.

The Lord had to rebuke the disciples for this way of thinking. Instead, they should encourage this man in his labor for the Lord. Their attitude towards him ran the risk of doing the exact opposite and actually discourage him from following the Lord. Here was a novel idea for them. They should serve this guy and actually help him.

For their second lesson, Jesus used a different illustration to teach the same point.

Based upon their culture, these twelve men saw themselves as superior to women. For example, in Jewish society, a man could divorce his wife, and the only issue was whether he needed a reason to divorce her. On the other hand, a woman could not divorce her husband, no matter the circumstances.

By contrast, the Lord teaches them that it was never God’s design for divorce to take place, but it is a necessary evil due to the hardness of men’s hearts (10:5).

So here is the lesson for the disciples: they looked at the issue of divorce and tried to determine what would be best for themselves, but did not ask what was best for the woman or ask what God wanted. Contrary to their tradition, the Lord places the wife on equal footing with the husband.

This was a hard lesson for these men. Was the Lord really telling them to be concerned about women who they wrongly supposed were obviously inferior to their husbands?

Once again, we see that the disciples couldn’t grasp the concept. They had to go off with the Lord and get some more instruction on this novel idea (10:10).

Jesus rebuked the disciples for their attitudes toward children (10:13). As with the exorcist and the wives, these twelve men had an inflated opinion of themselves and despised others they considered beneath them.

The fourth and final lesson comes to the disciples in the form of a rich man. He approaches the Lord, and the disciples are glad that this man is in their presence. After all, he is rich and powerful, and they can receive him as an equal. They saw him as an important person (which is how they saw themselves).

To their surprise, the Lord had to correct them once again. He taught them that the rich and powerful of this world are often not those who will be rich and powerful in the kingdom. In fact, many such people will not even be in the kingdom (10:23). That idea was astonishing to the disciples (10:26). They thought the poor in this world would be poor in the world to come as well.

All four of these lessons have something in common. The disciples thought those outside their group—including children, women, and the poor—were not significant enough to waste time on. The disciples also had an elevated view of their own importance. They wanted to follow the Lord, but they needed to change their mindset.

In each of these four situations, Jesus tells the disciples that instead of thinking they were better than others, they should look at all these people as more important than themselves and should seek to serve others. What a radical way of thinking! But Jesus makes it clear that it is that kind of attitude that will make a believer great in the kingdom.

The word disciple means a student. The Twelve desired to learn from the Lord, but they had much to learn. Fortunately for them, and for us, the Lord is patient when He teaches His children what they need to know. If we want to learn, He will keep teaching us until we get it.

Here, in the Gospel of Mark, we are told the Lord taught four classes on the same subject. The good news is that these men eventually understood the lesson. Instead of thinking about how great they were, they learned that they ought to look out for others. John, one of the Twelve, would later write that believers ought to be so concerned for others that they should lay down their lives for them (1 John 3:16). That is the epitome of what being a servant is all about.

All of us have things we need to learn. We are even unaware of some areas where we need instruction. We should ask the Lord to teach us. Perhaps we should add: “Lord, when I don’t get it the first time, can you repeat it until I do?”

Ken Yates speaks for GES all around the world. His latest book is Hebrews: Partners with Christ and he is currently working on a commentary on Mark’s Gospel.