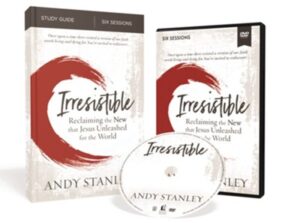 Andy Stanley was a few years behind me at Dallas Theological Seminary. I recall grading some of his papers. I’ve long had a high regard for him.

As I read his recent book called Irresistible1, I became concerned about the direction his ministry appears to be taking. He seems to be downplaying the Bible because he thinks that doing so improves our ability to reach unbelievers and even new Christians.

I found eight major points Stanley is making in Irresistible2.

First, he suggests that we should never say to unbelievers, “The Bible says…” That is a very resistible message. Most people today do not respect the Bible or believe that it is authoritative. He thinks if we avoid talking about what the Bible says, our listeners will be more open to what we have to say.

Second, Stanley urges us to announce the names of speakers or authors, but not book, chapter, and verse. For example, if we wanted to quote Jesus’ words in John 3:16, we might say, “Jesus said that God so loved the world that He gave His only begotten Son…” But we would not mention “John 3:16,” and we would not mention “the Bible.” In a heading he puts it this way, “JESUS FIRST, BIBLE SECOND” (caps his, p. 298).

Third, when teaching the Bible to Christians, he charges that we must take care to avoid presenting OT principles as though they were still in force today. He strongly rejects what he calls “mixing and matching (pp. 93-95, 104).

Fourth, Stanley believes that the OT is not as authoritative as the NT. I know. It sounds like I must have misread him. But that is what he says. He writes, “‘The Bible says’ establishes the Bible, as in everything in the Bible as equally authoritative. It’s not. If it is, we have a schizophrenic faith because, as we’ve noted, the Bible contains two covenants with two different groups for whom God has two different agendas” (p. 307, emphasis added).

Fifth, Stanley thinks it is more accurate to say that the authors of the Bible were inspired, rather than saying that the Bible itself is inspired. He writes, “So while we are accustomed to saying The Bible is inspired, it is more accurate and helpful to say, The authors of Scripture were inspired” (p. 302). For support he quotes Peter and Paul, though without mentioning where they said these things, though at the end of his book, Stanley does list specific chapter and verse.

Sixth, the reason why so many Americans do not go to church is “because we’re too caught up in what’s in it for us rather than what love requires of us” (p. 322, emphasis required).

Seventh, “most ancient Jews didn’t believe in an afterlife. Why? Their Scriptures did not assume one” (p. 165).

Eighth, the Christian faith is based on the resurrection of Jesus Christ: “There once existed a version of our faith that rested securely on a single unprecedented event—the resurrection. That’s the version I’m inviting you to embrace. The original version. The endurable, defensible, new covenant, new command version” (p. 321; see also pp. 23, 293-299).

I disagree with the first seven of those points.

No Authors or Verses?

Regarding points one and two mentioned above, Stanley gave no Biblical proof that we should mention names of authors or speakers rather than name the book, chapter, or verse. He might have noted that the Lord Jesus Himself never quoted book, chapter, and verse. Jesus instead would say, “Moses commanded” (Matt 8:4; Mark 1:44) or “Well did Isaiah prophecy…” (Mark 7:6) or “Isaiah said…” (John 12:39, 41). But the reason He did not mention book, chapter, and verse is probably because those things did not exist then. While it is fine to quote the Lord or the authors of Scripture, we must be clear that these things come from the Bible. The Bible is the proof that the citations we mention are accurate. 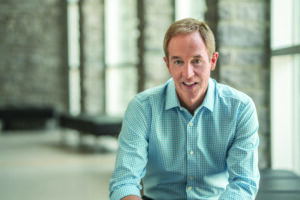 The fourth point, that the OT is less authoritative than the NT, is confusing to me. The word authoritative means “recognized or accepted as being true or reliable” (collinsdictionary.com). Is the OT less true and less reliable? If all Scripture is inspired (2 Tim 3:16), then it is all equally authoritative. Maybe Stanley means that much of the OT is not directly applicable, but is instead applicable by first discerning the eternal principle involved and then applying that principle to us today. But if so, why doesn’t he talk about how relevant or how directly applicable the OT is? Calling the OT less authoritative bothers me. The ice is thin when we separate out two-thirds of the Bible as being less true than the other third.

The idea that it is the authors of Scripture who were inspired, rather than what they wrote, the fifth point mentioned above, is bizarre. How can I know that Eph 2:8-9 is true unless the words themselves are inspired (i.e., God-breathed)? Oddly, one of the two proofs Stanley gives is Paul’s words, “All Scripture is Godbreathed…” (2 Tim 3:16). That verse refers to the Scriptures being inspired, not the authors.

The sixth point, in which Stanley denounces church attendance and obedience to God based on “what’s in it for [me],” is contrary to Scripture, which encourages rather than denounces self-interest. Jesus commanded us to set our hearts on heavenly treasure (Matt 6:19-21). Paul told us to seek to win the prize, the imperishable crown (1 Cor 9:24-27). Paul clearly was seeking those prizes (1 Cor 9:27; 2 Tim 4:6-8). It is a major emphasis of Scripture that self-interest should be one of our motivations in serving God (along with gratitude and love for God).

Shouldn’t unbelievers go to church to learn how they can have everlasting life? And once they come to faith, shouldn’t they continue to come so that they learn how to live the abundant life that Jesus offers and how to lay up eternal rewards? What is wrong with a desire to learn “what’s in it for us”? Stanley says that we ought to be calling people to love others (“What does love require of me?” pp. 245, 247-60). True. But loving others is good for us as well as for those whom we love.

I agree with the eighth point that the Christian life depends on the resurrection of Jesus from the dead. Of course, it also rests on Jesus’ sinless life, the miraculous signs that He did, His death on the cross for our sins, and the authority of the Bible as God’s Word.

What Is Stanley Seeking?

Now a few questions about what Stanley is seeking from the readers.

Is he saying that pastors should stop preaching the OT in their churches? He writes,

“I’m convinced our current versions of the Christian faith need to be stripped of a variety of old covenant leftovers…We are dragging along a litany of old covenant concepts and assumptions that slow us down, divide us up, and confuse those standing on the outside peering in” (p. 92).

Is he saying that there will be no temple in the Tribulation and in the Millennium (pp. 49, 65)?

Five final items before I close.

Item one: I had an uneasy feeling as I read this book. Not once in the text of the book does Stanley tell the reader the book, chapter, and verses he is quoting. He leaves that to endnotes at the back of the book. Is he implying that even when writing to believers, we should not give them Bible references?

Item two: I don’t see how anyone can understand the NT without having an excellent grasp of the OT. Yet Stanley’s book makes the OT look outdated and irrelevant. While I would not start a new believer in Genesis or Leviticus, I’d certainly want a mature believer to read and study every book of the Bible.

Item three: I was taught in seminary to avoid attributing dialogue to God. The reason is that the Bible tells us not to take the Lord’s name in vain. Stanley has a very odd fictional conversation between God the Father and Jesus (pp. 115-16). Cosner comments, “He is also too cavalier when talking about God. Case in point, his ‘conversation between the Father and the Son’ starting on p. 115 should horrify any Christian, where Stanley apparently imagines God the Father as a cross between a Harvard MBA and a used-car salesman, and Jesus as the ambitious but clueless go-getter. It’s appalling to hear any pastor be so irreverent.”3

Item four: Instead of encouraging Christians to defend the Bible against attacks to its credibility, Stanley encourages Christians to simply throw the OT under the bus as irrelevant to our faith: “When skeptics point out the violence, the misogyny, the scientific and historically unverifiable claims of the Hebrew Bible, instead of trying to defend those things, we can shrug, give ‘em our best confused look, and say, ‘I’m not sure why you’re bringing this up. My Christian faith isn’t based on any of that’” (p. 290).

Item five: Andy Stanley is not clear about Free Grace issues. When he discusses Peter evangelizing Cornelius and his household and then the Jerusalem Council, for example, he doesn’t say that all who believe in Jesus for everlasting life (or for justification) have it (pp. 117-30). I did not find a single place in the book where he laid out the faith-alone message clearly, even though this book has as one of its purposes to teach us how to evangelize people. He has the Apostle Peter speak about “my decision to follow Jesus,” which appears to be Stanley’s statement of Peter’s understanding not of discipleship, but of justification (p. 287). At the end of the book he seems to equate “what it means to follow Jesus” with “your faith” (p. 315). (See also p. 299, “embracing Jesus as Savior.”)

I do not recommend this book. I do, however, strongly recommend the book that Andy Stanley helped his father, Charles Stanley, write. That is the 1990 book Eternal Security. In the acknowledgement, Charles Stanley wrote, “I am grateful to my son, Andy, whose diligent research and keen insight made this book possible.”

2. This article is a revision of a Sept 25, 2019 blog entitled “Irresistible by Andy Stanley.”