In the Levitical sacrifices, the worshipper would offer up a body to God. An animal body. Oxen, sheep, goats, lambs, and birds.

The worshipper would go to the tabernacle and later the temple and present the animal to the priests. The animal would be killed, cut up in the prescribed way, and the priests would offer the body parts to God.

Did you know that something similar happens in sanctification?

In v 12, Paul urged the Romans not to let sin reign in their mortal bodies through obeying the body’s lusts. It was their responsibility to fight it. Then Paul specified the location of the battlefield:

I think “members” is an archaic translation. When people hear the word “members,” they think of an individual who belongs to an organization. But that is not what Paul or the translators meant. What they meant is the less common English definition of “member” as “a body part or organ.” The Greek word melos means “a part of the human body, member, part, limb,” or literally “of parts of the human body” (BDAG, p. 628). Several commentators interpret Paul to say you should offer your whole self to God. While you should do that, I think that obscures Paul’s point. As Jewett says, melos refers “more specifically to limbs and organs with which humans carry out tasks and enter into relationships with others” (Jewett, Romans, p. 410). Paul is talking about your body parts. That’s where the battle is.

Likewise, I think “instruments” also fails to convey Paul’s point. The Greek hoplon is specifically a tool of war, “an instrument designed to make ready for military engagement, weapon” (BDAG, p. 716). Armchair historians will recognize a cognate word for the citizen soldiers of Greece, namely, the Hoplites. Your body parts are tools of war. But which side are they fighting for?

Remember that Paul is describing sanctification as a spiritual battle. Sin is not a lapse in ethics, so much as an evil power set to dominate and enslave you. As Anders Nygren writes, “To him sin is not basically separate moral missteps; but sin is a power under whose bondage man lives. It is to set forth this character of Sin as a hostile power that we capitalize the word” (Nygren, Romans, p. 242). You were under bondage, but no more. Now you’re free. However, the battle for dominance rages on, and Paul is calling you to fight back.

And where does that battle occur?

So I agree with Jewett when he concludes, “It is therefore likely that Paul has actual bodily parts in mind that can serve as ‘instruments of wrongdoing by sinning’” (Jewett, Romans, p. 410).

The NT believer presents himself alive from the dead, and offers every part of his mortal body as a weapon to be used by God. “He who is not with Me is against Me,” applies to your eyes and tongue and hands (Matt 12:30a).

Have you ever thought of sanctification as giving your body parts over to God? Strange, I know, but as Michael Eaton noted:

Paul loved to consciously give his body to God. When he was in prison he said ‘Christ must be magnified in my body’ (Phil 1:20). His body must have been getting rough treatment at the time. But he was happy to have his very body at God’s disposal. He told the Corinthians, ‘Glorify God in your bodies’ (1 Cor 6:20) (Eaton, Living Under Grace, p. 69).

So how do you do that? How do you present your body parts to God?

You cannot literally bring them to a physical location such as the temple. So how do you do it?

The word is paristēmi. For this verse, BDAG favors the meaning of “put at someone’s disposal” (BDAG, p. 778). But how do you hand over your body parts to God?

Hodges translates this as a “turning over,” but that raises the same problem. How? In what sense?

Maybe the best way to understand paristēmi is in Jewett’s and the KJV’s translation of yielding to God. In other words, the offering of your body parts to God happens at the level of your mind. You self-consciously put your body parts at God’s disposal, choosing to turn them over to His service (see Romans 8 on the Spirit-led life).

Were your hands used for picking-pockets? Then put them at God’s disposal to do honest work (Eph 4:28) and to feed and clothe the poor (Prov 19:17).

Was your tongue used to slander and tell dirty jokes? Then turn it over to God for thanksgiving (Eph 5:4; Jas 3:6) and encouragement (1 Thess 5:11).

Limb by limb, sin will try to dominate your body. But in this spiritual battle against the domination of sin, as you yield your body parts to God, you can literally “win by a nose.”

Shawn Lazar (BTh, McGill; MA, VU Amsterdam) is the Editor of Grace in Focus magazine and Director of Publications for Grace Evangelical Society. He and his wife Abby have three children. He has written several books including: Beyond Doubt: How to Be Sure of Your Salvation and Chosen to Serve: Why Divine Election Is to Service, Not to Eternal Life.

How is Judgment in James (and elsewhere) Toward Believers to be Understood?

Welcome to Grace in Focus radio. On today’s episode, we will hear Bob and Shawn discuss judgement in the book of James. Specifically, James 3:1...
January 25, 2022

Throwing an Ambassador into Jail? (Ephesians 6:20)

My dad was a career Army man, so while growing up I lived in some foreign countries. I remember in one country I was given...
January 24, 2022 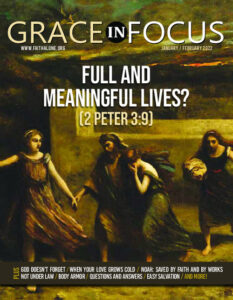